Featured on walls, in hallways and under staircases throughout the DV campus, tape art made by AP and Advanced Art students has captured and magnified messages relevant to today’s world, ranging from climate change to student stress. These bold, cathartic pieces of public art, made painstakingly with blue masking tape over a course of two weeks, instigated conversation and provoked contemplation amongst Dougherty students. 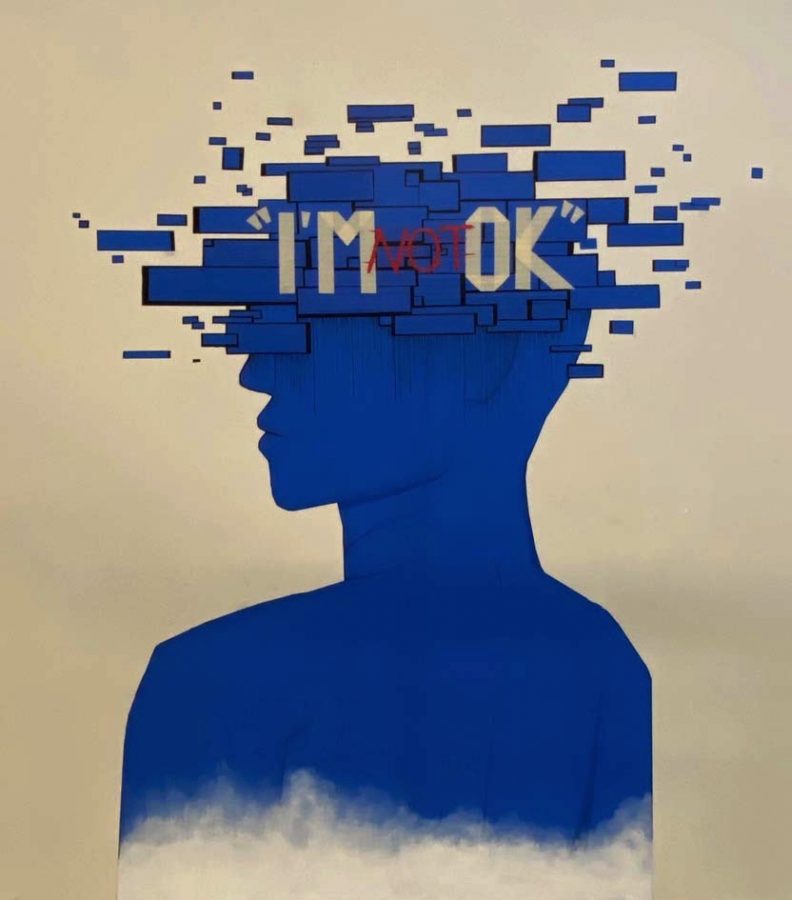 Seniors Jennifer Gee, Aarushi Vekaria, Tracey Ley and Tejal Thakral created the piece outside the 1000 building. Blue masking tape forms the silhouette of a human head that explodes into glitches.

The decision was obvious for senior Jennifer Gee: her topic would be mental health. It seemed clear, almost essential, for it to be so. Looking around herself, Gee saw her classmates struggling with heavy workloads, bearing up under stress of being a high school student — and a human being. That was the key: that everybody was going through some difficulty.

“Even though you may be okay on the outside, you have glitches on the inside,” said Gee. “Our intent was to showcase our interpretation of mental health by creating a figure that is genderless and faceless.”

The image takes up an entire wall in the 1000 buildings, towering over the students almost overwhelmingly. It’s a strange contrast, and one that makes a lot of sense: the tape art imitates the looming presence of stress, while also conveying the prevalence of being scared and uncertain.

“By doing this type of “graffiti” art, I guess you could say, I can reach out to a bigger audience,” said Gee. “[Our group] said, go big or go home. Try to make the biggest thing possible because none of us no one in my group has worked to that type of scale.”

Their first step was sketching out a rough draft; the second was plastering the tape to the wall — a “very hard,” time-consuming process. Gee and her teammates layered tape to create a 3D effect and used Posca paint markers to delineate the intricacies of the glitches.

While the tape art communicated a message custom-made for DV, mental health is a common theme through Gee’s work. One piece, for example, meticulously produced in black pen, portrays a stark human arm filled with gears and robotic components, made when Gee was feeling “disconnected” and “distant.”

“It’s just the social stigma around mental well-being and having that 4.5 GPA, taking five APs, just trying to flex on each other with academic prowess,” said Gee. “It just doesn’t lead down to a happy road.”

Making art is Gee’s method of staying on her own “happy road.” Sometimes she’ll find that her feelings are difficult to put into words — as if her emotions were a confounding puzzle of rectangular glitches, like portrayed in “I Am Not Okay.” By drawing, usually with her favorite medium of pen and pencil, Gee releases her pent-up emotions onto paper and examines them from there.

“I’ll get a sense of relief and understanding of what I’m feeling,” said Gee, who has been making art for as long as she can remember. “And if people ask me how I’m doing, I’ll just show them a piece of work that I did at the time. And, like, try to interpret as well.”

Gee is careful to emphasize that one doesn’t have to “be okay” to be on a happy road. Rather, it’s about maintaining a balance and finding the necessary support system.

“The support system here [at Dougherty] is amazing and great. It just leads up to the fact that people need to reach out — and I don’t think people will do that,” said Gee, who has struggled with depression and insomnia herself.

At school, Gee believes that teachers can play an integral role in easing their students’ mental health by lifting stigma around the issue: “Say, it’s perfectly okay to not be okay. Just openly express that teachers themselves have bad mental health days as well. And that it’s a completely human thing.” 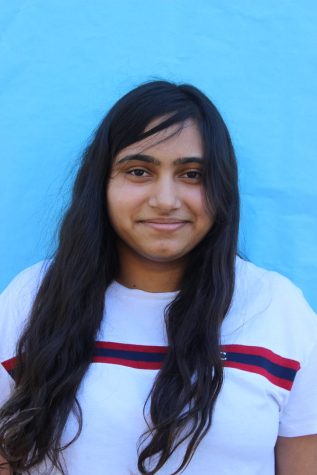 Teju joined the Tribune because she enjoys writing and the paper gives her the opportunity to write about various topics. This is her third year in Journalism and it is definitely her favorite class. Teju loves... 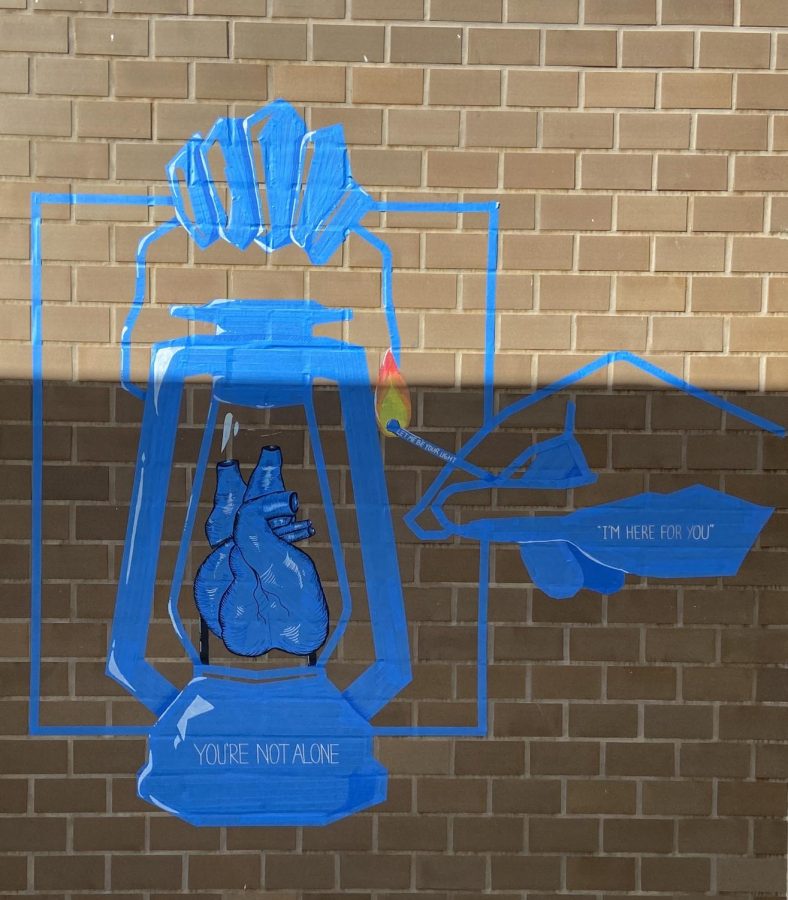 Thanvi Anand, Rhea Park, Dorothy Yeung and Calista Koo created the stunning piece on a brick wall. A heart is formed, encased within a lantern. Inscribed in small letters on the lantern: “You’re not alone.” On the reaching hand: “I’m here for you.”

Thanvi Anand’s first dalliance with public art was scribbling family portraits on her living room walls when she was 3 years old. Her art has undoubtedly matured since then, but has managed to retain that authenticity.

“Art was my first language,” Anand reminisces. “It’s the way I express my feelings.”

And in striving to communicate intangible, yet essential, ideas through her art, Anand and her group — Rhea Park, Dorothy Yeung and Calista Koo — constructed a momentous, surreal-esque tape art mural, which explores the positive impact peer support and constructive communication can have on young people making their way through high school.

The tape art itself is exquisite, and deceptively simple. One hand carries the focal image — a lantern holding a beating heart — while another hand lights the lantern with a single flame. Three words offer reassurance to onlookers: “You’re not alone.” The hands frame the heart, almost sheltering it, lending a powerful, comforting message: that someone’s always there for you.

Weaving in such abstract messages through art is nothing new to Anand: she loves to create pieces that hold potential for versatile interpretation. Drawing inspiration from her favorite artist, Alphonse Mucha, a renowned Czech Art Nouveau painter, Anand believes that art is most powerful when it sparks unique reactions in its observers. Some of her other works include surrealist, intimate portraits, and sketches of nature with underlying themes, for example.

Since she understands the distinct personal struggles of students at Dougherty, Anand wanted to use her philosophy to create a tape art project that projected a universal message about student stress, but with a personal angle.

“I think everyone can relate to the fact that stress can impact you in a negative way, and I think that peer support can resolve this stress,” Anand explained.

In fact, peer support has been a large influence in Anand’s own artistic journey, and helped her discover art as an outlet for her own stress. She described how seeing the remarkable talents of artists her age when she began taking art classes in elementary school inspired her to find her own voice in her work alongside them. Even working on the tape art with her group was an exercise in support: Anand describes how collaborative the entire process was, from wild conception to careful execution. And amidst the often toxic background of parental stress at Dougherty, Anand is particularly thankful for her family’s support of her endeavors.

“I’m very lucky to have supportive parents and friends; I think it’s a very important aspect of our lives to have that support system,” she described.

Ultimately, Anand hopes that this tape art project, and her many other pieces to follow will start conversations in her community. Already, Anand has been reached out to by fellow students who have connected to her tape art, something which makes her immensely proud and she hopes will continue.

Anand reflected pensively, “In the time we’re in, there are many different perspectives and opinions coming out, and we need to continue on this path and start important conversations through art.”

Teju joined the Tribune because she enjoys writing and the paper gives her the opportunity to write about various topics. This is her third year in Journalism and it is definitely her favorite class. Teju loves...