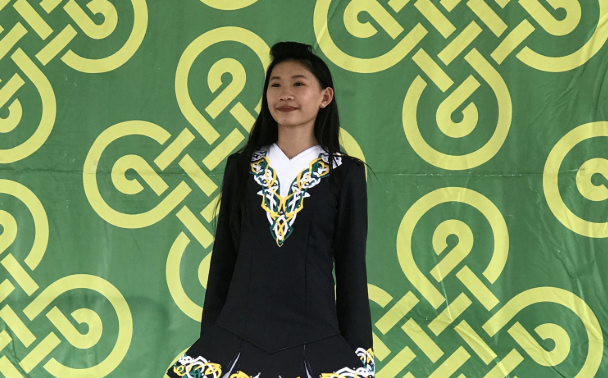 “I love how different it is and how I can do all these crazy things and beats.”

Jessica Lee: “I started [Irish-dancing] in third grade in the community class offer[ed] through the city. I loved it almost immediately. To be honest I love how different it is and how I can do all these crazy things and beats. Being thought of as unique isn’t that bad either.

As usually a solo dancer, Irish dancers don’t need to focus on matching our moves to others, but instead trying to look more on time and better than everyone else. That’s sort of the main goal. When we do team dancing it’s so much fun! While you still have to look better than the other teams, you get to focus less on how high you can get that jump or how turned out you can be and more on being in the right place at the right time and being in sync. Watching and doing team-dancing reminds me of a well-oiled clock.

I love doing the simple stuff like just kicks, slides (not like on the floor slides but with your feet to move), and jump-2-3’s. Hard-shoe I love trebles, stamps, and clicks.

[My proudest moment in the sport] I can barely remember because of how bad a shape I was in: I was at a feis (Irish dancing competition) and I was almost delirious with a fever. I felt terrible and I thought I danced so badly, but I ended up winning almost all of my dances! It was actually all sort of funny later on.

The costumes nowadays are much better looking than what they were in the last decade in my opinion. They liked using shiny metallic plastic and sequins a lot which isn’t my number one personal favorite look. When they began doing the Celtic knots in actual embroidery again and using Swarovski crystals, they looked better in my opinion. I love the costumes but I know that it sure isn’t everyone’s cup of tea.

I sure as hell have gotten much more flexible and fit since I started Irish dance. I’m not going near the sappy stuff but I have become more motivated. I still am a couch-potato at heart but I get up to work (sometimes) in the thought of becoming better.

With St. Patrick’s day coming up soon we are booked as always. Also, next Sunday I have a competition coming up!