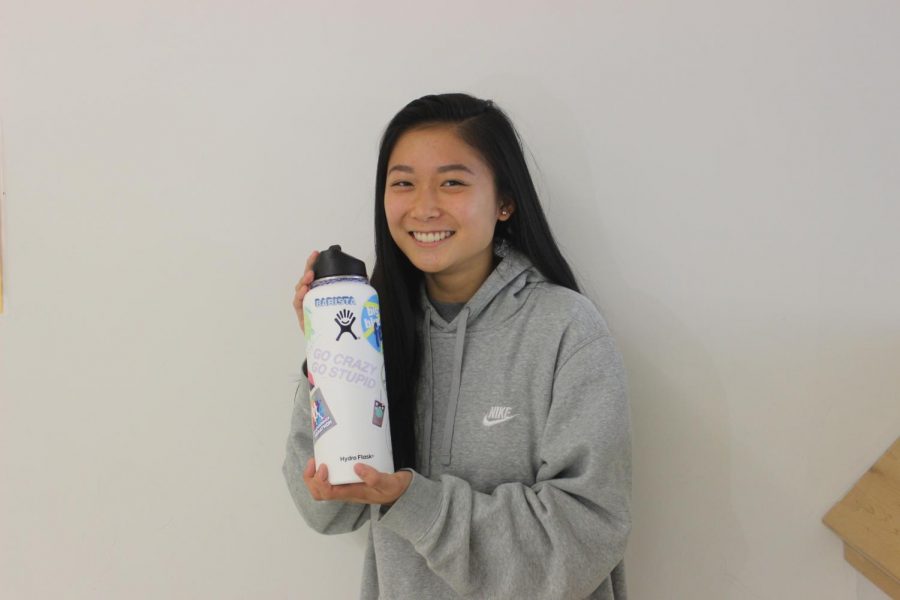 “My first sticker was the 2020 one because I was a class officer last year. I just took one at the very beginning of the year and pasted it on [my Hydro Flask].”

“I didn’t think of putting stickers on until I dented it … I feel like I’ve grown to accept the fact that it’s, like, a little broken.”

“This one [means the most to me]. It says ‘GO CRAZY GO STUPID’ on it. It’s my favorite video on the Internet ever.”

“The other one that means the most to me is probably the one that says, ‘I drink too much and that’s an issue’ — and that’s with iced coffee, not alcohol. And it’s because I work at Starbucks and I have people say that I drink a lot of caffeine, and I feel that deeply represents me.”

“My other favorite one would be the one that says Planet Dougherty on it because I got to plan it last year, and it’s kind of like my baby. It’s the best dance that I’ve ever planned and the first event that I fully, fully planned.”

“A lot of [the stickers] are, like, Dougherty stickers because they’re all related to things that I’ve participated in, like TVLC [Tri-Valley Leadership Conference] … Big Blue Fest … Festival of the Arts.”

“My Hydro Flask is white, so it’s very plain on its own. So I think, like, putting stickers on a white Hydro Flask just makes it stand out a lot more and easily identifiable … Everyone kind of knows this is my Hydro Flask because of all the things that are on it.”