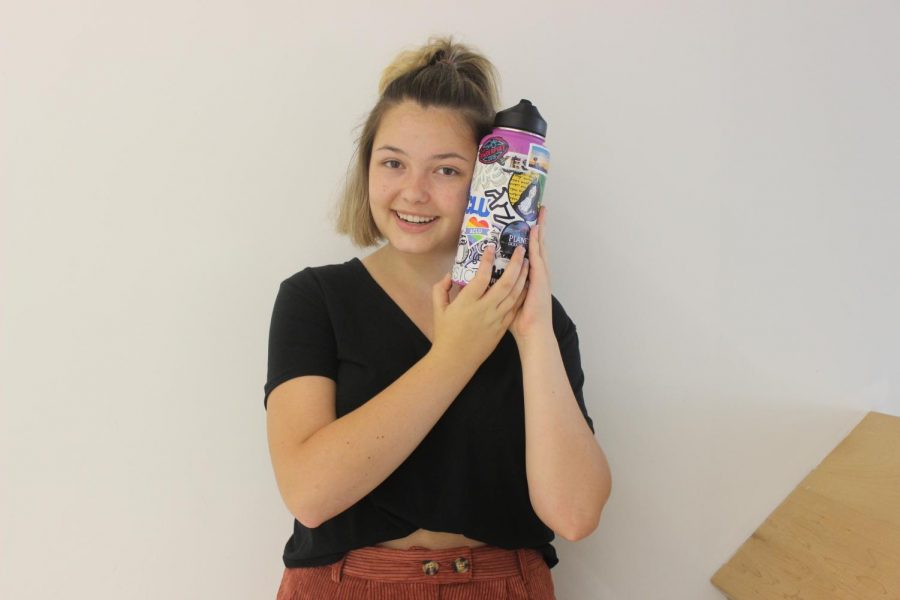 “Yeah. So, this is the third Hydro Flask that I’ve owned, because the first one I left at a dance convention. And the second one fell off a speedboat in Italy, and so it’s somewhere in the Mediterranean Sea. But I’ve had this one since sophomore year. My grandparents got it for me, for my birthday. But with each Hydro Flask, like, my obsession with covering it with stickers has grown. It started as just, like, in middle school everyone was getting their Hydro Flask and putting their stickers on it. And it was like such a fad. And I was like, ‘I need one too.’ But like now it’s become kind of like a sense of identity for me. And so it’s just covered with things that I like and different things that have meaning to me and collectors items like the Wils. I have so many Wils — wait, I’m going to count. I have seven on here, and then I have two more at home. Baby Wil is my favorite. But yeah, the Wils were the first thing I put on this Hydro Flask because I thought they were adorable, and, I don’t know, just kinda like the crackhead energy really felt reminiscent of who I am. So it felt apropos.

“I have a lot of stickers that my best friend Jill has made. [It’s] quirky and I’m quirky and that’s our whole friend group. [There is the] Class of 2020 sticker, [the] DV High Till I Die sticker. Well, she made the Powderpuff sticker that I have on here. She got me my Ben and Jerry’s Half-Baked sticker, which is probably one of my favorites, because sophomore year was filled with … ice cream nights and we would just like go get a pint from Safeway, and I had literally a box of spoons in my car for us to just sit in my car and listen to music and eat ice cream and wallow in self-pity. But that’s where a lot of my friendships with the people who are my best friends now developed was those nights sitting eating ice cream. And so this one is Ben and Jerry’s Half-Baked, but my very favorite is Ben & Jerry’s Milk and Cookies ice cream. Half-Baked is a close second. I also have a bunch of ACLU stickers on here, which is cool because the summer after my sophomore year, I did a bunch of stuff with ACLU. So, I job shadowed the Utah-specific ACLU. So they gave me a bunch of merch there. And then I did the ACLU Summer Advocacy Institute, which was so cool. And they had a bunch of free stickers for us. Yeah, it reflects my passion for advocacy and [my] political interests. And maybe one day I’ll be working for the ACLU. So it’s also a dream on my Hydro Flask.”

“And then I have just a couple of others from different adventures. Mount Hermon was our leadership retreat last year. There’s a snowboarder [sticker] that’s covered mostly but that’s from Tahoe. My family used to go to Tahoe all the time. I have a Clyfe sticker, which was my committee [during] sophomore year, and we made stickers because we were such a cult, even within the greater codes of leadership, which was so fun. I have two stickers from the YouTubers Yes Theory. One of them says ‘Seek Discomfort.’ And I love that because my ballet teacher would always tell us when you go to a place where you feel uncomfortable, and you have to figure it out, that’s where you grow the most. And so it was this thing I had grown up with and then it was reflected into just a little sticker I could put on my Hydro Flask and I loved that. This one’s a moose. The moose head is covered, but it’s from [when] I went to the Springfield Art Museum in Utah with my grandparents and I got that there. I really really love my grandparents. I’m super close to them. And so I wanted something to represent them on here. And then there’s all sorts of school event ones.”

“There’s DVHS GSA stickers. There’s Aquapalooza, which is the dance that I planned my freshman year, but we have a million stickers leftover. [There’s] Contraband stickers, Planet Dougherty, there’s, like I said earlier, the Powderpuff one, and then there’s show stickers from the shows I’ve done with DV theater, so LOVE/SICK and Rent. We didn’t make show stickers for other ones. I had some of the senior stickers on here. And there’s also a voting sticker on the bottom, which is covered up by a sticker from my leadership teacher whose also a wedding videographer. This is his brand sticker. That’s from when I left my Hydro Flask in the leadership room. And it was the day before Thanksgiving break, where on Friday, school got canceled because of all the smoke from the fires. And I had left my Hydro Flask in the leadership room, and I was going to London and I was like, ‘Mr. Bowen, I can’t go to London without my Hydro Flask. Please can you retrieve it, and leave it somewhere for me?’ And he was like, ‘Yes.’ And he left it with a Matter Video sticker. And then the last one that I have on here is my Louis XIV AP Euro group chat sticker. My AP Euro group chat is where I met two of my best friends. We still talk in that group chat, and debate about politics. That class has made me the student that I am today. And so Jill made us all stickers for the squad, and it has Louis XIV. And then behind him is all our different group chat names, some of which are really clever. But yeah, so my hydroflask just a walking summary of a lot of the parts of who I am. And it’s a constant reminder of dreams and nostalgia and memories. And it’s a great conversation starter. And that’s all the reasons I love it.”