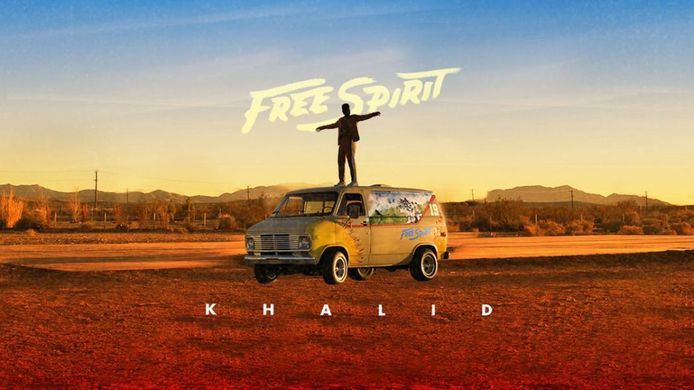 Khalid’s “Free Spirit” resonated well with some listeners and not so much with others, with each side bearing its nuanced reasons for its beliefs. (RCA Records)

Khalid’s “Free Spirit” resonated well with some listeners and not so much with others, with each side bearing its nuanced reasons for its beliefs.

… confines his true sound and emotions

Talented singer-songwriter Khalid’s highly anticipated sophomore album “Free Spirit” meets expectations but fails to surpass them as the music is very cautious, producing an enjoyable yet rather conventional album. The 21-year-old produced a good album to vibe to, that was decent overall. The themes of love and relationships are explored in the 17 tracks, but the album still misses raw emotion.

“Free Spirit” showcases the growth of Khalid as an artist and as a person, but the album itself lacks the meaningful lyrics and strong vocals that are featured in “American Teen,” his first studio album. He could have done more during the two years since “American Teen’s” release.

Some lyrics were personal, but many still lacked depth. The beats and melodies retain Khalid’s ’90s R&B vibe, but sounds of generic pop slip through. “Free Spirit” loses all the strengths of “American Teen,” such as the personal, relateable lyrics, strapping vocals, original sounds and consistency throughout the album.

As much as I respect Khalid, “Free Spirit” is nothing more than a good album to listen to while hanging out with friends during a summer night or during a drive.

Many songs from his EP “Suncity,” which released in October 2018, transferred over to this album. Fans were excited to hear new music from Khalid, but “Suncity” ended up generating little buzz.

Possibly shadowed by fellow performer Billie Eilish’s new album that was released a week prior to “Free Spirit,” Khalid’s album lacked variety between tracks. The melody overpowered his vocals, shifting the listener’s attention away from the lyrics.

As someone who has listened to Khalid since the release of “American Teen,” I, like many other fans, was expecting an album with more unfiltered emotion and powerful vocals. Although a few tracks on “Free Spirit” do meet these expectations, I was ultimately disappointed when the album wasn’t as good as I anticipated it to be.

Obviously his sound is going to change over time, but he didn’t have to scrap so much of the relatable lyrics and non-generic pop that earned him his popularity.

However, this mood does make a couple of appearances on “Free Spirit,” mainly in the first and the last tracks. Ironically named “Intro,” since the rest of the album feels inconsistent, the first track does showcase his beautiful vocals and powerful lyrics.

This opening track ends up being one of the better songs in the album. He sings many emotional lyrics in this song such as, “Lately, I haven’t been doing very well / That’s the difference between heaven and hell / I feel heaven when you’re here with me / I feel hell every time you leave.” The strongest line in the song, and quite possibly even the whole album, is when he sings, “Now I gotta find my worth,” which is accompanied by a buildup leading to a beat drop as he stretches the note on “worth.” This track sets the mood for the rest of the album as Khalid becomes a “free spirit” after going through a tough heartbreak.

Some of the concluding tracks showcase similar sounds to the ones heard in the end of “American Teen.” “Alive” and “Heaven” are similar to “Shot Down” and “Angels” as he sings about death and love.

In “Alive,” Khalid sings “Grim Reaper / Just give me one more night / I need another chance to say goodbye / I shouldn’t have to die to feel alive.” This song demonstrates Khalid’s urge not only to live, but to truly be living. Contrasting this idea, Khalid sings in “Heaven,” “Oh, heaven make me an offer / Lord, there’s nothing for me that I’ll get / Heaven, if you come over / Oh I know how to make us disappear.” Khalid is ready to stop living on earth and to just go some place better, such as heaven. These tracks give off the same depressing-music-video vibe as many tracks from “American Teen” do.

The three aforementioned tracks are as far as the raw emotion and hurt in the album goes. Khalid’s brand for the past couple of years has been deep lyrics that you can relate to while vibing with the sound.

“American Teen”‘s sound can be described as a coming-of-age story flooding with emotions associated with introspection, hurt, exhilaration and love, while “Free Spirit” sounds like “lo-fi hip hop radio” sprinkled with too many lyrics.

Caroline joined the Tribune during her freshman year, unaware that she'd be working on a school newspaper for the next four years. All she knew is that she enjoyed writing and taking photos. As a staff writer,...

Ravaged by a seemingly rocky transition out of debut album “American Teen’s” high school experience, the El Paso native plays with multiple musical genres in his 17-track release, with synth, jazz, pop and hip-hop each contributing its own cultural significance to the meaning of their associated songs.

“Intro” begins the album on a heavy synthesized bass sound, ushering in the lamentation of an irreconciliable romance. From the beginning verse one senses the conflicted nature of his emotions: his self-doubt — “Say you can’t deal with me no more” — is juxtaposed by distrust as he calls, “I never know what you feel no more.” His confession at the climax of the song — that “I feel heaven when you’re here with me / I feel hell every time you leave” — is emotionally driven by growing instability in the bass and the desperate employment of his faltering voice.

Delving deeper into his conceptualization of love, Khalid explores emotional self-care in “Self” and “Alive.” His lyrics contain as many contradictions as they do regrets, and while they — purposefully — fail to resolve logically, the important element of frustration is clearly communicated. In “Self,” for example, this frustration stems from self-contradiction: “I’ve ran away from love / It’s gettin’ hard for me to breathe / ‘Cause the man that I’ve been runnin’ from is inside of me.”

Aside from its exploration of romantic and self-afflicted dead-ends, “Free Spirit” remains most strongly driven by Khalid’s trademark hip-hop/pop sound. The associated songs range across the genre spectrum, with “Better” taking on the down-low mood of hip-hop and “Talk” tinkering with jazz. A majority of them — “Bad Luck,” “Right Back,” “Don’t Pretend,” “Outta My Head,” “My Bad” and “Saturday Nights” (standout from 2018 EP “Suncity”) — stand somewhere between, substantiating the album’s most melodically pleasing elements.

In expressing the diverse emotions of regret, infatuation and romance, Khalid calls in a wide set of instrumentation. Such reflects both the album’s theme of emotional maturation and Khalid’s improvement in no longer solely relying on raw vocal talent.

Some opine that there’s nothing that particularly stands out in the album, but that’s not an issue to me. In fact, with high and continually rising popularity among teenagers, it would be particularly unwise and problematic for Khalid to play the role of the intellectual. As long as he fulfills his musical niche of reflecting the everyday experiences of young listeners, he deserves to — and will — thrive.

Other critics claim that there isn’t a consistent theme running through the album. This is misconstrued: the guiding concept is the young adult experience, which, while disillusioning and scattered, can ultimately be simplified as one full-cycled pursuit of love, in one form or another.

With “American Teen,” “Suncity” and now “Free Spirit,” Khalid’s music has imitated, celebrated and expressed life. In a decade juxtaposed between materialistic pleasure and emotional displacement, it’s all the more suitable. So when Pitchfork writer Alphonse Pierre criticizes, “Khalid feels perfect for an era where some of the most popular music is popular because it fits onto Spotify playlists meant solely to be used as background noise,” he’s exactly correct.

Art shouldn’t have to fantasize.

What we need to hear — what music needs — are the euphemisms and jargon of someone just like us, “burning rubber on the Michelin” (“Bad Luck”) with “phone on silent” (“My Bad”). We need Khalid, his timbre tranquilizing us as it loops on repeat.