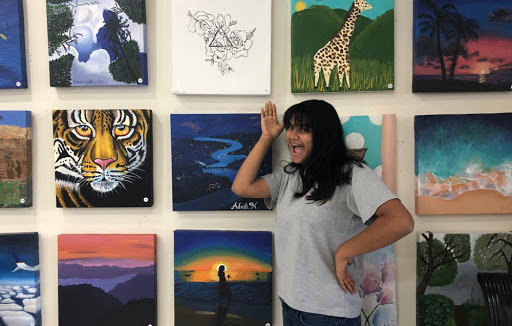 “Art is an emotional outlet.”

“To honest with you, I really don’t have a style when it comes to those things. The thing is, if you’ve seen my art, like my flower paintings, those are a lot more simple. And then there’s a lot more other things that I was taught that I really liked, like painting depth, capturing light, and stuff like that … and you can call so many things art. And so if art itself is such a broad thing, then I can learn a lot of things in that … if I have the opportunity to learn it, I’ll try it. Because my teacher, he does a lot of different things. And there’ll be some things I’ll see on the internet … But then it’s never going to be the same thing. I try my best to make it kind of different … I’m going to try something else. I’m going to just incorporate my own style and to make it to my own liking, rather than a specific box, you know? … You get to pour yourself into something … and I’m a person who feels a lot of things, because, emotionally, I have a lot of things to say, and a lot of things to do. It’s kind of like a release which I really enjoy … You can’t describe [some] things, but you can draw something that looks really beautiful to you. And so it’s kind of an emotional outlet. People get to know how I feel. And this is exactly how I’m going to do it. And even if I don’t share it, it’s for me, and that’s what I personally like. I was doing a painting that I just finished. We were supposed to do splatters everywhere. You know, it’s [splatters], really unpredictable. So I when I was doing it, I accidentally got a perfect dot into the eye of my painting … I was like, ‘Oh my God, no,’  and I could have gotten rid of it … But then I saw it was perfectly placed and I thought, ‘Whoa, that’s good’. So I just took the same color and put it onto another one.”