Opinions: kneeling during the national anthem 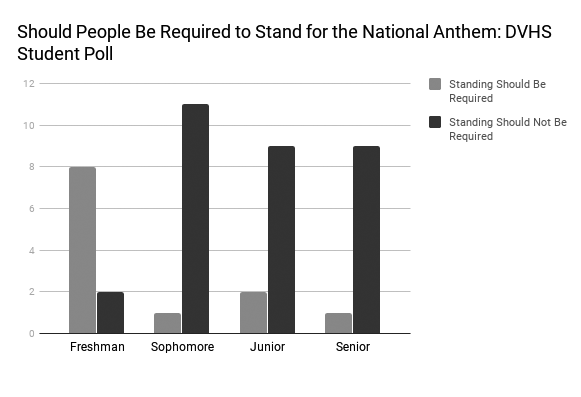 Refusing to stand for the national anthem is completely justified because it generates meaningful conversation and is a legal form of protest according to the First Amendment.

Former 49ers quarterback Colin Kaepernick first refused to stand during “The Star-Spangled Banner” on Aug. 26, 2016, in order to protest racial injustice and police brutality in the United States. Since then, the controversial topic regarding whether citizens should be required to stand for the national anthem has emerged throughout the nation. Many people believe that the United States is not living up to its ideals of universal freedom, liberty and justice. Currently, many NFL players including Kaepernick and Broncos linebacker Brandon Marshall have been kneeling for the national anthem. Each player kneels for the anthem for issues such as social injustice. Others believe that not standing for the national anthem shows disrespects the flag and members of the armed forces.

“You can criticize their speech but don’t ban their speech,” said sophomore Mustafa Hussain.

However, these actions should not be overused to the extent that every other day, a student at school is kneeling during the anthem. They should only be done when the national problem has reached a new height.

When a popular figure such as an NFL athlete refuses to stand for the national anthem, it leads to greater education of the audience when more people become aware about the national issues.

“Other nations are surprised we are very mechanical and robotic about it. I believe we all have the freedom to protest,” said AP World Teacher Evan Liddle.

In the First Amendment, the freedom of speech is stated in the list of natural rights for a citizen. Even former President Barack Obama acknowledged that Kaepernick was “exercising his constitutional right to make a statement.” In addition, a letter signed by 35 veterans stated that “there is no finer form of appreciation for our sacrifice than for Americans to enthusiastically exercise their freedom of speech.” All these examples show that kneeling during the national anthem is supported by the First Amendment.

Kneeling during the national anthem educates the public about events occurring around them and is clearly protected as an indirect form of the freedom of speech. An individual choosing to use their rights is critical for encouraging change in the subject of interest. 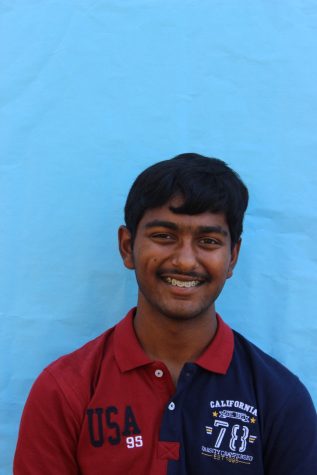 Ronit chose the Tribune as an option between band and Journalism as an elective for freshman year. He really loved the class, so he committed to it for his entire high school career. Ronit was assistant sports...

America is the land of the free and the home of the brave. The emblem of this sentiment is the American flag: a symbol of American lives lost in wars, a icon of justice, a representation of democracy around the world. The flag is of the utmost importance to all patriots, and the things it represents cannot be disrespected.

In America, the first Amendment protects your right to sit down. And this is what makes the flag so powerful. The idea that Americans stand by choice is what makes it significant. But in today’s political discourse, people are taking universal American values of democracy and justice and staining them on a political backdrop. Let me be firm: the flag is not a tool to play politics with. It is mine, yours. It is every immigrant and every citizen’s.

Standing for the flag is what unites Americans. In a politically polarized world, discourse seems to peer into every corner of American life. But the Anthem, three minutes of reflection, allows us to remember the ideals of American democracy. I may not respect Donald Trump, but I respect the system that put him into power. I respect the system that constantly checks his power, stymies his plans and stalls his vision for America. It’s the difference between a monarchy of the past and the government the founders established.

The flag represents the sacrifice of American soldiers. Brave men and women have been shot and killed defending  the flag on their uniform. When you kneel, you are taking their nonpolitical immolation and dirting it.

Junior Aiden Vehemente says, “I think it’s disrespectful, but I don’t think anyone has the right to tell them not to kneel.”

When you kneel, it’s un-American. The founding fathers gave you a forum to discuss this, and it isn’t on the graves of fallen soldiers. If you want change, start grassroots movements, elect new officials, change laws. A key other part of the First Amendment, the right to petition the government, allows you to do so.

As Congress declared in 1782, “The colors of . . .  those used in the flag of the United States of America. White signifies purity and innocence. Red [represents] hardiness and valor and blue . . . signifies vigilance, perseverance and justice.”

That, despite what people believe, is what our flag and what our anthem stand for. It is what we should stand for.