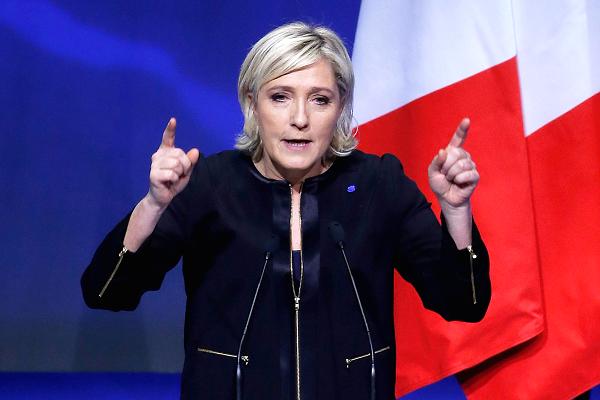 Le Pen is not Donald Trump; the wrong conservative won

Americans salivate at the prospect of a leader that is competent in the slightest way, knows history and commands policy like an extension of their own body. Instead of someone who could pass this basic litmus test to the Oval Office, they got Donald Trump. Marine Le Pen, a former French presidential candidate and head of the National Front, a right-wing political party, may be an ideological counterpart, but she is no Donald Trump.

DV as a campus is ultra-liberal; conservative thought cannot flourish here. But it is essential to view Le Pen as a strong conservative pioneer, and not a mindless demagogue. Sentiments around the campus reject the slightest sign of the right-wing, but ignore the valid points. It was physically hard for me to admit that Le Pen’s policy is more straightforward than Micron; It is wrong and dangerous only see one side of the spectrum.

Voters across Europe are readily making populist choices; conservatism is a new mainstream, and the liberal order is facing resentment by layman voters. In the wave of populism sweeping Europe, voters are confronted with an ideological battle between left and right, blue and red. Look at the policy implications of the conservative Brexit move, and the Turkish referendum giving the president dictatorial powers. However, in the case of Donald Trump, the choice was his ability; his ability to set aside the partisanship and vulgarity and govern all 50 states, red and blue. The bar to be president should not have been lower. Voters were tasked to weigh the risks of a demagogue with little sanctity for the country’s constitution against a career politician.

In the case of Marine Le Pen, this is not an issue. In all counts, she is more qualified that Macron, and Macron appears to be the Trump-like candidate. He’s a former investment banker, so all the critiques that applied to Donald Trump’s wealth are applicable here. His post in the government was overseeing the slow-growing French economy, and with no major successes. He is a mannequin, a candidate to fill the political void.

When Francois Hollande was entangled in a corruption scandal, Macron was the liberal standard bearer, despite his place on the spectrum closer to centrist. Hollande was the former president, a member of the Socialist Party, who despite making liberal strides, was a massive failure. He ushered in the legalization of gay marriage and reduced the presidential salary, but failed to address terrorism concerns and his promise on increasing jobs was not delivered. He is entangled in two scandals. Firstly, he had a very public affair with actress Julie Gayet. He also put his wife on a government payroll despite her having no clear duty and nepotism was implied.

As New York Times mentioned in an Op-ed, Macron claims the message of the conservative Charles de Gaulle, but the liberalism of Emile Zola. De Gaulle was a strong conservative that essentially created the current Fifth Republic of France. Zola is a realist civil rights pioneer. He gained fame when he published “J’accuse”, a criticism of the Dreyfus Affair(Military Officer Dreyfus was arrested and tried for treason on anti-semitic grounds in 1984). The public outcry started by Zola eventually lead to his pardon. He has criticized Trump for his “obscurantism,” but provides nothing elucidating in his own policies. As one pundit put it, he’s appealing only because he is “general inoffensive to the entire population.”

For all liberals know, Macron is a Trojan horse, an unknown, a risk to let into the capital. But with Le Pen, you get what you buy. Le Pen is being unfairly portrayed as far right, to fit the narrative that there truly is a wave of nationalism. Le Pen herself transformed the National Front into a party of conservatism. She removed those upholding Vichy sentiments and anti-semitic beliefs, kicking out her own father.

The papers still call her racist, especially with her calls to ban Muslim headdresses from public. However distasteful as this is, especially from an American perspective, this is a mainstay in Europe. Francis Fillion, a former French Prime Minister, did this as well, and the European Court of Human Rights upheld the ban currently in action in France. This is not a fringe view, but a maintenance of the status quo.

She understood economics better than her investment banker opponent. The European Union has given too much unchecked power to Brussels and Berlin. The core premise of the E.U. favors finances over the good of the people. Le Pen is right about the euro; it is drowning he french economy and sinking every member state. The voters of France have chosen a candidate who cannot fill the shoes of the French presidency. Le Pen is competent, educated and good for the French economy. Macron is a shallow, unclear liberal, whose policy left the French economy at its current sluggish rate. Which one of the two sounds more like Donald Trump?