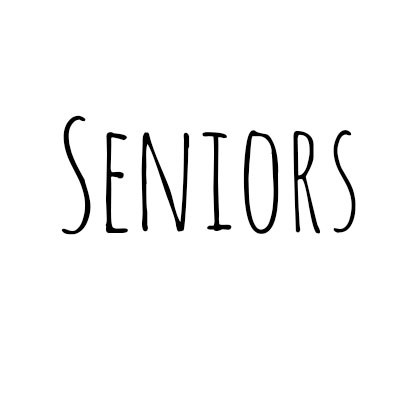 Gavin Richard, vying for the Senior Class President spot, believes he is more than qualified to be your president. With experience in management and a natural tendency to lead, Gavin hopes to be able to serve the incoming senior class as their leader. Gavin promises to center his policies around what the students want and have the students be involved in his leadership. He believes his first-year-leadership-student status can serve to his, and the student body’s, advantage— he has the ability to represent what the students outside of leadership really want. Gavin Richard promises to bring change.

Ashley Chough has wanted to be Senior Class President since her first days in leadership two years ago. Ashley wishes to involve her class more in school events and hopes her extensive experience will help her achieve this goal. She believes her outgoing personality will help her represent the voices of her entire class. She is dedicated to making next year the best senior year Dougherty has ever seen for the class of 2018, as well as making the annual Disneyland trip memorable.

Hoping to be the incoming senior class’s next Vice President, Rebecca Ji has experience in planning events, and believes she is ready to plan more events as your next Senior Vice President. A self-proclaimed people-person, Rebecca has no problem talking to the variety of personalities that make up Dougherty’s student body. Rebecca hopes to bring unity and spirit to Dougherty’s incoming senior class and make its last year as memorable as possible.

When asked why he is qualified to be the incoming Senior Class’ Vice President, Bijan Kazerooni described himself as a “hard worker”, “born leader” and “the best”. He believes in representation for all students, and hopes to make all voices heard. His main goal is to unite the class of 2018 and make senior year “the greatest Dougherty Valley has ever seen.”

Vying for the Senior Class Vice President spot, Hojoon Lee has gained leadership skills this past year in the leadership class that he is hoping to have the opportunity to use. He hopes to make the class of 2018’s senior year “a sweet ending” and wants to create more unity in the class. He wishes to break free of the typical vice president mold and do more than the typical VP. Hojoon wants you to vote for him because he is dedicated and passionate about making the class of 2018’s senior year one to remember.

Running for the Senior Class Secretary Spot, Kristen Ma hopes to bring inclusivity to Dougherty’s incoming senior class. Kristen hopes to make everyone feel included, and make the senior class seem like one united unit. She says, “just say ya to K. Ma.”

Hoping to be the next Senior Class Secretary, Brian Liu believes his likeability and natural tendency towards leadership is the reason he should be elected. He wishes to promote equality, acceptance, inclusivity and positivity across the Dougherty campus and hopes to make students realize that a loving community exists that is willing to help and support them. Brian considers his passion and desire to create an impact the reason that you should vote for him as the Senior Class Secretary for the 2017-2018 school year.