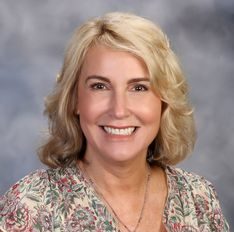 This year, Dougherty welcomed assistant principal Catie Hawkins. As she transitions to a new chapter, she is excited for what is to come.

Hawkins has been an administrator for eight years, previously working at California High school. Prior to being an admin, she was an English teacher and a teacher on special assignment in Arizona.

“I did not have [the phase] where I wanted to be a teacher administrator [until] I was in college [and] it took me ending up having a leadership role… now I’m here and I’m not in the classroom anymore,” Hawkins said.

While making the switch from a teacher to an admin was tough, she likes working with different departments, students and staff.

“At first, it was a difficult change because when you’re … known as a nice teacher or fun teacher, kids come in with great attitudes. [But] when you see an administrator, [the thought is that] you’re in trouble,” Hawkins said.

She stated how there is a stigma when it comes to seeing an administrator in their office. To combat this, she added personal touches to her office to make students feel comfortable and build a personal connection with them.

“98% of what I do has nothing to do with getting kids in trouble. I’d love to hear what kids are excited about. I love to hear about their colleges and their careers, what they’re interested in … I don’t want to look like just a person who’s just like an authoritative figure. I’m here to help [them] with anything [they] need,” Hawkins said.

As she settles in, Hawkins gets accustomed to the difference in cultures and the environment that Dougherty brings. Meeting new teachers and staff while being in a new and bigger environment has been a “fun change” for her.

“There’s a diversity that wasn’t exactly at Cal that [is] here, that I love. And also every school has its own little culture … so it’s been a lot of fun to kind of see what [that] has been [like],” she said.

With the culture difference, she also has heard about the “stereotypical mindset” associated with Dougherty from teachers, parents and students.

“I don’t think it’s a dangerous mindset, for some people [it] might be, who don’t maybe feel like they’re fitting that particular norm,” Hawkins said.

She has seen the academic pressure where every year it appears to get more competitive. She sees that there is so much more to look forward to in the future, rather than having college as the ultimate goal.

“That’s what bothers me. That mindset bothers me … we’re getting into college and then what after that? You’re just like ‘I got in!’ and now I have nothing else to think about. No other goals because it [already] happened,” Hawkins said.

Hawkins believes that strengthening your weaknesses is just as important as enhancing your strengths.

“I believe that life has a way of working itself out … life’s a big novel, it’s just a bunch of short stories that all come together,” Hawkins said.