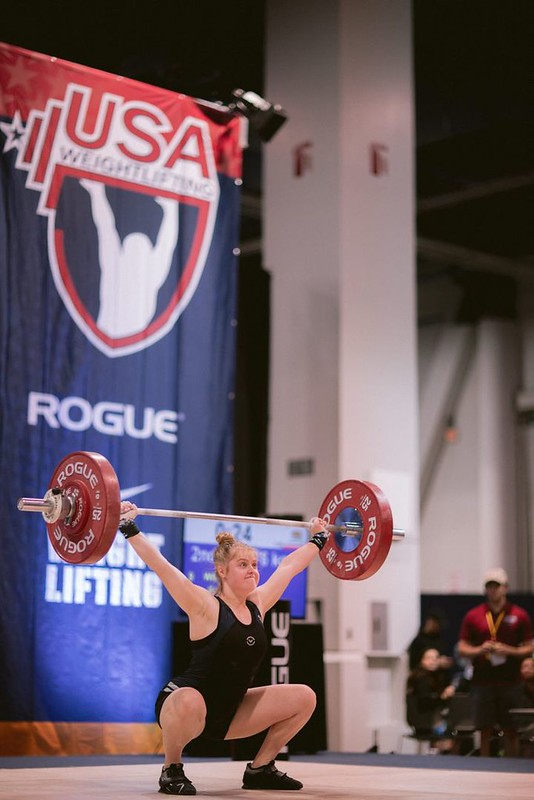 “[My coach] said, ‘Oh, you can qualify for Nationals.’ From there, I just kept going.”

Kimberly Wiese: One or two years ago, I decided I wanted to try to go to the Olympics. I got into weightlifting a couple years before that. Originally, it was just my coach and me. In 2017, when I was roughly in the middle of sixth grade, my dad wanted me to not hurt myself [working out], so I went to a private weightlifting lesson with this coach on a Sunday morning at my gym. And then I just started going to him every Sunday. And then he said, ‘Oh, you can qualify for Nationals.’ From there, I just kept, kept going. I just kept doing it and I love it, and I would never want to stop. I’ve been given a lot of strength—at first I didn’t have a community. But now I have a bunch of other people helping me. I have a nutritionist, therapist, I talk to someone at my church, and also my family. It takes a team. I’ve even been fortunate enough to talk with one of the Olympians that went to the Weightlifting Olympics. It’s been really cool getting to connect to some of the people that are in Team USA.

Also, my relationship with my coach…is one of the most rewarding things [about weightlifting]. He’s like a second dad to me. Now we have our own nonprofit called Fortified Strength, where we teach youth how to weightlift. On Tuesdays, Thursdays and Saturdays, I help coach anyone from six-year-olds to 18-year-olds. We constantly have new people come through the program. Over the years, [the sport] has gotten more popular. At first, lifting will be really uncomfortable, it’ll feel really weird, but you’ve just got to give it some time. It’s definitely not very popular, but it’s a cool, unique sport.

This week is actually my first competition that I’ve gone out of the US to compete for. It’s in Canada, and it’s to try and qualify for the Youth World Championships next year. I won Nationals [in 2019] and I just placed second at Nationals a few months ago. I actually beat one of the Youth World team members in snatch, one of the movements in weightlifting. I kind of made them scared, so that was funny. But the Olympics is the path I’m on currently. Weightlifting might be pulled from the 2028 Olympics in L.A., which was the first one I was hoping to go to. Because the IWF, the International Weightlifting Federation, doesn’t do drug testing well, they’re getting threatened to be pulled out completely from the Olympics. So it’s really sad, but…I still plan to compete for a while. It gets more challenging as I’m trying to go to higher levels and there’s just so much going on, especially balancing school. But it’s really cool because you can actually compete when you’re 80 or 90. You can literally do weightlifting your whole life.