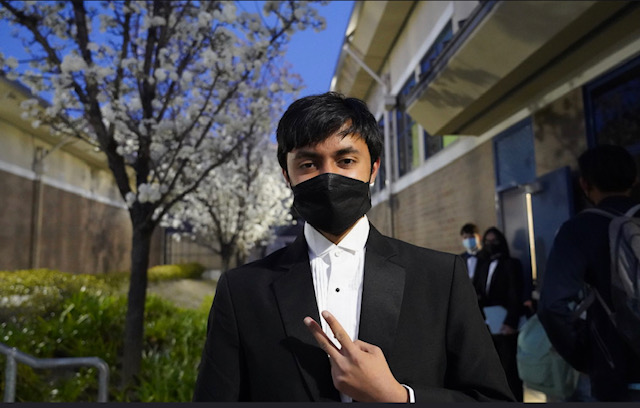 Senior Sanjit Rao has played the flute for eight years since he first started in fourth grade at Hidden Hills. He’s a veteran of the Area Band Festival, having participated in fifth and eighth grade.

As part of Wind Ensemble 1, Rao played “Star Wars,” “Semper Fidelis” and “Entrance of the Gladiators” for the high school portion of the festival. It’s DVHS tradition to open the high school segment of the festival with a piece everyone can recognize, whether it’s “Star Wars” or “Mario Kart.” This year, audience members could stomp along to Darth Vader’s “Imperial March” as Dougherty Valley’s band revived the classic medley from a galaxy far, far away.

“That would get everyone really excited,” Rao said. “That was my personal favorite.”

Although this will be his last year at the band festival, Rao distinctly remembers the awe of being a fifth-grader and participating in the festival for the first time.

“That was basically my first time being at Dougherty and seeing what high school would look like,” he said, reflecting back on days when the festival took place in the Auxiliary Gym. “I remember … just saying, ‘dude, this gym is huge.’”

The band festival also opened his eyes to high school music, allowing him to see what advanced music looked like.

“I would look at the people who also played the flute. And I’d be like, ‘That could be me,’” he said.

Now that he’s a senior, he feels gratified being the one younger kids will look up to — something that has more than a degree of truth to it.

“They all look half my height!” he exclaimed. “But [being the senior] is rewarding and it pushes you to do well because you don’t want to look bad to one of them.”

For the young musicians following in his footsteps, Rao urges them to persevere.

“The hardest part of playing the flute is the beginning. Afterwards, it becomes almost easy; it does get very playful,” he stated. “Otherwise, I would stick through it for [the middle school field trip to] Disney.”

In the meantime, Rao leaves his last Area Band Festival with satisfaction and pride.

“It’s a little bit nostalgic,” he said. “[As a fifth grader], seeing the high schoolers, seeing what music looks like in the future, actually made me really excited about continuing music.”