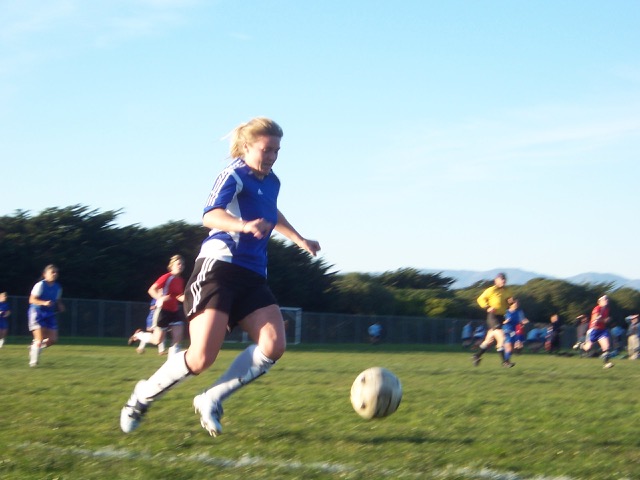 “I don’t think soccer has changed me. It has defined me.”

Mrs. Wilson: I started to play soccer competitively in a club team starting from third grade. In high school as a junior, I tore my ACL and broke my arm in a skiing accident. And so I didn’t play soccer on the varsity team my senior year, and I felt crushed. I thought that playing on the varsity team in my senior year would be a huge leadership experience. And then I had the accident in February, but the tryouts were in July, and I was not able to get back. So it was incredibly deflating. But what happened is that I poured myself into journalism because I was the editor-in-chief of my school newspaper, and I started to play recreationally with some friends of mine. I completely fell in love with playing again and I had so much fun.

So when I went to college, instead of trying out for the college team, I started playing in a competitive club team. It was like a student-run organization. It was so cool that I had stumbled upon it. We played other schools like Ohio State, Penn State and the University of Kentucky. There were many tournaments and we even ended up going to the University of Texas and played in the national tournament down there. It became an incredibly fun way of shaping my identity. When I got out of college I was looking for teaching jobs. I ended up meeting some people in my hometown that played in an adult co-ed recreational league. And that became my new friend group. When I came here to California, I found the local soccer team and ended up meeting more people. Sure enough, I ended up meeting my husband through playing indoor soccer.

I think that US soccer always gets a bad rep for not being that great. But I always followed the US soccer team and especially the women’s US soccer team is always amazing. I really respect the US women’s soccer team and even today, I think what’s so cool about it is that the women have always been some of the best in the world, which is not the case with the men. And so to watch these women that have defined soccer for our country, and seeing them fight for equal rights, for the pay gap, really getting women respected as athletes, was so inspiring. People like Megan Rapinoe and Mia Hamm are so great. I’m very proud to be associated with them.

The feeling of playing a game, and playing that game well, and just knowing that game to the point where it makes you feel alive and free. That’s what I love about soccer to this day. I am an aging athlete. I have a knee that probably needs to be replaced. I have had three knee surgery since my accident in high school. I’m battling arthritis. I have had probably two dozen injuries in my ankle. But there’s something that just draws me to that soccer environment. What is cool is that I get to share my love of this game with like-minded people from various ethnic backgrounds, classes, and careers. We all share that love to just come together and play that game. Soccer has given me the opportunity to meet people. Soccer is almost like our common language. People I know today are some of the most down-to-earth people, who taught me to love the celebrating sense of that beautiful game.

If I got to give advice [to] aspiring athletes, I would tell them to remember why they’re playing. Remember why it’s fun for you and keep on trying to put yourself in situations that allow you to preserve that sense of fun. If it’s not bringing you that sense of joy, something needs to be changed. I think I can still do well and play competitively at this age because I’ve managed to not burn out and not let other people tell me how I should be playing.

It’s hard to remember my life apart from soccer. Soccer is almost like a family member to me. I remember feeling so cool as a little kid wearing my soccer uniform to school. It was part of my pride and confidence in myself. Soccer has always just been kind of like a mentor or guide as to how I should view my life.

I should not be playing. Every doctor in the world has told me I should not be playing anymore. They tell me to pick up swimming or power walking. My body is beaten to the core when it comes to soccer, and my husband’s the same way. But I’m going to keep playing until I can’t play anymore.