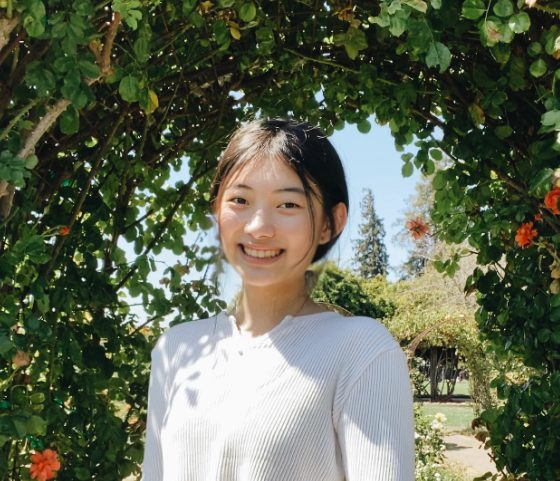 “I personally believe public speaking education should start at a very young age.”

Emily Han: I immigrated from China to California when I was 10, so that was [around] my first year here when I was in 6th grade. When I moved here, I knew about nothing here, and you know I just thought that it would be the same environment that I stayed in before, but it was totally different. I felt like I couldn’t connect with people. Before I moved here, I was a super hyper-confident person because I was a moderator; I went to a lot of statewide or province-wide events, where I would meet a lot of professionals as well…but after moving here, especially, you know, with the language barrier, [I struggled to assimilate] because I just cannot understand [things] what trends were…and all that different middle school things that were popular. [During middle school] I started talking less and less. I wouldn’t like to talk to a person at a random store like I used to…because I felt like they would judge me based on the way I speak, like how I misuse some words, [my] accent, or [whatnot]. [I was no] longer willing to speak the way I used to with the same amount of confidence, and my parents also recognized it, so they signed me up for speech and debate. I obviously couldn’t understand a thing. It…normally it takes people like a year or so to get into speech and debate…and then [by] the second year [or so] they will start competing at tournaments. It took me a full two years…to really understand what Speech and Debate is, and to really understand how to do public forum debate, which is the one that I have been doing for the past four years. Even though I’ve been doing it for four years, which is more than some of my peers who have only done it for one or two years, who are still better than me because I had to go through the super long process of, you know, learning everything from the very basic building blocks and I was alone in the process…I had a really hard time

I wanted to drop out..that’s when I started doing a lot of stuff by myself. I would watch YouTube videos at night. I would stay up [late] in middle school, just to catch up on everything that I felt like I missed out on so that I can be at least at the same level as everybody else. Not necessarily better, but just to be at the same level, I had to put in a lot of effort. And after I sort of succeeded, I regained my confidence in public speaking…[That also came with] not caring that much about other people’s opinions anymore…I feel like I regained my confidence through public speaking through this journey that I’ve been through, and [was able to tie it to] entrepreneurship.

[At the] beginning of the pandemic, about a month before the pandemic started, I had this idea, because, you know, in high school especially, at Dougherty, where there’s a hyper-competitive environment, there’s so much [happening] especially in speech and debate. I feel like it [became] really hard for a completely new kid to Speech and Debate to get started,  even if they’re not international students…I witnessed some of my team members drop out of debate because they thought it was too hard [at the start]. Even though there were supposedly team captains and coaches [to] support you, they still felt that it was so difficult…I wanted to change that… and tackle the lack of public speaking education that exists in public school curriculum because they don’t teach you how to be confident. They don’t teach you how to talk [and] they don’t teach you how to present yourself. They just tell you to do it whether it’s a class presentation or…you have to to figure it out by yourself. I wanted to start my nonprofit, which is called Make a Statement. Basically, the central idea is to help every single student who walks out of our program make their own statement in the future through teaching them with different webinars and workshops on public speaking speech and debate, MUN, mock trial, all those kinds of different public speaking events. Our original plan actually was to focus on youth, so elementary schoolers to early middle schoolers, because I personally believe public speaking education should start at a very young age, just to cultivate that confidence as time goes on.

Obviously, the pandemic hit, so it wasn’t an option to teach at local elementary schools. That was when we shifted towards online learning. We invited guest speakers [such as] the executive marketing director at Poshmark…Mr. Steven Young, and he was able to talk about his own speech and debate journey back when he was in high school and how those experiences and how his public speaking skills were established over time, eventually got him into some very big Ivy League’s, and you know, became a very successful public speaker and business person. We also held a free summer camp and we’re currently planning to hold a free speech and debate tournament for novice competitors who are new to speech and debate; we hope to, you know, instead of making this more of a competition, to rather make it an experience to have the judges not only judge the round, but guide the competitors through how [the process and help them grow]…That’s basically how I was inspired to first start on my entrepreneurship journey with my nonprofit. [It’s been a year since Make a Statement launched] and then I realized that I had a passion for recognizing problems that others may not recognize or others may not solve, to come up with my unique solution to solve it. I applied to a few summer camps that focus on entrepreneur[ship] and the one that I got into is the MIT LaunchX program for the upcoming summer, which I’m super excited to be a part of.

One thing that I want to tell younger Emily…is to not be so scared to take the first step. [For example] especially in seventh grade when I transferred from a private school to Gale Ranch, I was exposed to a lot of new opportunities, and they were literally delivered to me, but I rejected them because I was so scared to take that first step…keep in mind to always be prepared when opportunities show up…When you have the chance to because you don’t want to leave with any regrets and at the end of the day, you really have nothing to lose. Sure, you might embarrass yourself in front of a few strangers. But, that’s not important compared to experiencing the knowledge that you’re able to gain from those opportunities.