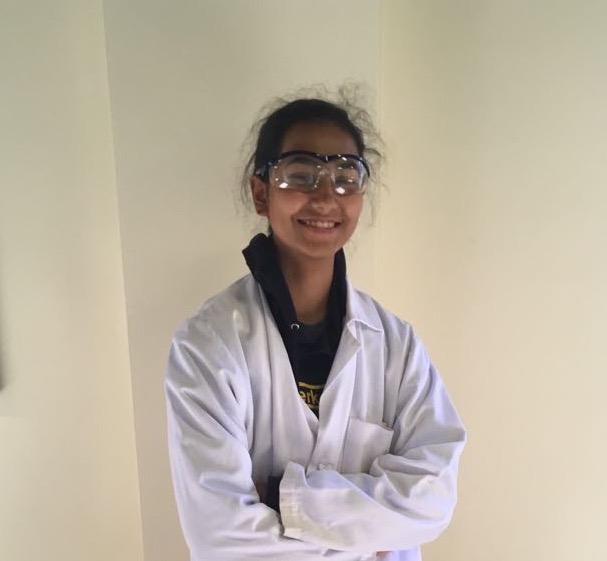 Risha Chakraborty: “I call myself a bio nerd.  It’s something that has been almost the unilateral focus of my life for about the past four years, and it’s going to be for the rest of my life. I found something that I really like. I love it, and I’m going to do it. Science is one of those things where it’s, you know you have all this natural curiosity and it’s where you direct it. You want to understand how things work, you want to understand why the things around you are the way they are, and you want to understand why the people around you are the way they are. It’s like all those interactions and all those natural phenomena, they’re explained by science to some degree or another. You chip away all those bedrocks of artificiality and superficiality, and then at the bottom of it, what you’re left with is science. Of course, any scientist will then take that further and be like you can chip away at science and you’re gonna be left with math but like, I’m just gonna leave it there. Science has been a way for me to direct my own curiosity. It’s a new perspective with which to look with which to view the world. Especially in today’s world where there are so many weird things going on [such as injustices] and you’re just like, “how can this be allowed?” At least you know that some things are gonna stay the same, two plus two is always equal to four, the sun is always the center of the solar system, and cells are always going to divide. So it’s simple and explains so much, it’s unvaryingly true…

Some hundred years ago, evolution wasn’t taught in schools. It wasn’t actually believed to be a thing, even though Darwin showed it was. And now, there are still people who believe it and in fact, America is one of those countries where there’s a majority of people who don’t think evolution is a thing, but it’s still taught in the majority of schools, and that’s like the state institution, right?… You can see laws and theories, you can see people, you can see the effects of a disease, you can see an apple drop down from a tree. But is it really foreign pathogens that are causing disease, is it gravity that is causing an apple to fall down, or is it God? We don’t know. Science is a method. It’s an explanation. But it’s ultimately proven by facts that not everyone has access to. I think that the more we get better with science education, which is something I’m really passionate about,…the less [that] partisan [politics will remain] an issue [in science]. Just like [how] evolution is taught at schools now, some of those other things that are seemingly obvious to us like [the coronavirus pandemic], that are so not obvious to everyone else [will become obvious]. I have hope for that at least.

Beyond myself being a scientist, it’s that I’m a woman scientist… my gender has been not a point of contention but definitely at the forefront of every single scientific endeavor that I’ve ever embarked on. It’s something I’m always thinking of. And it’s not a place of fear [nor a] place of intimidation. I’ve never thought of myself as lesser than just because I’d be in the minority. I do know that I’m going to be in the minority and I’m very very cognizant of the fact that my job as a scientist who’s trying to make an impact on the scientific community leaves some papers that are going to be read for years to come; that’s going to be made a lot harder just because I’m a woman, and I know that. But despite knowing that I am so willing to just take that challenge because it’s so worth it. The process of practicing, doing research, or reading science, being an academic or, or a doctor in the future, that’s also much worth the struggle that’s going to come along the way. I know that a lot of women are intimidated, they’re scared. As far as my social passions go [such as] improving the community around me, the majority of that has been towards making science particularly more equitable for females, but really just anyone who’s feeling intimidated by the fact that they’d be a minority. [For instance, there’s an LGBT minority, there’s a racial minority in science, and it’s not just DVHS. It’s whatever science communities I’ve become part of, such as the science bowl community or the research community, there are so many minorities here…there’s not that many Indian Americans in the American scientific community right now anyway, so being a minority is inevitable for me, might as well accept it and do something to change the status quo, right?

As far as I’ve done research, I’ve been young… [I’m a high schooler] and most research is done by undergraduates, graduate students, postdocs, professors. I’ve talked to Jim Allison who won the Nobel Prize in Medicine in 2018…They don’t care about this kind of thing. The idea is that the better scientist you become, you realize you need all the ideas you can get. You need insight from all these different angles and you’re only going to get that if you maximize your resources… In 9th grade, 10th grade and some of 11th grade science bowl have been one of those places where I’ve faced obstacle after obstacle, just because of my gender…It’s obviously a competitive field, Science Bowl it’s a competitive event, and competition makes people do things say things or become blind to things that maybe otherwise they wouldn’t. So, in the face of competition, it’s not really in the whole definition of who you are. But there have been instances where there are guys, this was especially just relevant in ninth grade because I wasn’t in charge of then, I was just, you know, a little girl and coming in, [saying] “I want to be a part of the team, please.” There was discrimination as far as team selection was going, it wasn’t objective, [it was] the reason that I almost didn’t make the team. In fact, the night before, I have kicked off the team and then put back on the team. The reason for that was because they just wanted an all-boy team. I made the team and as I was made an officer, a captain for the past two years, It’s been my sole job to make sure that the process is as fair as possible. You do that through objectivity. No matter how objective you try to be or how transparent you try to be, there’s still going to be…opportunities for there to be discrimination, for there to be bias. Knowing what it’s like to be on the other end of that, I’ve done my hardest to recognize those moments, stop them, as they’re coming from other officers [for example], and also to uplift people… I was the first [girl] in a really really long time…definitely the first captain. We don’t see women in like stem competitions, especially because there is a lot of discrimination…So there’s really just an idea that you kind of blind to the things you say if you haven’t experienced that being in the minority or being discriminated against, and you can fault people for it but you can teach them about it.

As a scientist, you’re not working in a void, everything that you’re doing is ultimately, to some extent, or another, to progress [forward], whether that is to gain more knowledge or to develop new technology that’s ultimately going to better lives, or to make new medicines that are going to extend lives, or just for the purpose of human progress. And I think a lot of that, the passion that comes for it, or the, I guess the reason for loving this field so much, comes just from life experiences; you gotta have lived to do it. To myself, the only thing I would say is just to keep doing what you were doing because. Just keep living. You can’t ever stop. That’s all I would say, and there’s definitely moments where, you know, these instances did happen where I was like discriminated against or something and I was super sad that night, and maybe a guardian angel me from the future would be like “there, there, you’re going to do it eventually because you are you, it’s an inevitability.” So, just realize what you’re working for, just keep living, just keep doing it. You’re gonna make it.”