Newtro, a rising trend, has made a clear dividing line 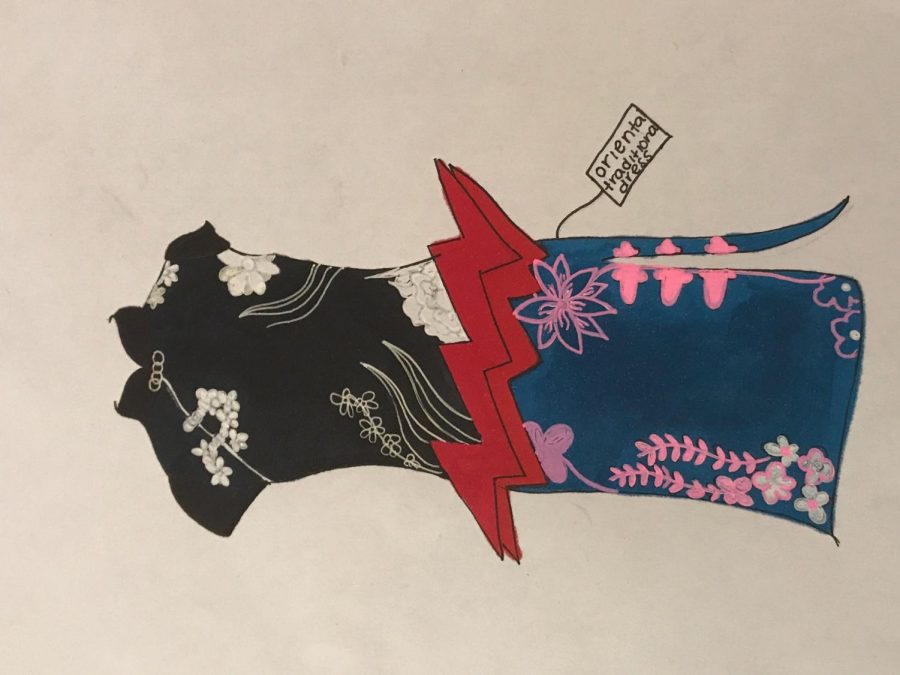 Many cultural attire, like the Qipao, has been twisted and changed by the Newtro trend in South Korea

Newtro is a rising trend that has been widely popular in South Korea these past few months. As Koreans explore retro clothing, shops, and food, they experience their own history that has happened in the ‘90s, ‘80s, ‘70s, and even the ‘60s. Now, people and many brands have started to modernize historical attire. But, they have stepped upon the idea of Newtro and have created their own cultural clothing that has received backlash and hate.

Through Newtro, people in Korea have experienced a way to see their history and their cultural heritage. As the historical TV shows popularized in Korea, many have started to wear clothes that were portrayed in the shows. Cafes and shops are changing to look more like the traditional Korean house, han-ok, and many continue to get in on the act. While some may wear the hanbok, some would be wearing bell bottoms, and others would be wearing elegant dresses and suits. Each person represents their own era of time. And as trends similar to Newtro continue, culture will change.

Cultural modernization and changes are associated as obstructive due to misrepresentation. And as this phenomenon of Newtro is not only popular among young people, but with many fashion brands. Wearing cultural attire with a contemporary twist and misrepresentation is now becoming more and more common.

Many fashion brands have shown their desire and desperation to be part of Newtro. In Topshop, what has once been a traditional Chinese dress, Qipao, has been changed into a casual shirt. What was once a typical blue bodysuit with flowers is now selling in Zara as an oriental print bodysuit. They continue to carry on with their “authentic” cultural attire with a modern twist.

These modern brands have claimed their clothing to be original.

“Once you get onto a billion dollar company, you have to be on some level where if this doesn’t sell, then I’m not going to be in business anymore. This needs to be on a consumer base,” Samuel Minioza explains.

Whether it is intentional or unintentional, these fast fashion brands have created clothing that is inappropriate and offensive. But they have also created clothing that is appealing to society, to the people. The new “authentic” clothes are made to be more accessible and less radical. Since trends go by so rapidly, it becomes harder for brands and people to know the culture. And as they continue to make clothes at fast rates, it becomes inevitable for brands and consumers to not truly appreciate one’s culture.

“You have to research and learn more about the culture before you wear their clothes,” Abby Kapur, a freshman in DVHS says. “I don’t speak for all of those groups, but if the clothing is important to them and says they are offended, then I think it’s not too sensitive.”

These brands have adopted a culture for the sake of an ongoing trend, for the sake of personal gain. And they have created clothes that focus more on what is going to sell rather than what is appropriate.

Distinguishing who is able to change what, to wear what and to sell what has created a definite borderline and division in which there are limits to who can be part of a particular group. As trends like Newtro become more relevant in media and modern day society, we become more aware of the differences between right and wrong, the differences between appropriation and appreciation. And whether we have been too sensitive or not, the acts of cultural appropriation or insensitivity has created guidelines showing what is acceptable and what is not.

“By putting these harsh lines of who can access what, I think it’s very divisive,” Minioza states.

There are restrictions to how much we are able to modernize. And through these rules, division becomes evident. As cultural appropriation perpetuates, it is unavoidable for us to face more limits, more guidelines, and greater separation. Newtro, a trend that was made to embrace one’s culture, to have fun modernizing history, and appreciating it has now become a clear dividing line between those who will maintain their history, their authenticity and those who are ready to accept others being part of their culture.