The Wildcat Tribune • May 28, 2020 • https://thewildcattribune.com/9291/opinion/climate-change-what-we-need-is-shame/

Climate change: what we need is shame 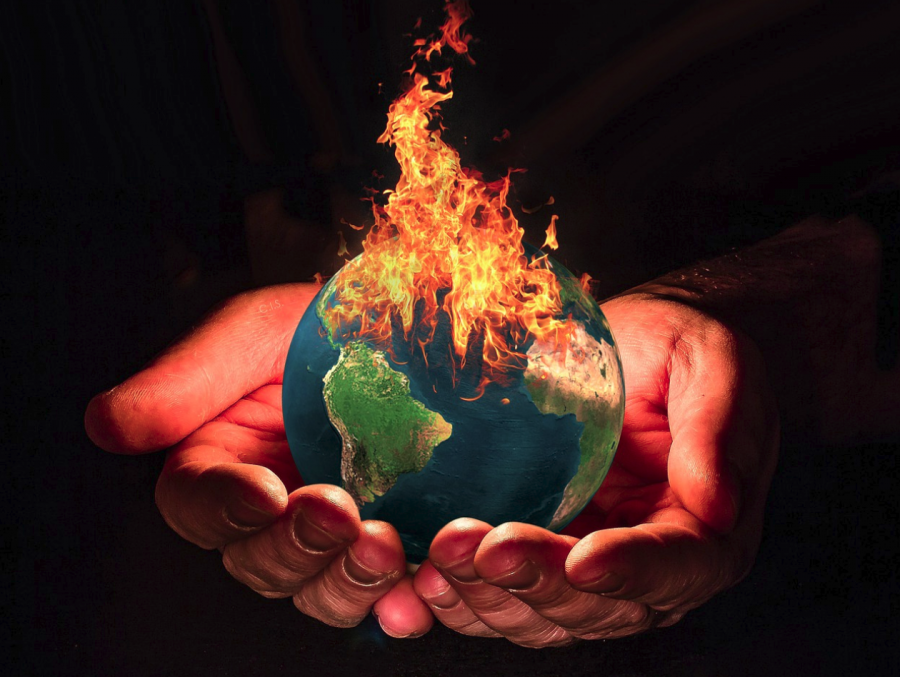 Humans are the first creatures to have instigated a mass extinction. Perhaps we'll be the first to reverse one, too.

I used to drink giant bottles of water— the 32 ounce plastic ones you can buy at certain Costcos. As a disproportionately hydrated person, I would lug them to school every day. That was one giant plastic bottle every single day, supplemented by a smaller, standard 16 ounce plastic bottle in case I ran out. Sometimes, I even drank from those at home to spare myself the inconvenience of filling up my reusable.

Then one day, I was talking to someone about the ever-prevalent issue of climate change. As I stood there, lamenting the destruction of the planet, I suddenly became very aware of the 32 ounce plastic bottle in my hands.

The hypocrisy and shame of it made me rethink what should have been obvious. Yes, I took five minute showers (three, if I were motivated) and recycled diligently, but that wasn’t enough. That wasn’t commitment. That was a half-hearted excuse, which I used to cling onto my luxuriously wasteful lifestyle.

Not caring for the environment is a shameful thing. I don’t care whether you’re a nature-loving tree-hugger or a fuel-sucking loafer who can’t be bothered. That’s not all it’s about (although yes, the world is so extraordinarily beautiful and brilliant that it IS what it’s about). This is about humans, and the planet that sustains us, and life. There is not a single ounce of you—  your body, your house, the objects inside it, your entire lifestyle— that was not given to you by the earth. I could write on and on, spouting lyricism about how the earth is our first and true mother, the mother of humanity, the one who provides for us without asking for anything in return, and who is wasting away under our child-like impertinence. But there are more important things to say.

If you think life is important, you should be taking action against climate change. If you are remotely a good person, you should be trying to change your ways. If you don’t care, at least pretend. The earth begs you to.

It is sad and eerily telling that I needed to return and edit this article to include the necessary evidence: climate change is real. The Anthropocene is not just a fancy name; it’s a warning of an era dominated and changed by anthrop: humans. A sixth mass extinction is predicted to occur— no, it’s already underway. According to a study published in the Proceedings of the National Academy of Sciences, in which 27,600 terrestrial vertebrate species were studied, billions of animal populations are disappearing due to human overpopulation and overconsumption.

Professor Gerardo Ceballos, leader of the study, described it as a  “biological annihilation,” caused by— and take a deep breath— “habitat conversion, climate disruption, overexploitation, toxification, species invasions, disease, and (potentially) large-scale nuclear war—all tied to one another in complex patterns and usually reinforcing each other’s impacts,” and the “ultimate drivers… namely, human overpopulation [and] overconsumption, especially by the rich.”

“The situation has become so bad it would not be ethical not to use strong language,” said Ceballos, in a Guardian article. “The window for effective action is very short, probably two or three decades at most.”

If hypocrisy and shame were the anchors of my transformation, then there is a culture we should be breeding, a status quo that is now necessary: stigma. What I mean is: a sort of societal exclusion surrounding climate change skeptics and non-advocates.

Let’s imagine a different world. This is a world where everyone bikes, walks, or drives eco-friendly cars to work and school; everyone shops for sustainable clothing; everyone takes five minute showers, consciously thinks about their food choices, uses Tupperware instead of plastic wrap. Earth Day is a holiday as widely-beloved as Thanksgiving. Limiting our carbon footprint becomes a priority. Smoke-spitting factories and deforestation are looked down upon and banished in favor of renewable energy sources.

How willing would you be to throw a plastic bottle onto the highway in this world?

Peer pressure and social norms have always functioned as boundaries in human society. Perhaps, if harnessed correctly, they could transform it.

In a way, this is the stigma which curtailed smoking in America. In 1965, 42% of Americans smoked cigarettes— half the population, a seemingly insurmountable statistic. Then, almost discreetly, we marked the act of smoking. Banned in public areas elsewhere, smokers would have to go out of their way to a designated smoking area, isolated, inconvenienced, and stigmatized as doing something harmful. Now, 55 years later, only 14% of Americans smoke.

We need to isolate, inconvenience, and stigmatize everyone, ourselves included, for environmentally destructive behavior.

From this, however, another issue arises. How can low-income citizens invest in solar panels and sustainable products (etc., etc.) when they are undeniably expensive options? How do I expect someone to worry about saving the earth, when they’re busy protecting their family from endless other evils?

I don’t want to see anyone stigmatized for problems they can’t control. I’ve always believed that a good person is one who tries. Trying is the point here, the anchor that ties us to the cause. The little steps which seem like nothing are also something.

Our window of action is short, but for countless species, it’s a window of survival. For harp seal pups in the Arctic, 10 days is all they get to gain 40kg and learn how to swim before the sea ice melts. Due to climate change, early sea ice breakups are becoming dangerously frequent; in 2017, the entire colony’s pups drowned overnight.

If you need motivation, there it is.

But as a global crisis, climate change extends far beyond individual action. Countering climate change will only work if every level of humanity, from the individual to the family, from larger corporations to the government, come together in a collective battle effort. Investment in renewable energy is one such option for the government, which would simultaneously boost the economy and combat climate change— an especially appealing proposal as governments scramble to recover from the COVID-19 pandemic.

I want you to feel shame.

And then I want you to do something about it, so that you no longer feel shame.

Please, be a good person and try.