The Wildcat Tribune • May 3, 2020 • https://thewildcattribune.com/9012/issue-8-covid-19/covid-19-devastates-music-industry-as-performances-get-canceled/ 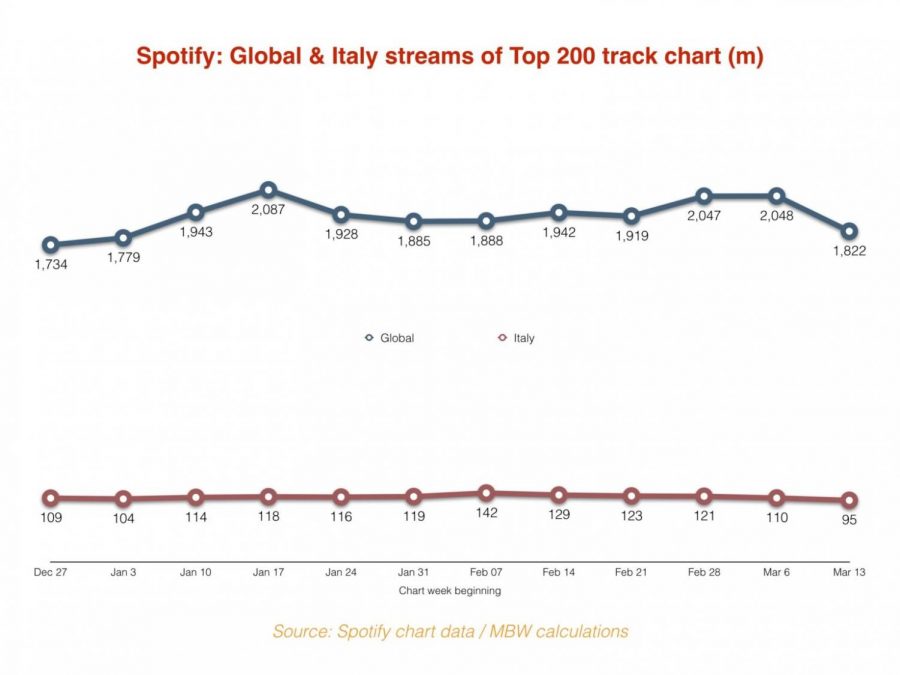 People in the global music industry are experiencing extreme financial loss due to the COVID-19 pandemic. Concerts are being cancelled more frequently due to stay-at-home orders and the general fear of going outside, leading to shortages of income for musicians and their livelihoods.

Classical violinist Miriam Davis spoke to Classical FM, stating, “A few minutes ago I [would have] had tonight’s performance of Mendelssohn’s Violin Concerto, for which I spent four months preparing, canceled with just four hours’ notice.”

The impact of COVID-19 left many freelance musicians and artists in tough financial situations. Not receiving pay to cover daily necessities was not the only problem: long hours of practicing and hard work have been eradicated due to sudden cancelations of concerts.

“Due to COVID-19, one music competition held in Silicon Valley got postponed to August and another one in Berkeley got cancelled. I didn’t spend too much time preparing for them; on average I spent 1-2 hours practicing everyday. However, I was disappointed that COVID-19 threw out the time and effort I did put into my practicing,” said Jennifer Son, a violinist of the Dougherty Valley High School Chamber Orchestra.

Not only were classical musicians impacted by the global pandemic, but the pop music industry also faced major consequences. At the start of February, Rolling Stone reported on concerts across Asia being canceled as fears around the COVID-19 outbreak started. These concerts were scheduled several months before the performing dates, as it was a chance for millions of fans to meet their dream artists and experience once-in-a-lifetime events.

The article wrote, “several major K-pop acts have decided to cancel shows, including Taeyeon, Winner and NCT, who had upcoming gigs in Singapore and Macao, while GOT7 postponed shows in Singapore and Bangkok, Thailand.”

Music industries have had no choice but to either postpone or call off these concerts. As the health and safety of performers, stage crew workers and audience members are the highest priority, this is the most optimal choice that has been made.

BTS’s management states, “We have decided to fully cooperate with the government’s policy to refrain from holding events with a massive number of participants in order to prevent the spread of coronavirus.”

Despite the negative consequences of COVID-19, several musicians have found solutions to keep them financially stable while keeping fans connected with their music. According to Forbes, musicians of all genres have been trying to find sustainable solutions, such as hosting online concerts.

“Coronavirus has opened up an opportunity for musicians to craft a new way of performing, by using technology to support themselves and share their work with fans using alternative mediums, while reaching a much wider audience in one session, allowing more frequent gig-goers to ‘attend’ with logistics,” emphasized Toby Heelis, Chief Executive of software company Eventopedia. “We are seeing an increasing number of artists get involved with online concerts, and there’s clearly a lucrative revenue stream for future opportunities.”

Large music groups, artists, bands and orchestras are increasingly finding new, sufficient ways to recover what they have lost.

Additionally, student musicians who had important concerts cancelled last minute have found ways to salvage their loss and maintain shape through their musical skills. Matthew Okamoto, one of the pianists in the DVHS Jazz Band, stated that he has been “staying consistent with practicing his piano and is getting a head start for next year’s competitions.”

Other students are on board with the idea of getting a head start with future events, especially with more spare time to practice. Arnav Kethana, a clarinetist in the DVHS Wind Ensemble, discussed how he was keeping up and improving his musical skills during quarantine.

“The future is uncertain since there are various timetables brought out by many sources, but we must still stay grounded and practice for future success,” Kethana said.