The Wildcat Tribune • May 3, 2020 • https://thewildcattribune.com/8963/issue-8-covid-19/breaking-down-the-biggest-economic-stimulus-package-in-us-history/

Breaking down the biggest economic stimulus package in US history 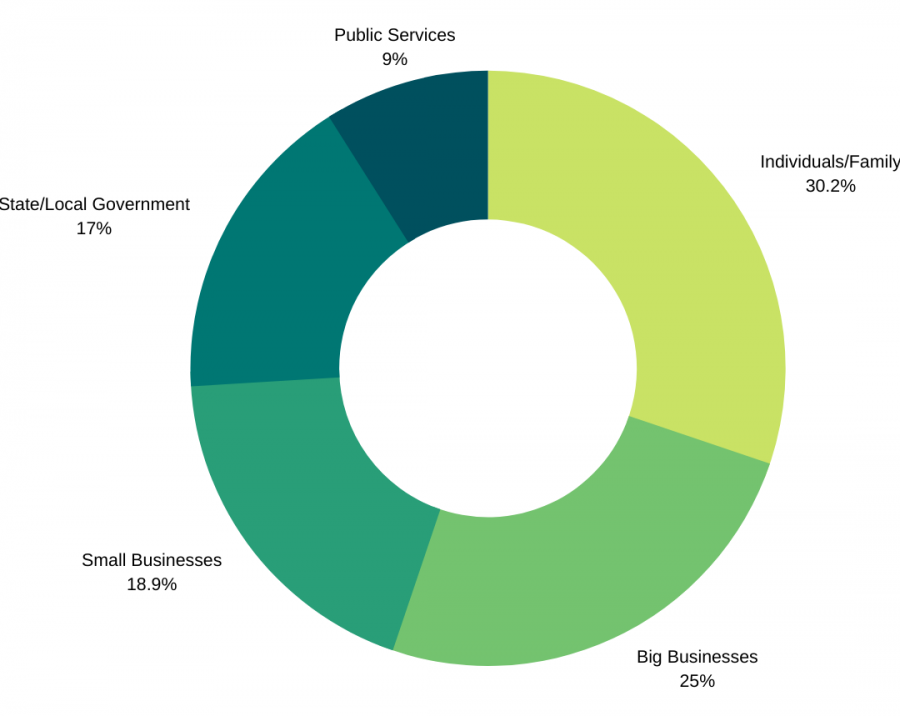 The $2 trillion stimulus package is the largest of its kind, allocating funds for business bailouts, governments and low-income families.

On March 25, American lawmakers passed a $2 trillion stimulus package allocating bailouts to businesses, funds for state and local governments, and direct payments to low income families among other programs with hopes of boosting the economy amidst the COVID-19 pandemic. This marks the biggest emergency spending plan in American history — billions more than the usual annual budget.

The deal follows two other economic boosts passed earlier this year, including an $8.3 billion investment in health care and a more-than-$100 billion plan to increase paid leave and make COVID-19 testing more accessible. As the stock market continues to worsen and layoffs increase as more and more cities enforce a quarantine, U.S. Treasury Secretary Steven Mnuchin told CNBC on March 25 that this stimulus package aims to support the U.S. economy for the next three months.

Split into five categories, the plan diverts money to individuals and families, big businesses, small businesses, state and local governments, and public services, from greatest to least in funds. Toward individuals and families, the bill allocates a total of $603.7 billion, including $300 billion in cash payments, $260 billion for unemployment benefits, and $43 billion covering student loans and other finances.

In cash payments, millions of Americans who earn up to $75,000 individually have received $1,200 in direct payments and an additional $500 per child. Cash benefits slowly phase out as income rises, reaching zero at $99,000 for individuals and $198,000 for couples with no children.

Last, toward student loans, over the next six months, students with federally backed loans can delay payments with no interest penalty.

In addition to individual payments, the package also invests $500 billion in businesses, with $425 billion for the Federal Reserve to use as loans for broad groups of damaged companies and $75 billion for industries hit the hardest, such as the airline sector.

To ensure accountability and transparency, a five-person panel appointed by Congress (at the insistence of Democrat lawmakers) will provide oversight over loans. The plan also requires businesses receiving aid to stop stock buybacks for up to a year after receiving government assistance. And, as an added measure, the plan also prevents businesses owned by senior government officials (including the Trump family businesses) from receiving loans under the bill.

In addition to aid to large businesses, the plan also spends $377 billion on small businesses, with the largest chunk of $350 billion going towards lending programs. With unemployment at the highest rate in American history, lawmakers hope these loans will decrease layoffs.

However, some individuals have pointed out that providing money to banks before small businesses slows down effective recovery. Hayward City Councilor Sara Lamnin challenges the effectiveness of this policy, arguing that the criteria are too strict at this time.

“Waiting periods, having x amount of money and collateral, among other requirements, would usually make sense, but doesn’t right now,” she explains. “These policies don’t work when businesses go from having 100 customers to two practically overnight.”

“The ability to read the regulations, understand [them], argue with bank figures — all while making sure you have steady income — is incredibly difficult, especially for sole proprietorships,” she said.

On the other hand, the Trump administration argued in a press conference on April 7 that banks must help the economy maintain accountability.

The next area of spending is local and state governments, many of which are experiencing strained budgets.

Lamin reported that Hayward has already received increased aid from both the federal and state governments. However, she notes that significant portions of the aid are restricted for cities with populations greater than 500,000.

“Hayward is only around 160,000, and we are one of the largest cities in the Bay Area. That is just way too high a threshold,” she said.

Lamnin furthers that prioritizing large cities does not actually reach the most people.

“Most people don’t live in metropolises. Certainly there are large populations, so it is one way to allocate funds,” she explained. “But it is also the case that not a lot of people live in those places as well.”

The federal administration has defended its decision, pointing to size as a key factor in prioritizing different areas.

“[The] states where there’s large populations — because of the enormous work that they’re doing to prevent expansion and spread of the virus — it’s allowing resources to go to these states and communities that need more support,” Vice President Mike Pence stated in the April 7 press conference.

The last section of the bill, totaling $179.5 billion, addresses public services, with an estimated $100 billion being expected to go to hospitals fighting the pandemic. $20 billion will cover veteran healthcare, $16 billion is dedicated to buy much-needed healthcare equipment, including PPE, and $11 billion will help reduce costs of vaccine and treatment development. According to a Baker Donelson report by Jeffrey Davis and Sheila Burke, another notable $4.3 billion goes to the Center for Disease Control and Prevention to help states implement prevention and mitigation measures, including testing.

As the stimulus bill begins impacting communities, Congress is looking at what comes next. President Trump and Congress are formulating a possible second economic stimulus package, which could include more individual payments, infrastructure spending and expanded voting options.

So far, the White House is optimistic about the current bill’s impact on the economy. During a press conference on April 8, President Trump expressed his gratitude for the bipartisan cooperation in Congress that facilitated the current relief bill and a possible second one.

“[The bill has] turned out to be more successful and more productive than anybody would have thought; Democrats [and] Republicans are coming together to get that job done. That’s a very important job,” he said.