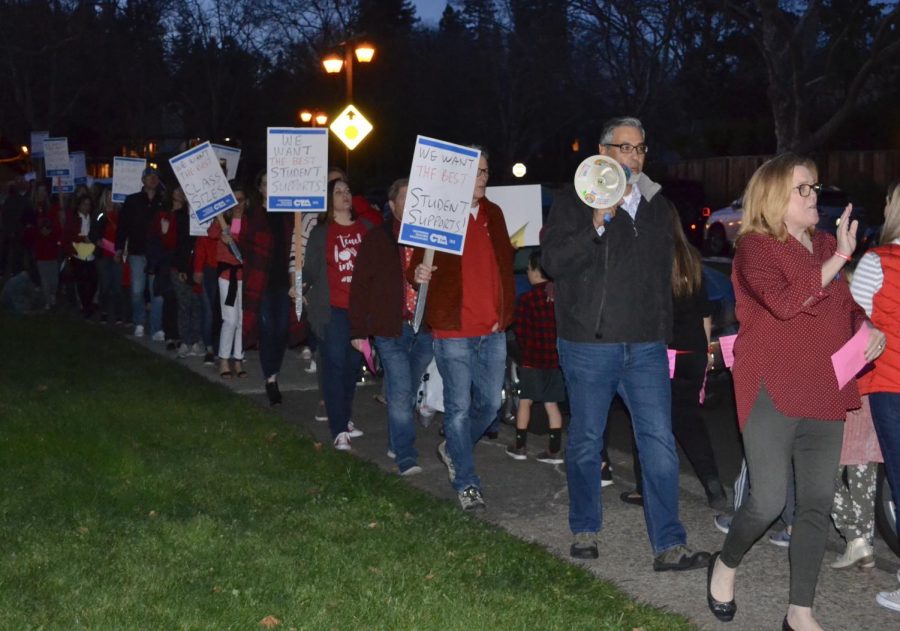 SRVEA members rally on March 3 outside the SRVUSD office preceding a Board of Education meeting.

On March 10, at 5:30 a.m., the San Ramon Valley Education Association (SRVEA) and San Ramon Valley Unified School District (SRVUSD) announced “a comprehensive tentative agreement that resolves all items in their contract negotiations” that would be in place from July 1, 2019 through June 30, 2022.

The agreement came after negotiating for more than 20 hours and undergoing the fact-finding process, which had begun at 8:30 a.m. on March 9 and concluded with signed agreements yesterday morning.

In a joint statement released on March 11 from SRVEA and SRVUSD, it was emphasized that “this tentative agreement, once ratified by SRVEA membership and the SRVUSD Board of Education, will bring closure to 2019-2020 school year negotiations between the parties.”

Some of the highlights of the agreement include a 0.06% increase to the SRVEA Retired Employee Health Benefits Plan and Trust, new language providing expanded rights for temporary employees and a cap on cash-in-lieu payments to employees who waive medical benefits.

This fact finding process was the final step before a strike would have begun. According to USLegal, “Fact-finding refers to a process by which the facts relevant to a dispute are determined … a process whereby a neutral third party investigates a matter to determine the disputed fact.”

From the other perspective, the District had wished to save more of its funds in reserves, rather than spending on short-term measures.

“We are always hoping to settle,” SRVUSD Director of Instructional Services and Communications Chris George said. “We have great teachers, and we know it … We want to give them the best contract that we can responsibly give them.”

Although some conceptual agreements were made last week, SRVEA Lead Negotiator Laura Finco told the Wildcat Tribune that “it took the arduous task of the fact finding process to get management to actually negotiate with the educators.” In a union statement released on March 11, the union emphasized that it “has always stated we would do everything possible to avoid a strike as long as our students were the focus.”

The press release also described that the majority of the session focused on “working out details on class size and determining continued funding.” Other accomplishments secured include more school psychologists and ensuring TK-5 SDC (special day class) students have adequate resources available to them.

Additionally, in order to secure funding for the advancements made this year and the past year, SRVEA also emphasized that “we are going to need to work to pass Schools and Communities First [Funding Act] in the fall,” which, if passed on the November 2020 ballot, would “reclaim over $12 billion per year for K-12 schools … close commercial property tax loopholes … [and] ensure strict accountability so that money goes directly to … students and communities.”

SRVEA is set to present the tentative agreement to all members for a ratification vote, followed by the Board of Education ratifying the agreement at the upcoming April 14 meeting.

“We know that when we work together, management and educators, we can do great things for our students. But when the concern about ‘loss of power’ or only working within the confines of what Ed Code provides is the focus, our students lose,” Finco said.