Green Day’s “Father of All…” disappoints with overbearing pop influences 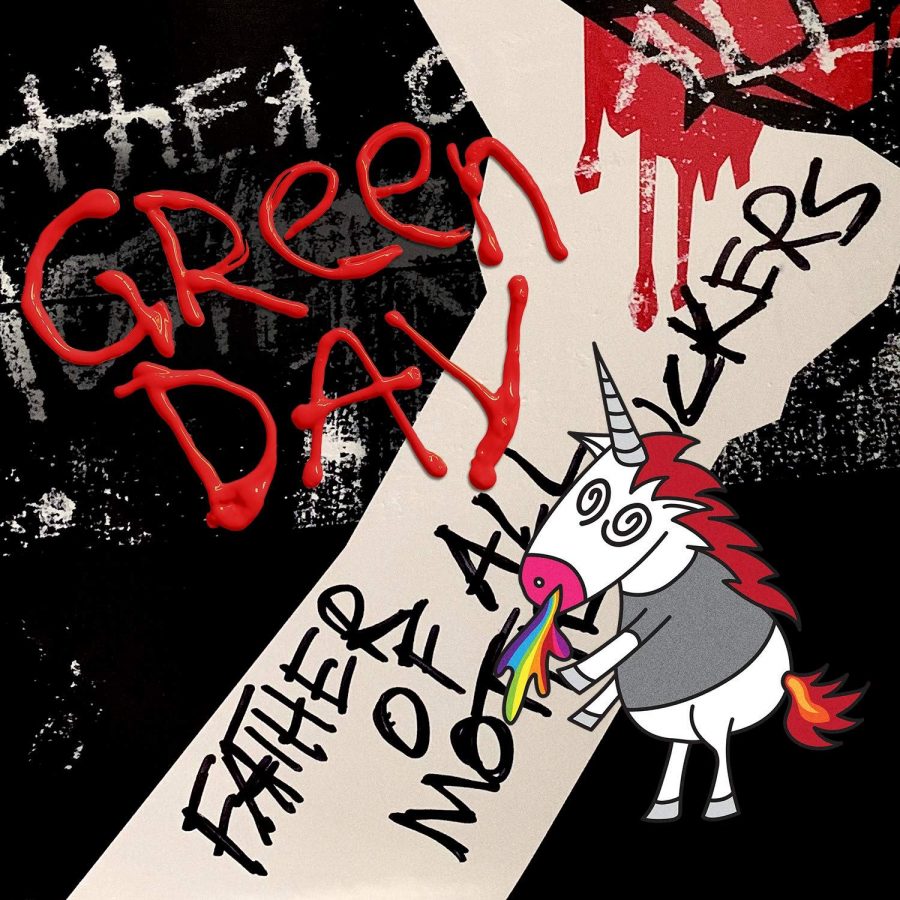 Green Day’s 13th album “Father of All...” incorporates a large amount of pop influence, marking a sharp and unpopular change from their usual rock sound.

Green Day released its 13th studio album, “Father of All…” on Feb. 7, marking a sharp and unpopular turn into the world of pop.

The Berkeley natives have been making music since the early 1990s. Their sound, classified as “punk rock,” has always retained the quality of their instruments above all else. Heavy drums and creative guitar riffs have been the three-member band’s go-to since their first album release in 1991. The release of “Father of All…” drastically deviates from the sound that Green Day fans have grown to love and incorporates an amount of pop influence the band has never utilized before.

The cover features a unicorn vomiting, and is similar to their most popular album, “American Idiot,” except the cover appears vandalized. Sonically, the songs mark a huge change from their previous music, with less prominent instruments. The album is also their shortest album yet, clocking in at only 26 minutes long, a full four minutes shorter than their debut album “39/Smooth.”

The three singles they released prior to the album received mixed to negative reviews. People overwhelmingly disliked “Oh Yeah!,” the latest single, which features an overly repetitive chanting chorus sung over a melody painfully similar to Joan Jett’s “Do You Wanna Touch Me (Oh Yeah),” which was released about 30 years ago.

The other two singles, “Father of All…” and “Fire, Ready, Aim,” served muffled instrumentals characteristic of typical modern alternative songs but quite uncharacteristic for Green Day, whose primary musical influence was The Ramones. The indistinguishable instruments highlight lead singer Billie Joe Armstrong’s voice more than on prior albums. However, the lyrical quality of the tracks is not on par with the band’s history.

“Oh Yeah!” is an example of forgettable and meaningless lyrics, as it simply repeats the same two words over and over throughout the chorus, along with “Stab You in the Heart” which simply talks about hatred towards another person, saying “I wanna see you dead/With a switchblade edge to the chest.”

Similarly, “I Was A Teenage Teenager” explains what life is like being a teenager, trying to draw parallels to their pre-fame 1990s lyrical themes. The extremely repetitive and dull song could have had merit, had it not been written by men in their 40s.

While the majority of the songs sound like pop music, there are a few hidden sonical gems. “Sugar Youth” is the most reminiscent of their old music, although with a more modern twist. Similar to the rest of the album, instruments are buried, but the track does display unique guitar riffs and heavy drums that are characteristic of Green Day.

Though the album as a whole was a disappointment to fans, many speculate that the band is simply having fun with it given that this is their last release with Reprise Records. The album’s new sound is also enjoyed more by some fans than previous albums, proving that the heavy pop influence could be enjoyable.

Nonetheless, the album deviates quite heavily from what is known to be Green Day, especially with songs like “Oh Yeah!” and “Stab You in the Heart” which are heavily muffled with effects and lyrically dull. Despite these shortcomings, one should still give the album a listen to develop a personal opinion on it, as the new pop sound may appeal to some people.