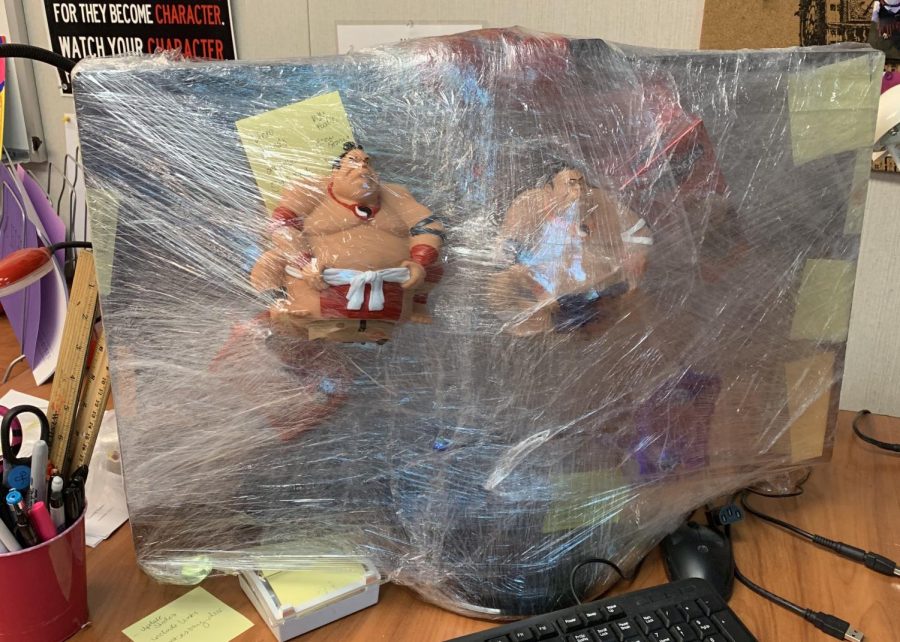 In spite of the tension beginning to peak on campus as finals week approaches, a touch of lightness and fun still springs forth from an unlikely source in the 1000s building — the teacher prank war. With fresh new players (victims) added to the fray, the tradition continues this year, featuring the execution of novel, original pranks.

AP Literature and Science Fiction & Fantasy teacher Mr. Justin Worley was among those targeted. Worley landed himself on the radars of several disgruntled teachers after organizing an eating contest amongst his Science Fiction classes outside the 1000 building, leading to “retribution on the history department’s part” and prompting multiple pranks on Worley, dragging him onto the prank battlefield.

Some of these pranks included zip-tying the Computer on Wheels (COW) shut on the day that Worley requested them. Upon cutting ties on the COW loose, Worley found that Mr. Roberto Clemente had also stolen and hidden all of the computers inside. In another instance, Worley’s whiteboard was covered in pictures of him posing with a wax statue of Arnold Schwarzenegger.

“Probably the best one was Clemente has an electronic cricket that goes off in irregular intervals and he hid it in a suit of armor. And that inconvenienced us for about five minutes … I’m being sarcastic,” Worley said. “He roped in a student of mine who had divided loyalties.”

The list of new victims doesn’t stop at Worley. According to U.S. History teacher Jeff Vangene, one of the most recent incidents claimed Somerville as a casualty, courtesy of the stealthy and undetectable Clemente. The social science teacher unplugged Somerville’s projector and left behind a picture of himself where the cord was supposed to go, letting Somerville know exactly who had duped him.

Economics teacher Mrs. Cyndi Oji-Marchese, having the misfortune of occupying the room directly next to Clemente’s and down the hall from other notorious pranksters, has also been sucked into multiple schemes.

“For me, it’s been mostly people just steal my stuff. Certain colleagues will come in here and perhaps take my stools,” Oji-Marchese said.

She also recounted another instance when Clemente snatched her keys and enveloped it in duct tape. “I didn’t notice until I had to go to the bathroom and I was like, ‘Where are my keys?’” Oji-Marchese said.

While Oji-Marchese has been the target of many pranks, she hasn’t actively planned any.

“I haven’t orchestrated any of them [pranks], I mostly just kind of help people out. But a lot of them [pranks] stem from the very creative minds of some of the teachers,” Oji-Marchese said. “Some of my favorite ones … Ms. Seipel’s desks were all in the hallway upon her arrival to school; that’s probably one of my favorites. Another one is when we spammed Mr. Clemente’s classroom with pictures of our colleagues when he was out one day.”

Other teachers in the 1000 building, like social science teacher Mr. Samir Khatri, try not to be involved, opting to be the “Switzerland in this thing” and not go after anybody. Still, that doesn’t mean that they haven’t been involved in pranks before.

“At the site that I was at before, I would take a teacher’s Expo pens, so she couldn’t teach her class that day until I gave her Expo pens back,” Khatri recounted as an example.

These newer pranks stand in addition to the other classics, like sending Clemente messages “from the future,” smothering cars in sticky notes or saran wrap and sealing school supplies into solid cases of jello.

At the center of all this drama, sits one teacher who — despite an onslaught of allegations from his colleagues — adamantly claims to be innocent: Clemente.

“I have been picked on by several teachers, inappropriately, either pranking me or blaming me for pranks. I think it has a lot to do with my bubbly personality and the fact that, I live a carefree life — people can be jealous. So, once in a while, they’ll bring my name up inappropriately as a prankster. I don’t know where it comes from,” Clemente commented.

Despite pleading innocence, other teachers maintain that he’s involved, commenting on the responsive nature of his pranks.

“He doesn’t think about it. He’s too reactive. His response back to our sticky notes was to have his TA go and put sticky notes on my car, but it wasn’t my car — it was Farmer’s car. It was at the back parking lot and then an email came through and they were looking for the kid who was vandalizing someone else’s car. So, that wasn’t really smart,” history teacher Mrs. Karie Chamberlain said.

In fact, the whole prank war began between Chamberlain and Clemente as a way of joking around with each other. Since then, Clemente says, other teachers have joined in on the fun and they “are all actually trying to get each other once in a while.”

“I think the pranks are great,” Clemente commented. “I encourage everyone to prank me all the time; I think it’s a great way of being very playful with your coworkers.”

These pranks can get intense sometimes, but at the end of the day, remain light-hearted and fun. Vangene commented that the prank war changes up their day while giving them something fun to laugh about. Khatri similarly agreed that the pranks help lighten the atmosphere.

“I think it kind of reminds us that this is still a fun place to be,” Khatri said. “And that’s one of the reasons why I never see them as a particularly horrible thing. Sometimes we have stress and stuff going on, and it brings a little bit of lightness to the building.”