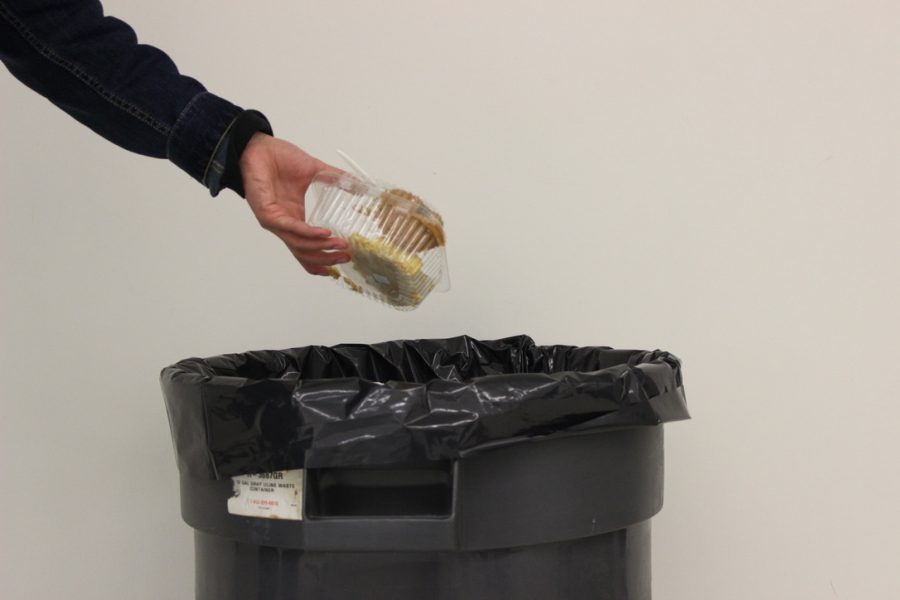 Following lunch and brunch, leftover food is thrown into the nearest trash can, or even left on the floor, without a second thought.

Food waste contributes more to climate change than nearly any country; according to National Geographic, the production, harvest, transport and sale of wasted food yields 3.3 billion tons of carbon dioxide, which is only surpassed by China and the United States.

“When food is disposed in a landfill, it rots and becomes a significant source of methane — a potent greenhouse gas with 21 times the global warming potential of carbon dioxide. Growing and transporting the food that goes to waste emits as much carbon pollution as 39 million passenger vehicles,” according to Forbes Magazine.

If contributing to climate change isn’t bad enough, there are other negative side effects to wasting food. One such effect is the economic cost that comes with throwing food away. Data from ReFED — a nonprofit dedicated to minimizing food waste — in 2018 shows that the U.S. alone wastes approximately 63 million tons of food annually, which equates to a $218 billion loss.

However, the issue isn’t so clear cut. A large portion of food waste comes from oversized portions. American culture heavily influences food waste. With the abundance of portion sizes in restaurants and grocery stores, a lot goes to waste. Lisa R. Young, Professor of Nutrition at New York University, tells The Washington Post that as food gets relatively cheaper, people tend to pile it up on their plates. Food waste also stems from throwing away produce that is seen as grotesque or deformed, even though it is as nutritionally viable as the perfectly proportioned fruits and vegetables we see in high-end grocery stores.

“If it’s not the right size, the right color or firmness, then it doesn’t get put on the shelves,” AP Environmental teacher Mrs. Heida Shaw said.

Farmers dispose of this “imperfect” produce by sending it to landfills rather than food banks and other organizations who can help redistribute the food to low-income areas, due to several factors.

The first reason is that there are many costs associated with donating food, whereas throwing it away is a more efficient and inexpensive solution for farmers.

“Stores often don’t have the space to store leftover food while they are waiting for agencies to pick it up. And food banks may not have the capacity to transport or properly store the food if it’s highly perishable. Even worse, many stores don’t even know they should be donating their leftover food or where to donate it,” an article from Business Insider states.

The second, also from Business Insider, is that many vendors are mistakenly afraid that if the food they donate causes someone to become sick, they are liable and will be sued. However, in 1996 Congress passed the Bill Emerson Good Samaritan Food Donation Act, which protects donors from civil and criminal liability for donating food in good faith. Still, liability reasons often deter corporations and other businesses from donating.

More specifically at Dougherty Valley, an immediate consequence of the lunch rush is the food wastage. Most food items are prepared from scratch every morning, and many of these foods have a limited shelf life for safe consumption.

“We’re able to hold cold foods [like salads and PB & J’s] much longer than hot foods. So we’re not really wasting those, since we can calculate accordingly and save them for the following day. Hot foods, that are [served on the same day] are time-sensitive, so many of them can only be eaten in the danger zone within four to six hours,” Child Nutrition Manager Stephanie Curry said.

Curry takes into consideration different factors that may impact the number of lunches consumed to prevent excessive food wastage on a daily basis.

“I look at variables such as, are there any field trips? Will students be out for the week? Is it a minimum day? Are there a lot of clubs going on today? Is there a special event, maybe Homecoming or something going on, that will pull kids out of the cafeteria? I’ll also take into account the weather: for example, on colder days more kids come in to eat versus when it’s sunny outside and they’re hanging with friends,” Curry said.

On an average, Curry estimates that between 30 to 50 food items have to be thrown away everyday.

It’s clear that food waste is a problem, and that, despite our best efforts, Dougherty still contributes to that problem. While the wastage itself is inevitable due to the fluctuating number of students who buy lunch everyday, we can still make an effort to reduce our waste.

Shaw brings up a few solutions, including donating food to food banks, eating “ugly” food to reduce unnecessary waste and shopping daily rather than buying in bulk so you buy “what you actually need rather than what you’re anticipating you’re needing — that might help.”

“I would love to see people think more about what they put in their body before they actually purchase all this food. You don’t need as much food as you think you do. And the packaging is a huge amount. There’s not just the food waste, but there’s the packaging that comes along,” Shaw said. “Thinking about reusable packaging when buying food is also a huge, huge thing that you can do to change the amount of waste that’s actually produced.”