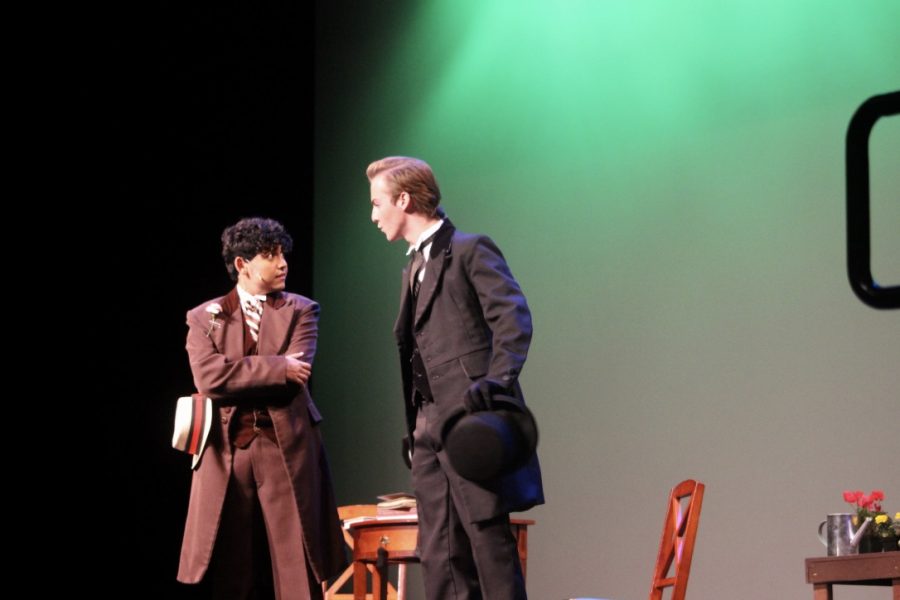 AJ Sohrabi, as Algernon Moncrieff, and Jose Saramiento, as John Worthing, argue over the name of Ernest.

Dougherty Valley Drama began their production season with the classic satire play, “The Importance of Being Earnest” by Oscar Wilde. The play revolves around the lives of John Worthing (Jose Saramiento) and Algernon Moncrieff (AJ Sohrabi), and their creation of alter egos to justify traveling inconspicuously around two settings: the town and the country.

Through the course of the play, the audience is introduced to Cecily Cardew (Samantha Frias) and Gwendolyn Fairfax (Izzy Roth), who both convey their infatuation with marrying a man by the name of Ernest. The question “What’s in a name?” takes on a very literal meaning throughout the play, as Worthing and Moncrieff fight for the mantle of “Ernest” to please their respective beaus.

The production stayed true to Wilde’s theme of satirical criticism of the Victorian era. The play continually took jabs at the convention of marriage and used the literary element of farce to highlight the sentiments of rigidness during the era. The minimalist background and prop use emphasized the performance and the cast’s style of physical acting.

Senior Lauren Ottley, who portrayed Lady Bracknell, Moncrieff’s aunt, stated that the unique style of acting connected the English play to a high school audience. The relatability factor came through with the actors’ use of “blocking,” which contributed to the active presence of physical comedy.

“Doing a super dense British play … [we were] trying to give cues to people with the intonation and pausing for emphasis to make sure people understood,” Ottley said.

The cast overcame the challenge of relating the play to a high school audience, piquing visual interest and expressing the struggles of conformity as they effortlessly maneuvered the stage.

“The play in and of itself is a story of trying to fit in, and that’s really relatable. I think that they did a good job presenting it that way,” Uscian said.

A vibrant audience made up for the low turnout on opening night, as students cheered for their friends on stage. AP Literature teachers sat amongst the students, eager to witness their required reading text brought to life.

While Wilde’s satirical humor is relatively difficult to pick up on in the text, the cast succeeded in bringing it to the forefront through perfected tones and vivacious expressions. Algernon’s servant Lane, portrayed by Samukh Cadpakar, stood out despite not having many lines.

The audience seemed enthralled by Cadpakar’s performance as he captured widespread attention through his creative use of blocking. He stood in the background of most scenes, taking swigs of alcohol and smoking the occasional cigarette. His on-stage presence further connected with Wilde’s portrayal of high-end society. Lane, as a character in the print version of the play, served no further purpose than to introduce other characters, but DVHS Drama spun the character successfully with Cadpakar’s eclectic performance.

Cadpakar says that his main intentions with the character were to engage the audience at times when the show was moving slowly and to provide content that “kept the audience motivated to watch the show.” Cadpakar furthers his connection to his character by commenting on how he deconstructs his lines in the show, and formulates a meaning for his character.

“I envisioned the character as a lousy but loyal butler who simply uses his master’s alcohol to fuel his addiction … By adding intentions for the character based on what I was able to receive from the text, a couple of lines became more impactful on the stage,” Cadpakar said.

Sohrabi stated that his journey with drama has “drastically improved” how welcome he feels at DVHS.

“I’m forever thankful to my freshman year self for joining drama during that year’s Evening of Theatre. It’s always such a pleasure to hang out with my friends and create something amazing,”  Sohrabi said.