Blocking Your Writer’s Block With These Foolproof Tips 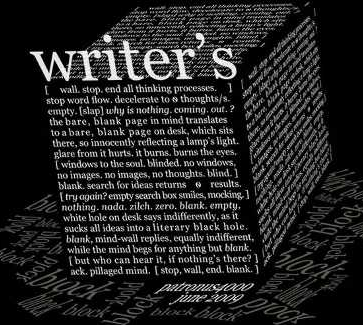 The unicorn stared broodingly at me, eyes seeming to say “Do you really think so?”

I looked away. “O-obviously. I…” My words suddenly came…

You stare at the keyboard, or the piece of paper with words sprawled across it, hand shaking with fear. Your mind races desperately, but after several seconds of nothing, you drop to the floor and wail, “Noo! I have been cursed with a terrible affliction! I have…” You fall down onto the ground, tears streaming freely down your face. With a horrible ache in your heart, you whisper, “Writer’s Block.”

Don’t you just hate how Writer’s Block can turn a future bestselling novel into a half-written manuscript that would only be spoken of in hushed whispers? Well now, armed with these 5 tips I’ll give you, you could turn that manuscript-which-must-not-be-spoken-of into a manuscript-that-could-be-spoken-of!

5. How Would Chuck Norris Write It?

Well, it doesn’t have to be Chuck Norris. It could be anyone whose writing you admire, from Stephen King to an obscure fanfiction writer. Choose a person, and pretend the story was written by that person, and you ARE that person. Take up the strings, and manipulate your characters as that person. Bringing them to life, killing them off, showering them with tacos- whatever that person would have done. You don’t necessarily have to use the writing you wrote while pretending to be someone else, but the new perspective could inspire you, or get you excited about the story again. It could be the push you need.

I spat on the ground, and lowered my hat. “I’m absolutely certain,” I replied in a gravelly voice, narrowing my eyes. “Ya got ah problem wit that?”

4. Be One With the Character

If you were talking to a unicorn who just asked a really deep question, how would you react? Conclude you’re hallucinating, and getting the medical attention you need, I hope.

But add in more elements from the story, such as “unicorns are normal”, “this character is an idiot”, or “magic exists” until you get an in-character response. Become the character fully. Pretend you live in that world.

The unicorn lowered his head, eyes staring at the ground in shame. “No, I don’t,” he replied slowly. “I’m sorry for earlier. I was just…caught up in my thoughts. Chuck, I can’t hide it any longer. I need to tell you something.”

A plot twist that comes out of nowhere, and is expected by no one is the perfect way to continue to write. You’ll need to write several pages trying to explain how the plot twist was definitely foreshadowed, and that you definitely planned for it to happen. Then, you’ll need to actually WRITE the consequences of the twist, and try to fit it in to the story. Writer’s block usually comes when you don’t have any short-time goals that you need to get the characters to strive for, and all you could write about are them sitting around, twiddling their thumbs which is a bore for the readers, writer, and characters.

“I’m actually a pony,” the unicorn whispered shakily, not looking at me.

The unicorn reached up, and pulled off his horn. “I’m sorry. This is just a party hat, and I’m not magical at all.”

Characters are boring if they’re just flat, 2-D characters. They should feel like they are actual, real, live people or animals or inanimate objects wit whom the reader can sympathize. Therefore, character development arcs are always welcomed. So, since you could make the arc any time, you might as well make it now. Maybe when the new side of your characters you’ve never seen before come to light, it will light up a light bulb over your head.

However, sometime, the characters can’t exactly go anywhere or do anything significant because they are hiding or something else. That is fine, just make them nostalgic and have tons of flashbacks.

I remember it all now. I was a young’un, too innocent and naïve for the cruel world. However, that all changed when the great sheep-knight attacked my beautiful homeland of Imperial Nebraska…

Sometimes, a writer’s block block you not because you don’t know what to write, but because the characters couldn’t achieve it because they are either too stupid to come up with the plan, or they gave away the last McGuffin seven chapters ago, and the trolls at the bridge would accept nothing else, or whatever. The point is: getting them from point A to point D is too exhausting, and you wished that you had thought the story out more thoroughly so they would have the thingamabob right now.

But what is this? A stranger stands gallantly right there, near the setting sun! Here with exactly what we need! How could we thank you, character I’ve never seen before?

“Yo yo yo. Sup homies?” a llama asked, floating by. “Heard the word magic and I just wanted to tell y’all how much I love magic, man. Like, my carpet is magic, and I’m magic and I breath magic. I’m pretty much the most magic magical living creature you’ll ever find, man. Magic. I just love it.”

Armed with these 5 tips, I now deem you worthy to fight the ghastly Writer’s Block. Go forth, hero. Save the world. With the pen that writes the sword, defeat the accursed Block.