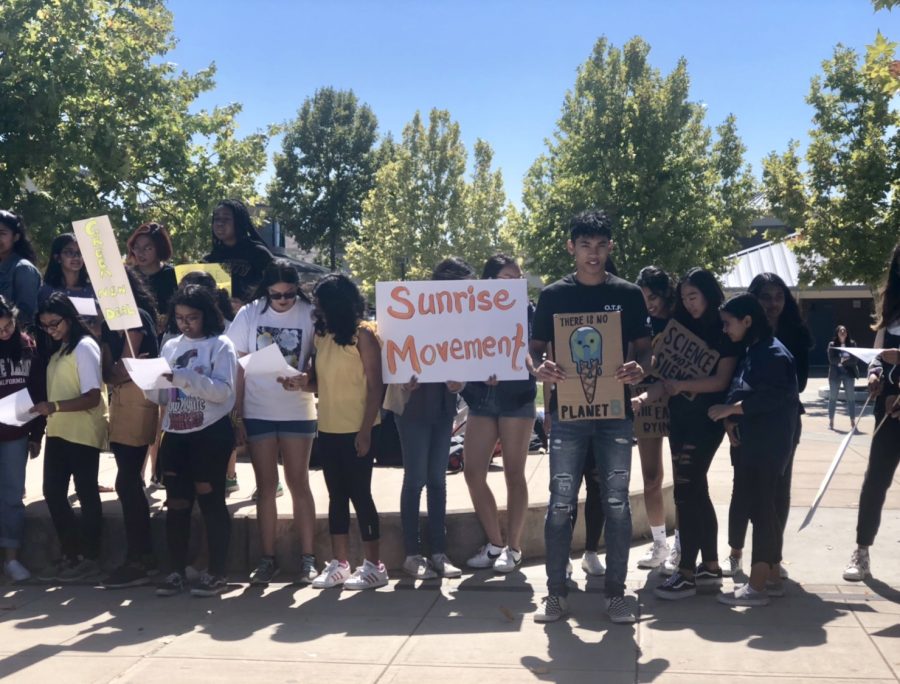 Dougherty students strike to fight climate change in the quad.

On Sept. 20, Dougherty students protested and organized a climate strike during the end of fourth period and lunch, joining many students across the country in effort to persuade politicians to treat the climate crisis as a moral obligation.

“I am a firm believer that we need to save our environment before we start dying from the impacts of climate change … I feel it is important for us to try and at least think about ways to stop this from happening,” senior Chilsea Wang emphasized.

As a matter of fact, climate strike organizer and Dougherty sophomore Aidan Mo told NBC Bay Area, “Climate change is an urgent issue and there is a time limit,” taking inspiration from climate activist Greta Thunburg.

Part of the call to action includes a call of acknowledgement. On a local level, “the most important thing is to have Dougherty students who acknowledge that global warming is happening, and on top of that, motivate them to take action. I think a lot of people are at a point where they know that climate change is happening, but they are in a phase of climate despair,” Wang stated. In other words, people are aware of climate change and are concerned, but people are overwhelmed to a breaking point.

“There are concrete actions we can take. [For instance], we can start by reducing our carbon footprint, less driving to school … It’s not to say that we shouldn’t push for policy change; that’s one of the goals of the strike,” Wang explained. The steps to change start from concrete action on a minuscule level.

Globally, “because we are all striking today, that’s to pressure the UN into actually implementing concrete change. That’s happening in the next week or so in the United States, all the global leaders are coming here.”

A detailed follow-up of the climate strike will be published in the following weeks.