The Wildcat Tribune • May 17, 2019 • https://thewildcattribune.com/6884/people/librarian-mrs-catherine-grijalva-reflects-on-nine-years-spent-at-dougherty/ 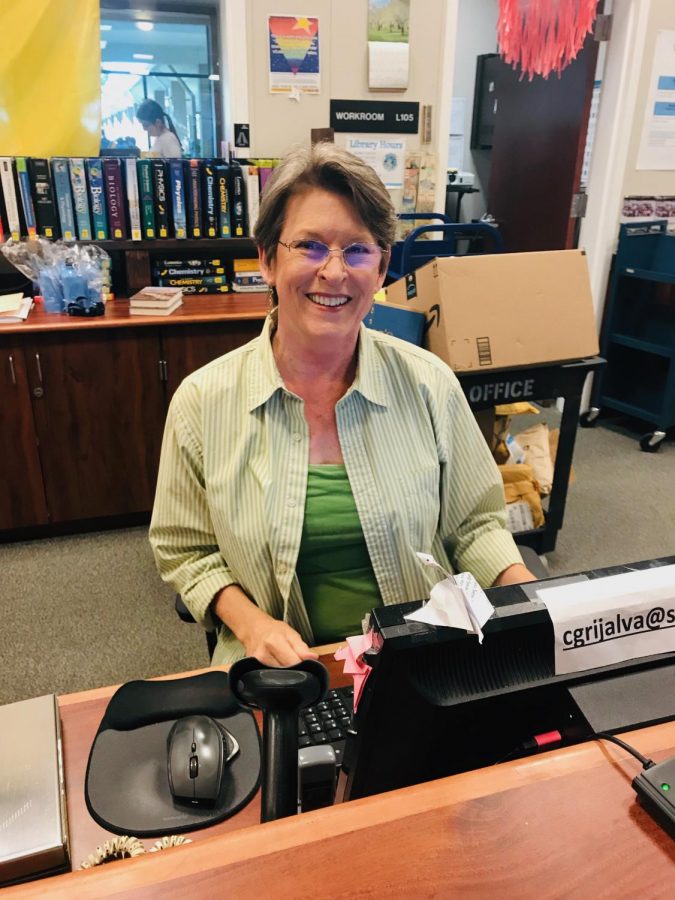 After nine years at Dougherty Valley, Mrs. Catherine Grijalva plans to retire from the library at the end of the year.

“It’s my fifth career. Even though I’ve only been here since 2008, my age is such that I’m old enough to retire. Also, my husband has been retired for two years and he wants me to join him so we can do fun things together,” she laughs. “But I’m not retiring because I don’t like it here. I’m extremely sad about leaving. I’m really not ready to go but my husband’s ready for me to go. So to keep peace in the family.”

Grijalva, nicknamed simply “Mrs. G,” has set many goals for her retirement. She wants to continue to travel, work out every day instead of just three days, wake up past 5 am, have lunches with her friends and join the Rotary and Commonwealth Club. She is also going to be involved in a library dedicated to assisted living and Alzheimer’s patients.

“Right behind my house, they built a retirement center for assisted living and Alzheimer’s. They needed a library. So I reached out to the person who is the executive director at Livermore and found out that she’s going to be the executive director here in San Ramon. And she was delighted to know I had boxes and boxes of books. So the first month after I leave, I’m going to take all those books up there and start their library for them.”

Grijalva has had experience in many fields. She graduated from Oneonta State University with her undergraduate degree in elementary and early secondary education with a concentration in social science. She then taught English and Health at Peace Corps in Africa. Once she returned to the US, she taught reading from kindergarten to third grade at a private school in Napa. Later she worked at the phone company for 19 years where she did project management in IT and also got her MBA. Then, after taking a two-year break, she started working at PeopleSoft, now known as Oracle, where she was in charge of the digital library. After that, she joined Dougherty Valley.

“Interestingly, I had no idea I was born to work in a library. I didn’t find out till I was 50. I was in my 50s when I got the job here, and I had no idea that this was the best thing ever because it has an education. It has databases, and I love books. Having a job here gives me a chance to be around education and do the teaching and at the same time, use the skills I learned in the corporate world. So I get to use the database, Word, Excel and the communication skills. It is all in one place,” Grijalva states.

When she first joined the school, she worked as the textbook clerk part-time and was the only one at that time. After joining the library, she studied at Diablo Valley College where she got her Library Technology certificate.

“I went to college at night, then came to work the next day and used what I learned because it was a practical application where I learned how to catalog books, learned how to do research online and also with encyclopedias,” Grijalva states.

Apart from this, she also visited other libraries such as the library of the Naval Graduate School in Monroe, San Francisco public library and Contra Costa library to learn by observing them and asking questions.

Her interest in working in a library doesn’t just come from the work she does, but also the students.

“I appreciate and adore the teenagers here. You guys are life-affirming. You keep me young. I just love seeing life through your eyes,” Grijalva states emotionally.

Many students visit the library often to spend time with Grijalva. One such student is Shristi Anand, a sophomore at Dougherty who loves spending time with her and meets her almost everyday.

“She is awesome. She is really wise and smart. I like to spend time with her because she is super nice, especially once you get to know her. She truly cares about everybody, and yes, she can be strict, but I would say that it made me a better person. Honestly, I am a little upset that she is leaving earlier than expected, but at the same time, I am really happy for her!” Anand states.

She also has a special relationship with senior Alise Bruevich, who she shares a birthday with. Every year on May 22, they go to the conference room to celebrate their birthdays. They hope to continue this tradition after they both leave Dougherty Valley.

“I met Mrs. G through library volunteering last year and we totally hit it off. She is so understanding and gives great advice! It’s so easy for us to have normal conversations and I love talking to her. She has talked to me about school and life and I value her opinion greatly. Our shared birthday is one of my favorite parts. We get together with one other volunteer and have lunch and exchange presents and it’s very sweet. I appreciate that connection that we have because it brings us closer. I’m so sad Mrs. G is leaving Dougherty. I know she has greatly enjoyed her time here, however, and I wish her all the best in future endeavors! I will greatly miss her and will remember her forever.” Bruevich states.

Grijalva has formed strong bonds with multiple teachers, one of them being Dougherty’s librarian Mrs. Kerri Knapp. Their relationship has strengthened over the years since they work closely with each other for eight hours every day. Knapp focuses on the teaching, managing, and the budget whereas Grijalva manages the technology part of it, complementing one another.

“I tried to tell her that it wasn’t allowed. But she ignored me and she’s retiring anyway. No, I’ve been in denial. It’s like losing a limb. I mean, we have been working together for eight hours a day, five days a week for the last seven years. So, you know, she knows what I’m going to do before I know it. I would absolutely call her friend. You know, I mean, I’ve been over to their house. I know her husband, she knows my husband, but she’s more than just a colleague, she’s definitely a friend,” Knapp states.

Apart from Knapp, Grijalva is the “work mom” of Annie Nguyen, a science teacher at Dougherty, as this is what Nguyen referred to her when they first met. According to Grijalva, this made her feel old at first, but once she realized that she was about her mom’s age, she started referring to her as her “work daughter.” So, they formed a mother-daughter relationship at school. In fact, Grijalva and her husband attended Nguyen’s wedding last year in Southern California. Nguyen got to introduce her to her actual mom and they shared a moment together.

“After having moved here from LA, I was really looking for a group of people I could feel comfortable with and Mrs. G just has that wonderful sense about her. She is kind, very nurturing, and easy to talk to and I found myself in the library not just because I needed to for work related things but because I just wanted to spend more time with her. I found myself coming to her for advice and talking to her about things that I otherwise would want to talk to my mom about or even somethings that I would even feel uncomfortable talking to my actual mom about,” Mrs. Nguyen states.

Grijalva is also close with her “guys,” the name she denotes to history teachers Mr. Jeffrey Vangene and Mr. Johann Somerville. They try to make it a point to meet her at least once a week and they remind her of her two sons.

“I enjoy her sass and sarcasm. She has a style of wit to her and humor that you don’t find it most and some can find it embracive but when you get her, you know she’s the most loving person. She’s so dynamic. We are losing individuals like this every generation. The water is getting more diluted where her physical and mental presence is just adored and appreciated. I don’t want her to leave,” Mr. Somerville states.

In fact, Mr. Somerville has a message for Grijalva: “I will send you mean spirited messages. I will TP your house and egg you if the person who replaces you is not good. And then I will chase them out of here so you have to come back. Ha!”

Overall, Grijalva has enjoyed her experience here at Dougherty and hopes that people remember her as a kind-hearted person instead of the bad cop.

“I love everybody here. Because sometimes I think I come across as stern, like the good cop-bad cop. Mrs. Knapp’s the good cop and I’m the bad cop. [But] underneath the stern exterior, I am a softy,” Grijalva says.