The Wildcat Tribune • May 6, 2019 • https://thewildcattribune.com/6864/sports/mens-lacrosse-falters-against-clayton-valley-but-recovers-against-rival-gaels/ 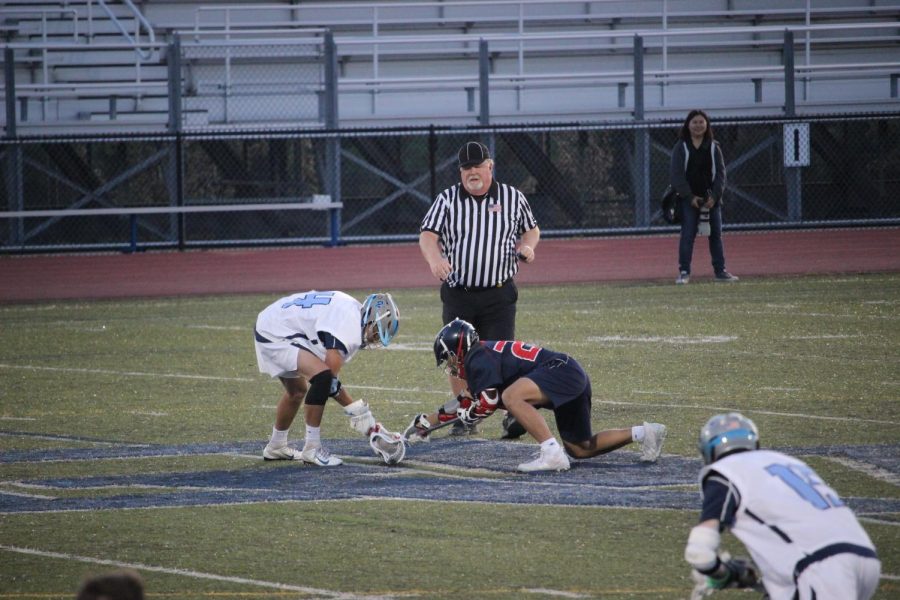 Dougherty Valley senior attacker Hudson Price faced off against a Dublin Gael at a home conference game on April 16.

Dougherty Valley Men’s Lacrosse faced off against the Clayton Valley Charter Eagles on April 9 and Dublin High  Gaels on April 16. The Wildcats lost their game to the Eagles with a final score of 7-8, but their persistence managed to secure them a strong lead in their game against the Gaels, ending 11-5.

The Wildcats scored their first goal against the Eagles mere seconds into the first quarter. DV senior attacker Hudson Price scored the second goal soon after, and three minutes into the game, Dougherty was up 2-1. The Eagles’ coach shouted at the Clayton team, urging their defense to communicate as they gained possession of the ball eight minutes into the first quarter. Price attempted to score more goals as the team moved the ball down field, following Clayton’s possession of the ball. The Eagles tied the score at 2-2 with three minutes left, but Dougherty senior midfielder Evan Siu scored Dougherty’s last goal of the quarter, ending quarter one in the lead 3-2.

The Wildcats racked up the score quickly as they entered the second quarter. Six minutes in, Dougherty dominated 5-2. The quarter seemed to be clearly in Dougherty’s favor, but the last two minutes outlined a shift toward the Eagles. Clayton Valley scored three more points, ending quarter two 5-5. Clayton Valley continued to gather points at the start of the third quarter, ending at 5-8. Dougherty tried to make up for the point gap as they entered the last quarter, and managed to raise their score to 7-8, but missed the opportunity for a deadlock and ultimately lost the game by one point in a heartbreaking way.

On April 16, the Wildcats took on their rival, the Dublin Gaels. The home team attempted to score several times in the first quarter, but Dublin’s aggressive body and stick checking slowed down the game. Halfway through the quarter, Dublin scored the opener. The Wildcats made a quick comeback and surpassed the Gaels with a score of 2-1. Dublin tied the score 2-2 as the first quarter ended.

Beginning the second quarter on a strong note, the Wildcats’ defensive stick checking and swift passing enabled them to take the lead, 3-2. Following the face-off, Dublin gained possession of the ball and tied the score, 3-3. With four minutes on the clock, DV scored another goal to regain the lead, ending the quarter 4-3.

Dublin gained control of the ball following the face-off that opened quarter three. The game seemed to stagnate, with neither team scoring goals. Eight minutes into the game, Dublin scored their fourth goal, closing the third quarter 4-4. Two minutes into the fourth quarter, Dougherty had scored two additional goals, and continued to rack up points. With five minutes left, Dublin managed to score their last goal, leaving the score 8-5. The Wildcats further commanded the game, scoring three goals in the span of three minutes. Their last goal of the game, scored 20 seconds before time was called, ending the game with an easy 11-5 victory.

Dougherty’s strong win in their game against Dublin came as a much appreciated surprise following their close loss against the Clayton Valley Charter. On April 19, the Wildcats lost against Monte Vista 17-6 and will face off Dublin again at an away game on May 3.