Speech and Debate the new clack, a senior debater reflects 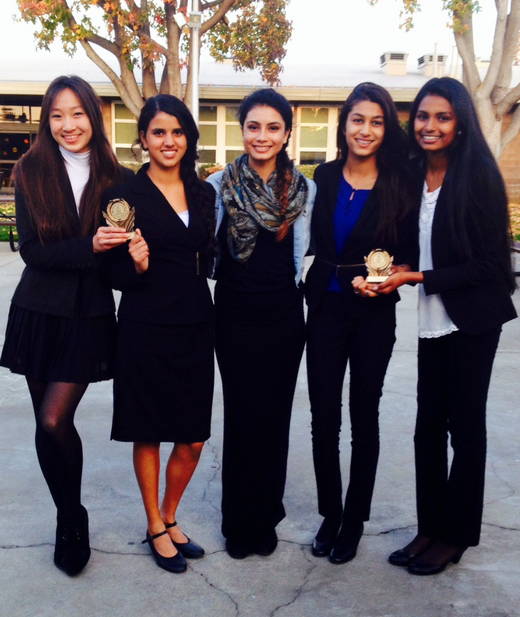 In every class, you’ll notice us. We are the ones who listen inquisitively to class discussions. We hear every opinion and notice every slight voice inclination. We’ll see you twitch your fingers nervously while you speak; you’ll see us stoically jot down notes from your speech. And then we will stand, look around the room, and enjoy the stillness for a moment. Then our voices will reverberate with well articulated opinions, scholarly facts, and research you didn’t think to bring. And before you know it, there are more than one of us in each class. On weekends, before you even consider waking up, we are speaking and debating at high schools all over the state. When you are lumbering around your house in pajamas on Saturday mornings, we are clad in sharp black suits, running to debate rounds or performing our scripts. Welcome to the world of Speech and Debate-we are loud, proud, and impeccably good-looking. Or so we appear when we drop some real world knowledge in the constructed setting of a classroom.

It’s difficult to put into words what DVHS Speech and Debate really means to me, but I will try to. And especially since this year we have seen huge increases in the number of novice members, it’s hard to ignore the ubiquity of our eloquent new batch of competitors. Forensics-another word for Speech and Debate-at the high school level consists of two main categories of competition: speech events and debate events. This year we have welcomed new members into every event Dougherty Valley offers; our competition has increased dramatically in Prepared Speech, Interpretation, Extemporaneous Speaking, Congressional Debate, and all four debate events-Policy, Lincoln-Douglas, Public Forum, and Parliamentary debate. The load of new membership was definitely incentivized by Dougherty’s victories last year, including twenty-one State Championship qualifiers, State finalists, National competitors, and numerous sweepstakes awards from the Golden Gate Speech Association.

It didn’t really hit us senior members that with this new crop of competitors an increased workload and resource management would accompany it. Our club president, senior Nitisha Baronia says, “Our club has certainly grown exponentially over the past few years, and while that may come with its coordination difficulties, it’s certainly worth it. More members means more tournaments, stronger events, and greater peer to peer mentorship.” Vice president senior Jamie Shen adds on, “I think that it’s a great that the club is growing. Naturally, with a larger club, we also have a lot of talent too so I think the combination of the growth in size and strong competitors is helping Dougherty make even more of a name at league, circuit, and national tournaments.” Whatever we are putting in-whether it is through coaching, mentorship, lecturing, running practices regularly-it is beginning to shine through to club successes.

But the journey is not easy. Speech and Debate is very much a partnership between the competitor and their captain or coach. After school practices can range anywhere from two to three hours at least twice a week. Keeping the interest and dedication of a new competitor for that long can often be challenging, but our incredible captains and coaches find ways to do it. Jamie furthers, “I think within the club at the high school level, there’s always been a sort of tradition for the seniors to help the novices and it’s something that as we progress, have carried on. I distinctly remember Eric Wang critiquing my Extemp speeches, and Patrick Liu looking at my first league LD cases. I think that it’s one of the best parts of the club- as a whole, there are so many friendly, committed, and helpful individuals who become not only your mentors, but also your friends.” Engaging the inner potential each debater or speaker shows takes an immense amount of research, practice, speaking drills, and critical thinking. But once that potential explodes in a debate, and you witness your young debaters or speakers bloom before your eyes, it is all suddenly worth it. The people you learn from are your mentors, your senior members, and incredibly, some of your closest friends.  And while our new competitors are just getting used to the spirit of rigorous competition, they are excelling at their events. Ask Rucha Kulkarni how ecstatic she was when she placed second in Humorous Interpretation at the CSU Long Beach Tournament. Ask Chait Sayani how he felt when he made it to finals at the Jon Schamber Invitational in the novice Lincoln-Douglas debate division. Ask Shreya Tumma and Shreya Aggarwal what was going through their minds during their octofinal round at the Presentation Invitational, or ask their teammates Anjali Mishra and Isabel Ting the joy they experienced when they found out they were in semifinals at the same tournament in novice Public Forum debate. It’s no doubt that even our senior members are creating legacies for themselves this year, as recently proven by the victors of the National Parliamentary Debate Invitational, Dougherty’s own David Wang and Karthik Konath. And looking to the future, us senior members have a vantage point to our predecessors and their early victories-and to be honest, there is no other feeling quite like it. Mentorship within the club is taking a more preeminent form now. The captains are hitching their team’s success to their own speech and debate careers, investing as much effort to prepare them for tournaments as they do for themselves. It is a new kind of achievement for our club-the reassurance that when this year’s class graduates, and then the next year’s and so on, that the Dougherty Valley Speech and Debate team will continue to nab top honors.

Along with the trophies comes the inevitable camaraderie between teammates. Speech and Debate fosters something very different in each competitor-a hunger for competition, a knack for shiny trophies, the talent for acquiring real world knowledge and applying it. When all of these diverse personalities come together, strung side-by-side by their love for the team, it makes for a pretty good time. As the club expands, the senior members get to impart not just their elevated skills, but also the friendship and social identities created during after school practices, long car rides, and trips to state and national tournaments. Nitisha explains, “I think my favorite part of Speech and Debate has got to be building relationships. That time in between rounds at a tournament spent hunting for food or creating a makeshift karaoke session in the rain is priceless, and appreciating that is what makes Dougherty’s Speakers and Debaters unique.” Jamie concludes, “I love the team dynamic that we have- win or lose, there are so many amazing people who are there to comfort you or cheer you on.”

It is clear that Speech and Debate doesn’t only make you a better competitor or a more eloquent speaker. Forensics teaches you how to interact with people, how to talk to them, share your ideas, and build connections. The club is much more than weekend tournaments, tailored suits, and bottomless folders of evidence. The club is a part of us as much as we are a part of the club. Speech and Debate has taught me more about the world around me than anything else has. In a way we each live double lives-in school most of us are bookish, dedicated students. But after school and on weekends we morph into mentors, organizers, and best of all, competitors. We chase knowledge, ballots, wins and even losses. We are individuals who become powerful when we speak with our brains working at remarkable speeds, and who leave rounds feeling more exhilarated than ever.  So the next time you see us on Facebook hoisting trophies, or in classrooms after school running practice debates, or standing up to defend controversial opinions in class, know that we do it for one simple reason: we love it more than anything.