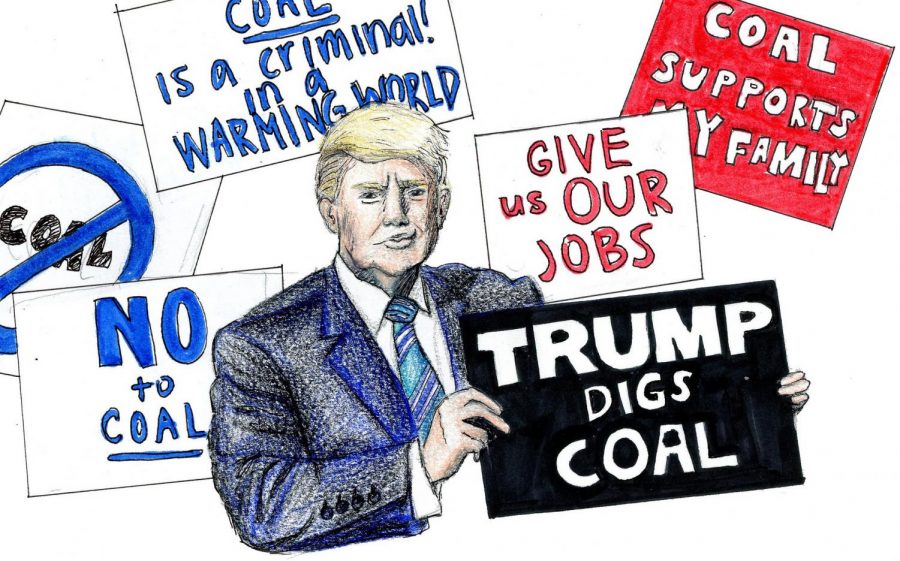 In review, President Trump's policies on coal have had daunting repercussions for the environment and, while initially promising, questionable economic consequences.

“We’ve ended the war on clean, beautiful coal,” President Donald Trump announced at a rally in Cedar Rapids, Iowa. “We’re going to put our miners back to work.”

However, coal and related jobs aren’t on the rise in the US, with coal usage and demand down to its lowest point since 1979. Overall, according to the American Coalition for Clean Coal Electricity (ACCCE), since 2010, nearly 40 percent of the US coal fleet has been shut down or is planned to shut down. In fact, the Peabody Energy Corp., which is represented by the ACCCE and is the world’s largest private sector coal company, declared bankruptcy in April 2016.

In the meantime, miners have been floundering. While the number of miners has been declining overall — 2015 boasted 59 percent fewer coal miners than there were in 1980 — automation is set to uproot thousands of the roughly 70,000 remaining miners in America. The International Institute for Sustainable Development in Winnipeg, Canada, has estimated that automation will replace anywhere from 40 to 80 percent of remaining coal jobs.

“[The US] needs to be preserving [coal jobs] right now because green energies are currently not efficient enough to sustain the US power need,” AP Economics teacher Mr. Daniel Farmer said. “Economic-wise, since [coal] is a resource we can harvest and a good we’re already set up to produce, whereas [for] electrical power we would need to devleop more infrastructure.”

Although promises to bring back coal at the benefit of miners have been largely unfounded thus far, the US is still coal dependent.

“Right now the US is not off coal or petroleum, even though there’s a green movement or an electrical movement,” Farmer said. “Coal power is still [being] used.”

Meanwhile, Trump has taken action to support coal companies. In addition to the President’s recent move to nominate Andrew Wheeler — a former coal lobbyist — as the head of the Environmental Protection Agency (EPA), the Trump administration has created and dismantled other legislation for the benefit of the coal industry.

So far, the Trump administration has favored rolling back Obama-era environmental protections, such as restrictions that required newly built coal power plants to capture carbon dioxide emissions and a rule governing royalties for oil, gas and coal leases on federal lands that prevented companies from underpaying the government in taxes.

The administration also opposed federal regulation of carbon emissions, proposing the Affordable Clean Energy (ACE) Rule, which would let states set their own emission limits. The rule is the EPA’s replacement for the Clean Power Plan (CPP), an Obama-era policy. The EPA reported that the ACE Rule would save the oil and gas companies around $484 million, while the CPP would cost the industry an estimated $530 million.

As established by the impacts of the ACE Rule, the legislation established and proposed by Trump yields clear economic benefits for fossil fuel industries. However, policies by the administration have created significant roadblocks for environmental advocates attempting to reduce coal-related pollution.

One particularly bold group, the National Resources Defense Council (NRDC), has sued the administration on a myriad of environmental fronts about every eight days since Trump took office. The NRDC, along with numerous other environmental organizations, has been attempting to challenge the EPA’s rollbacks under the Trump administration.

Many environmentalists fear the consequences of continued reductions in environmental protections that come as a result of attempts to revive the coal industry. While burning coal is most commonly associated with carbon emissions and subsequent global warming, there are also lesser-known environmental impacts that encourage pollution and reductions in biodiversity.

The Washington Post reported on dramatic reductions in fish populations as a consequence of mountaintop removal mining methods, in which residual ash and excess salts can enter and disrupt streams.

Likewise, Chemistry and AP Environmental Science teacher Mrs. Annie Nguyen noted that burning coal can release heavy metals, such as lead or mercury, as well as gases that have accumulated within the coal as it was formed.

“There can be gasses that are distributed inside of the coal,” she explained. “Those can be, at the very least, noxious, but at the worst, very damaging to your respiratory system if you were to breathe them in, like radon gas.”

The EIA elaborated that burning coal can produce sulfur dioxide and nitrogen dioxide. They report that these gases can contribute to the creation of acid rain and smog, respectively.

But perhaps the most troubling fact about coal is the potential for the industry’s pollutants to pose a serious risk to human health. The impact of coal ash and other pollutants on coal miners and their communities has been well-documented in recent years, and there have been numerous lawsuits led by miners against coal companies in an attempt to receive reparations for black lung-related complications.

Black lung — described by NPR as an accumulation of coal ash and silica dust in the lungs that results in respiratory complications — affects over 10 percent of American coal miners with more than 25 years of mining under their belt, according to the American Public Health Association. In certain states — notably, West Virginia, Kentucky and Tennessee, diagnoses reach up to 20 percent for workers with similar mining experience, according to the National Institute of Occupational Safety and Health. The administration has supported deregulating treatment so as to make a “less burdensome” environment for coal companies, with bills being proposed to do just that in states like Kentucky.

In addition to black lung, coal ash has been known to cause other respiratory issues and contaminate groundwater supplies if not stored properly. According to a Duke University study from 2016, storing coal ash in unlined ditches resulted in high levels of arsenic and selenium around 21 power plants in Tennessee, Kentucky, Georgia, Virginia, and North Carolina.

Miners have attempted to sue their former employers after coal ash endangered their health, but they rarely succeed. In Kentucky, it was reported by the WFPL news radio station that residents living by the Cane Run Power Plant attempted to sue Louisville Gas & Electric in 2013, but their case was dismissed by the following year.

In a similar case of coal-related pollution, a group of 900 workers from Jacobs Engineering in Tennessee who assisted with the cleanup of a coal-ash spill in 2008 are now dealing with serious health complications. Workers were once assured the ash was completely harmless, but their reality is starkly different from that of their employer’s promises; of the original 900 workers, the NRDC reported in December 2018 that 200 are suffering from ailments caused by toxins in coal ash, while another 30 have died. The coal ash pollution has proved extremely pervasive as time has passed, with children of the workers also facing illness. The remaining cleanup workers are pursuing a lawsuit and are still fighting for reparations from Jacobs Engineering.

Although Trump has sought economic benefits for coal companies and the industry as a whole, miners are receiving no further protections in spite of medical evidence, protests and lawsuits that indicate serious threats in their working environment. As the administration has proceeded in stripping environmental protection legislation to reduce regulations on coal, it seems that they have simultaneously been endangering the health of the people they hope to employ.

While the coal industry has seen a decline and miners have expressed concern about the lack of protections for their line of work, the growth of other energy industries may offer new opportunities for miners. Certain renewable energy sources are becoming more widely used in the United States, such as solar, wind, hydroelectric and geothermal power. In states like Colorado, the estimated costs of using wind and solar energy are lower than the estimated costs of continuing the use of pre-existing coal plants, according to Vox. In certain regions of the United States, renewables could help cut costs and provide energy without the health risks associated with coal-related pollution.

Certain renewable industries are growing at an impressive rate, with the solar industry hiring workers 12 times faster than the overall economy, according to the Harvard Business Review (HBR). In a study by the HBR, they found that it would be possible for most workers currently employed by the coal industry to transfer their skills and increase their income by as much as 7 percent with retraining in solar industry jobs. However, these jobs aren’t being created where many miners can benefit; in other words, any possible transition to renewable energy sources from coal are not as easy as one might believe.

In states where jobs in renewable industries aren’t readily available, there might still be alternatives for miners who are seeking work outside of the declining coal industry.

“If there are other minerals or resources that are still being mined — because we’re still mining aluminum, and we’re still mining different rare earth metals — they could transition that skill from mining coal to mining a different resource instead,” suggested Nguyen. “Which might require that they move somewhere, or it might require a change in their quality of life. And that’s unfortunate, and that’s what makes this issue so challenging in our country.”

Trump assuaged coal miner fears on the campaign trail by insisting he would bring back coal jobs, appealing to rural pockets of states like West Virginia and Kentucky. Jobs in solar energy aren’t exactly abundant in such areas, with the states being ranked 45th and 41st, respectively, in terms of solar jobs per capita according to NPR. Additionally, coal-reliant regions of the United States are less likely to have incentives for transitioning to dependence on renewable energy, further exacerbating unemployment caused by the lack of coal jobs.

It’s likely the transition to renewables in coal-reliant states won’t happen on its own, and that consumer decisions will greatly influence whether or not a shift to other industries will succeed. States like California have populations that have shown some commitment to sustainability, which has eased the transition to alternative energy sources. Citizens in Appalachian states will have to make significant lifestyle changes if coal jobs are to become renewable energy jobs, either by voting for new policies and legislation or supporting renewable industries.

“I want to be optimistic that people [will] become more educated about the current problems and where we’re currently standing. [I hope] that they’re going to vote with their wallet, and that they’re going to opt to buy even those small renewables, small household items — continuing to drive the market in a direction that is more sustainable. That’s not going to happen if there are still people that continue to purchase, invest [in] and support older tech,” Nguyen said.

Current statistics seem to indicate that the coal industry will only continue its decline. It’s unclear as to whether or not Trump’s policy changes will turn the tide and uphold his previous promises, or if there is a future for renewable energy jobs in Appalachian states. Miners throughout the United States are now facing an uncertain future, and only the future actions of the administration will determine their eventual fate.