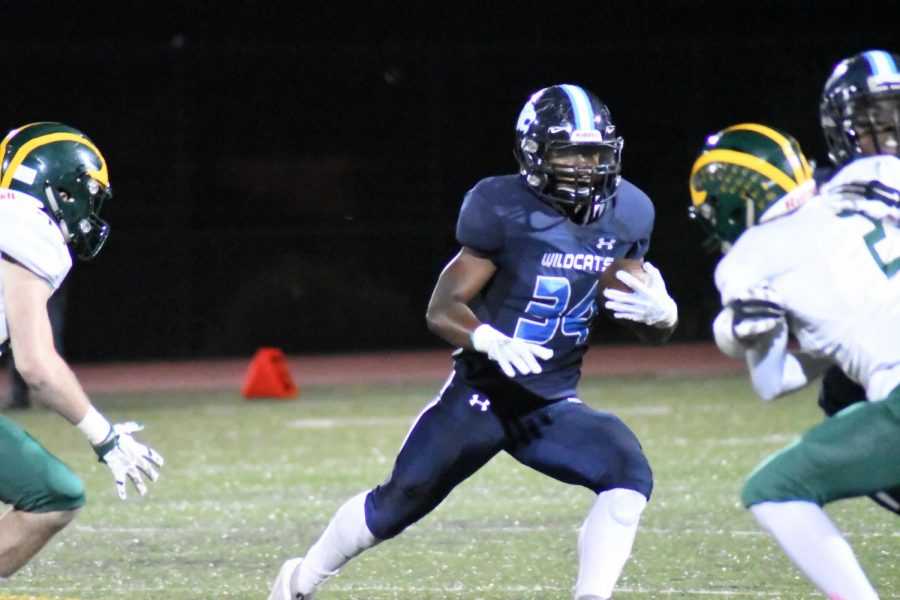 Senior Xavier Coleman rushes for a first down.

The Dougherty Valley High varsity football team admitted defeat against the San Ramon Valley Wolves with a score of 44-21 at the Homecoming game on Friday, Oct. 5 at Dougherty.

The game started off on the wrong note for the Wildcats when outside linebacker Eric Windham, junior, was injured only a few minutes into the first quarter. Multiple players from the opposing team landed on his leg, resulting in an injury that required serious medical attention. The audience cheered for Windham as he was lifted onto a stretcher once paramedics arrived.

Throughout the game, the Wolves maintained aggressive defensive plays, repeatedly pouncing upon the Wildcats during tackles. Dougherty’s defense was careless during the first quarter but started to improve during the second quarter.

SRV’s offense was very strong as they continuously scored touchdowns. Dougherty’s offense, on the other hand, only started picking up towards the end of the third quarter. The Wildcats kept missing interceptions due to dropping the ball or poor throwing throughout the first half of the game. Additionally, some of their punts were off-aim and weak.

As the fourth quarter progressed, the Wildcats picked up their slack by scoring two more touchdowns, both by running back Demonte Aleem. The extra points were scored, making the final score 44-21 with Dougherty losing.

“We got a lot of work to do. We’re nowhere near where we need to be right now. We just got to get back to the drawing board,” coach Brandon Black said.

Other highlights include Junior Varsity and Varsity Cheer teams cheering together during the first half of the game and Homecoming court winners being announced during halftime.

The next home game will be against Dublin on Friday, Oct. 26.