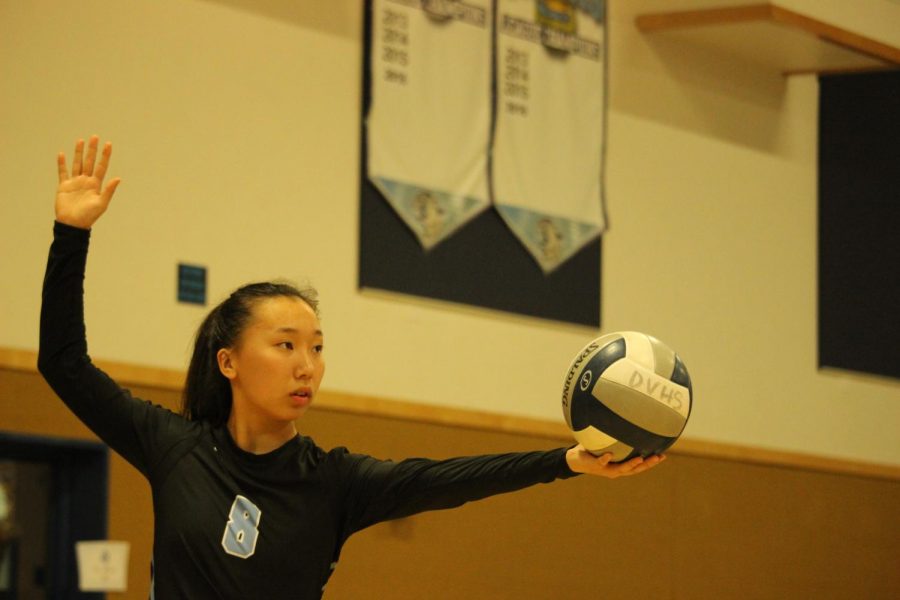 Dougherty Valley junior Elizabeth Lee prepares to serve the ball toward the California High side.

“I’m sad that we lost, but I’m not disappointed with the way that we played. They’re [Amador] one of the better teams in the league, maybe the best. I just think that we fought hard and did our best,” sophomore Olivia Knight said.

A kill from sophomore Ofure Iselen earned the Wildcats the first point of the set against the Dons. An offensive error by the Dons, with the ball hitting the net and not crossing over, resulted in the Wildcats’ second point of the match. Amador was able to quickly catch up but failed to establish a lead. After Amador junior Sophia Moore spiked the ball out, the Wildcats won the first set 25-23.

Despite winning the first set, the Wildcats suffered a defeat in the second set. The Wildcats managed to stay head-to-head with the Dons until a kill from Moore brought the score to 12-9. After this point, Amador surged ahead and built a 10-point lead. Starting with a serve from Knight at 24-15, a kill from Moore led to the Dons’ victory.

The Wildcats began the third set with a rocky start. A block error from junior Lilia Kazerooni and Iselen led to the Dons’ first point of the set. The Dons continued to pull ahead and maintained a comfortable lead throughout the set until their triumph at 25-11.

With the Dons only needing to win one more set, the Wildcats fought back with renewed effort.

Amador once again started off with a strong lead, but Dougherty was able to gradually catch up. At 22-18, with the Dons in the lead, the crowd shouted with encouragement for the Wildcats. A kill from sophomore Sarah Yao brought the score to 22-19, and an attack by Amador junior Kaitlyn McFall that landed out-of-bounds resulted in a score of 24-20. However, despite the Wildcats’ best efforts, Dougherty was unable to overcome Amador and ultimately lost the set and the game.

“I’m happy with what we saw tonight. You see the height on that team?” head coach Pat Hallahan chuckled. “They got a lot of height.”

Coming off of this loss, the Wildcats were unable to defeat the Grizzlies at the next home game as well as losing three consecutive sets.

California began the first set by establishing a strong eight point lead with a kill from California sophomore Genevieve Bane that brought the score to 15-7. Despite Dougherty gradually closing the gap to 17-15, the Grizzlies were able to pull away again. After an intense rally that ended with Dougherty accidentally passing the ball out, California won 25-17.

The second set started with a kill from California senior Clare Paraiso. However, a spike from Yao quickly evened the score. The Wildcats then temporarily maintained a three-point lead before the Grizzlies caught up and dominated the rest of the set. While the Wildcats performed better in the second set, they were still unable to overcome the Grizzlies’ strong offense.

In the second set, junior Elizabeth Lee said that they “were playing with more heart on the court, going all out for everything and not giving up on the ball,” which contributed towards their relatively improved performance.

The third set similarly started off with the Wildcats scoring the first point after Bane spiked the ball out. California, however, quickly caught up and the Wildcats lost their lead. Despite two kills from senior Taylor Knight at 21-13 and 22-15 and the Wildcats’ best efforts, Dougherty was unable to make a comeback and lost the third set.

The Wildcats will next face off against the Dublin Gaels on Oct. 18.