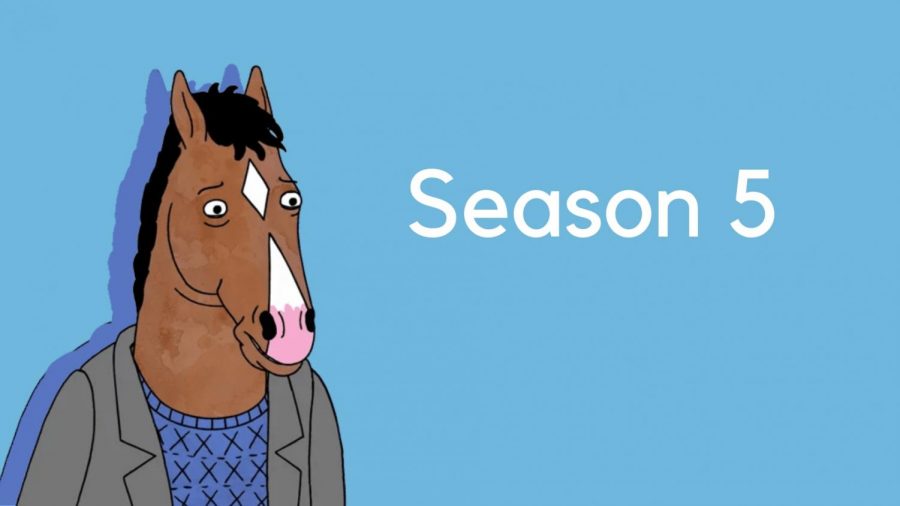 "BoJack remains, in many ways, as comically angry and self-absorbed as ever. Yet, in his search to forgive himself, BoJack is better able to understand (if not completely forgive) his mother for the splintered affection she offered over the years."

“The last days of sunset superstars”

Unsurprisingly, Netflix’s animated original “BoJack Horseman” strays further from resolutions as it dives into its devastating fifth season, touching on socially relevant topics in BoJack’s eternal struggle to be a better person.

The gritty season is interspersed with storylines centered around the show’s traditionally lighter, more comedic characters, who in the latest season become much more fleshed out.

While episodes concerning Todd Chavez, the show’s Chaotic Good comedic relief, could often be gratuitous and often somewhat pointless, the show’s discussion of asexuality did not lack. Todd may have been the only character to lack significant character growth throughout the season, with his airtime largely being used in whimsical side stories or as setup for a grand punchline.

Romance better defines the show’s other classic happy-go-lucky character, Mr. Peanutbutter. While his lovable contagious attitude is often viewed as a net positive, the latest season provides insight into how his immaturity breeds unsustainable relationship dynamics. Despite this realization, he seems unable to break his cycle of impulsive and immature behavior.

Ultimately, the show is able to turn a stock comedic relief into a more plausible character, whose seemingly untouchable persona is replaced by something a lot more human. That’s what really makes season five of  “BoJack Horseman” great: characters that once seemed to exist solely as two dimensional foils to BoJack are given new depth through conflict.

That doesn’t mean the show is devoid of trivial humor: the season continues to amuse sharp-eyed viewers with quirky visuals in the backdrop. Some more politically inclined gags playfully comment on foreign affairs, such as an American 100 dollar bill sporting Vladimir Putin’s face and a newspaper clipping that mentions a recent nuclear strike in Southern California.

“I wanted to share this with you — woman to woman.”

Despite the show’s commentary on the role of women in Hollywoo, both as actors and writers, the season’s newer female characters sometimes felt more like plot devices than independent characters. The associations of Pickles (and to some extent, Gina) primarily depend on them being the romantic interests of male characters and their roles seem to be to give others character development.

However, the season did not disappoint with Diane and Princess Carolyn, who each attempt to reconcile their broken pasts and presents.

Diane’s spur of the moment trip to Vietnam to escape L.A. and reconnect with her heritage is oddly reminiscent of BoJack’s own departure to New Mexico in an attempt to find himself. The show reaffirms that simply leaving doesn’t provide closure on its own. Rather, Diane recognizes that she is foreign to Vietnam and returns to Hollywoo from her unsuccessful sojourn.

Princess Carolyn continues to seek pathways to motherhood as she did in the previous season, this time looking to adopt. As her past pregnancy is revealed, it becomes increasingly clear as to why Princess Carolyn is so fixated on fertility. This fixation is not necessarily detrimental, as in the end PC emerges as a stronger and more driven character, motivated by her new status of motherhood.

Such are Beatrice Horseman’s last words to her son BoJack.

Although the show’s 11th episodes are known for being notorious, gut-wrenching setups for the season finale, episode six offers a different sort of reprieve for BoJack and a special mention in this review. With the truth of his less than savory past hanging over his head, the show derails from its usual storyline to let BoJack wax poetic about his upbringing.

Will Arnett takes center stage (well, podium) at BoJack’s mother’s funeral and creates a purely narrative episode. Bitter anecdotes are well interspersed with dark humor as BoJack soliloquizes to his largely unreactive audience about his relationship with his parents.

The show once again defies expectations by turning Beatrice’s eulogy into a speech perhaps more reflective of BoJack than of his mother. He vacillates between morose and melancholic, never following a clear line of thought but always returning to ponder aloud the meaning of his mother’s last words.

Despite his unresolved resentment towards his mother for never acknowledging him for his accomplishments, BoJack’s desperation to derive meaning from his mother’s last words are humanizing. BoJack remains, in many ways, as comically angry and self-absorbed as ever. Yet, in his search to forgive himself, BoJack is better able to understand (if not completely forgive) his mother for the splintered affection she offered over the years.

His desire for closure proves that BoJack does have the capacity — and the willpower — to become better.

“Every scar tells a story, and every story leaves a scar.”

The framing narrative to describe BoJack’s continual struggle persists throughout the season with all sorts of meta jokes, such as an episode narrated by the characters’ therapists or the identical layout of the set BoJack works on and his home.

BoJack’s lead role in his latest show, “Philbert,” is crucial in creating a distinction between the characters BoJack plays and the person he can be. While BoJack is not a good person, he’s trying to be better — and possibly succeeding.

In previous seasons, “BoJack Horseman” dedicated lone episodes in a season to humorously discuss current social issues, as it did in its episode on mass shooting last season. However, the show goes further this season and touches on sexual harassment, seemingly a commentary on the #MeToo movement in Hollywood. As in the real world, the men of Hollywoo are accused of inappropriate behavior with female co-stars. As BoJack himself becomes one of the accused among his private circles, the show grapples with a questions that supporters of the #MeToo movement are asking themselves in real life as men accused of sexual misconduct (such as comedian Louis C.K.) try to cautiously retake the stage: are we normalizing inappropriate conduct? And when (if ever) do we get to start forgiving these men?

As BoJack’s past returns to haunt him, BoJack himself grapples with forgiveness and whether or not he deserves to treat himself better. Ultimately, BoJack realizes that being exposed by a journalist or confessing his crimes on national television isn’t actually redemption: being committed to being a better person is.

When BoJack loses control, he’s able to admit he does need help. The season’s conclusion, with BoJack taking himself to rehab, contrasts sharply with BoJack’s insistence throughout the show that he doesn’t need to be fixed. Instead of dropping therapy or blowing off AA meetings with Sarah Lynn, BoJack is finally able to admit he needs help and that he deserves that help. While that doesn’t undo his wrongs, it is a real step in the right direction.

“There are no happy endings, because there’s always more show… Until there isn’t.”

Season five, as always, does not truly offer answers or real closure, for the viewers or the characters involved. Perhaps this season is not as shocking or dark as previous seasons, but characters are healing and changing for the better. Maybe this closure is what the show needs — if not necessarily what the audience wants.