Hear from Another World: For Patricia, an American Dream slowly deteriorating 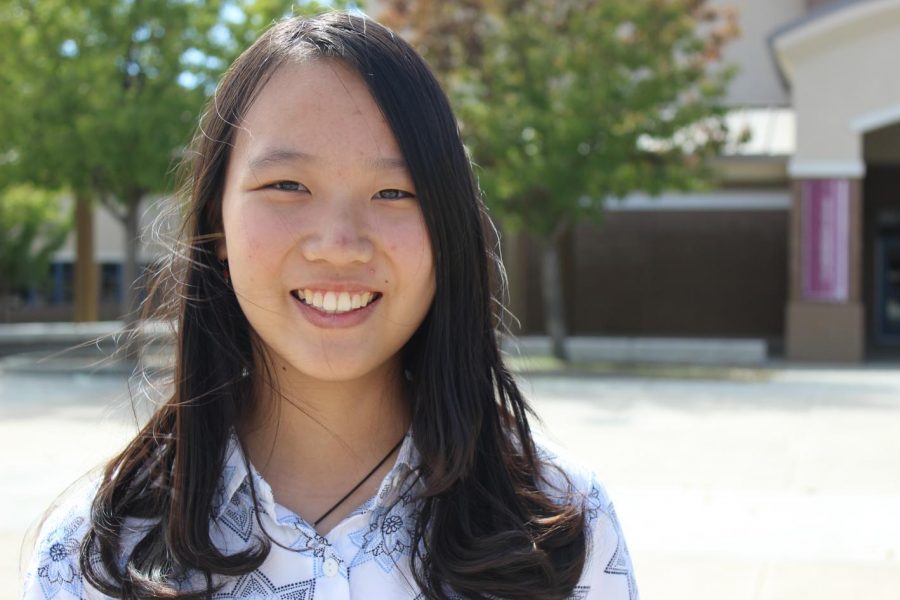 If you glanced at her as she strode down the hallway or saw her laughing with her friends, she might just seem like the average San Ramon teenager. Her black hair is tied back in a ponytail. She cradles two textbooks in her left arm. Her T-shirt reads “The Pride,” printed in a Dougherty blue.

Just like everyone else, she fits in on the outside, a good citizen of her school and society. But on the inside, she faces difficulties that are often cast as nonexistent, especially in a school as affluent and academically proficient as Dougherty.

You might not expect, for example, that her greatest difficulty is speaking English. A first-generation immigrant from Indonesia, Patricia Angelica had indeed grown up with the so-called “global language” in school. But since arriving in the States, the transition from learning the language in a classroom to sustaining real-life conversations has been difficult for her.

“When I talk, it’s messed up … I don’t know, like, I always feel different from other people. Sometimes when I want to talk, I kind of want to cry,” the junior said.

This language barrier constantly interferes with her interactions at school. In classrooms, her teachers sometimes don’t understand her, and in Leadership, forming connections and collaborating on projects are particularly hard for her. Even after completing her first-year SDAIE (Specially Designed Academic Instruction in English) and ELD (English Language Development) courses, she has been struggling in her U.S. History course due to its necessity of understanding complex contextual language.

Even with her troubles in conversation and usage, her Asian accent itself is, in truth, not particularly strong. “They [my teachers and peers] don’t even know that I’m an immigrant or that I moved from another country. They think I speak English well, so I think it [my accent] is fine,” Patricia said.

In her time in America, however, Patricia’s accent has not gone entirely unnoticed. When she volunteered as a teacher assistant at Quail Run Elementary during the summer, she was repeatedly asked by the children that she taught, “why do you sound like that?”

It is this American dichotomy between the alleged acceptance of diverse cultures and the reality of discrimination that persists beyond first-grade classrooms, she says, that is all too apparent in the lives of immigrants, including those of other English language learners at Dougherty and especially of her mother.

On one occasion at a local restaurant, her mother was insulted by a waitress about her pronunciation. “She told me that … this waitress was not speaking like normal. It’s inappropriate and the way to talk to customers is not like that … It was kind of racist,” Patricia said. Although another customer stood up to defend Patricia’s mother and called for the restaurant manager, it is unclear as to how the situation was ultimately resolved.

Patricia and her mother’s perception of America, which has been scarred by personal struggles with racism, has only been worsened by the prevailing national problem of de facto discrimination against other races, including African-Americans and Latinos.

Growing up in Indonesia, Patricia constantly witnessed the widespread mutual hatred between the nation’s Chinese and Muslim peoples. She heard about a great country across the Pacific called America, where the streets were pure and “clean,” where the “laws, the rules are more strict,” and where the people were “straightforward” and appreciative. And throughout her entire childhood, she had assumed that racial divisions like those she had witnessed in Indonesia did not exist in America.

Now, she realizes that those assumptions were wrong.

“We have to, like, accept each other, so I thought America was going to be like that. But in some cases, when I see the news, it’s not as I had thought,” Patricia said.

In fact, the discrimination has been so endemic that she is now considering moving to Europe. Throughout her entire life, she’s constantly had to adapt to new places anyway: San Ramon is her fifth city of residence, after the Indonesian cities of Malang, Tangerang, Jakarta and Balikpapan.

There is another reason why America — and the American dream — no longer attract Patricia. Apart from personal struggles with socializing and racism, her family has not had a stable source of income since arriving in the States during the summer of 2017. With the cost of living in San Ramon being 93 percent higher than the national average, time is running out — and it’s running out fast.

“My mom’s not working right now … She’s trying to find an office job, and she’s applied to a lot of jobs, but she hasn’t got one. They say that my mom doesn’t have experience,” Patricia said.

She and her mother receive no other source of financial assistance, either. Although they had achieved permanent U.S. resident status through the sponsorship of her mother’s siblings, two of whom currently also reside in the Bay Area, Patricia’s family has not relied on their monetary support to remain in San Ramon.

Neither have she and her mother relied on her father for such matters. Patricia’s parents divorced when she was only one year old, and ever since, she and her father have only rarely spoken to each other. They have met each other once, at her fifth grade promotion.

“I don’t know where he is, but I have his contact … Several times he has texted me, but I feel like I don’t want to answer it … because we never really meet, you know, as a parent and daughter,” she said.

Among the people in her community who do support her are several of her favorite teachers. She is deeply appreciative of the English teachers that she has had — Mrs. Yulee Kim (ELD Intermediate), Ms. Trista McCombs (ELD Advanced) and Ms. Hanna Bovberg Love (English 11) — as well as Ms. Carol Quach (SDAIE biology). Together, she says, they nurture a welcoming culture of acceptance and learning.

In terms of her interactions with other students, Patricia has been making friends in her ELD classes since her first day of sophomore year. The junior says that through talking openly about life and grades, she and other immigrant students have become quite “close” and “understanding.”

“It’s not too many people, but we really, like, build our relationships. Even in ELD, some of us stay three years together, or two, so we really know each other. And I think that because we all have different languages, we understand each other’s difficulties,” she said.

In the world away from school and friends, Patricia’s passions range widely across the humanities. Throughout her life she has practiced calligraphy, sung in a choir, engaged in a dance team and always listened to pop music. Since last year, she has been keeping a poetry blog and maintaining her own photography page.

At DVHS, an extracurricular that Patricia participates in is the student club named Southeast Asian Society (SEAS). Although she says that club meetings are relatively infrequent, she has made two or three friends, including Vice President Andrea Muljono, through common Indonesian backgrounds.

More than simply being a SEAS member, she wants to retain her national identity in a school population where a myriad of other ethnicities are represented. She hopes that she does not forget her childhood in Indonesia in the context of most Dougherty students’ experiences as second-generation immigrants.

Long before the beginning of Patricia’s immigration story, her mother graduated from the University of Kansas. A few years later in 2003, after moving back to Indonesia and giving birth to Patricia, she filed a green card application, which was shortly rejected by the U.S. Citizenship and Immigration Services. For a few years, her aspiration of immigrating to the United States was suppressed beneath maternal duties and frequent domestic relocation.

Between her six residences, then, Patricia’s young age was mostly spent between two cities of great contrasts: the crowded Indonesian capital of Jakarta and the rural East Javanese village of Malang. The differences extended beyond the factual conditions of life. People treated one another differently: “they’re more, like, straightforward” in Jakarta, whereas the Malang people “really want to know about how your life is.” Her childhood friends, which were from the latter, relied on jokes and a “sense of humor” to build relationships.

As she kept those friends and met new people, she was, all along, forming her own version of the American dream as the promise of a better education. Her perception and yearning continued to develop as she learned more and more about the red, white and blue throughout middle school.

Finally, during the second semester of ninth grade, her dream became a reality. “It was after school, and my mom was so serious. When I got inside the car, she was like, ‘I need to talk.’ And then we stopped on the side of the street, and she started telling me that we were moving, and I was so excited,” she recalled.

Over her last few months, she met often with her best friends, saddened to leave, yet excited at the prospect of a better life in America. In retrospect, she feels that her actual experience with immigration was not so difficult. “I thought it was going to be really cool, because not all my friends can go to another country for school. In my class of 2020 … I was the only one,” she said.

Despite her initial optimism about the American dream, however, Patricia’s immigration story does not have a happy ending — at least not yet. The differences between her social interactions in Malang and San Ramon have been particularly negative: in the latter, she doesn’t always find the laughter that she grew up around, and she is surprised at many students’ “behavior” and “bad words.”

She affirms that along with the rest of America, Dougherty has clear room for improvement.

“Yesterday in my English class, we were talking about this story … saying that we need to accept each other. People … will never say the bad things, and they always say that we welcome new people, we welcome different backgrounds, or we need to be friendly … but you don’t really do it. You talk about it, but it doesn’t really happen.”

If we had done that, perhaps we would have known sooner that Patricia — along with many other immigrant students — was struggling to simply get along.