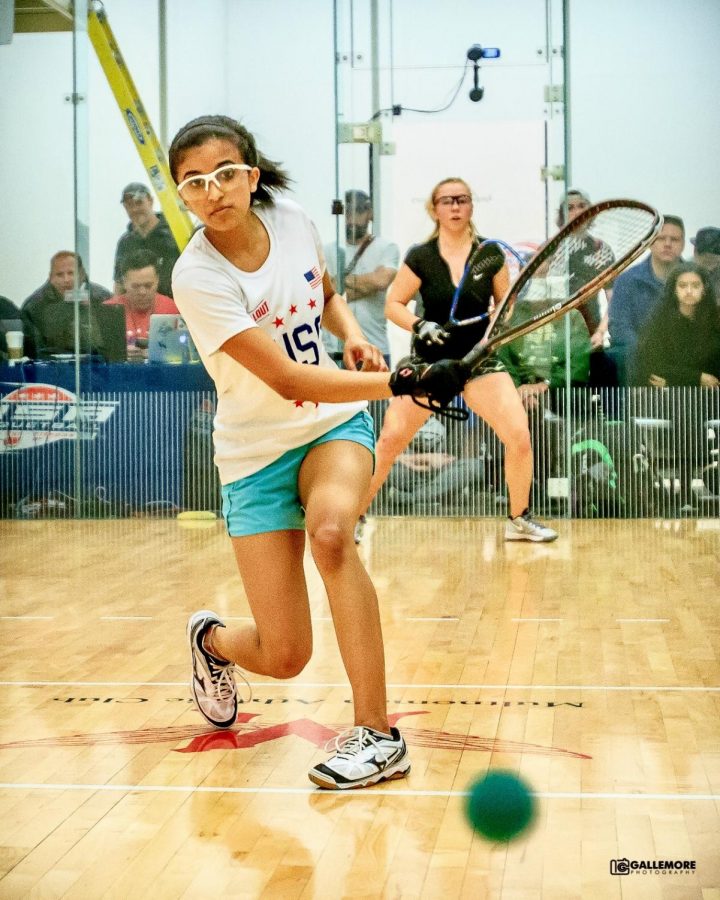 Nikita Chauhan defeats Kaitlyn Boyle in a tie-breaker at the 2018 National High School Racquetball Tournament in Portland, Oregon, advancing to the finals.

Racquetball is an indoor, fast-paced sport, in which players hit a rubber, hollow ball against the wall in an enclosed space with a teardrop-shaped racquet, rallying against their opponents.

According to Chauhan, it’s “one of the only sports where all the muscles in your body are worked out.”

Because Chauhan’s father used to play squash in college, a sport that is somewhat similar to racquetball, Chauhan was inspired to follow in his footsteps.

But when her family moved to San Ramon and joined the gym at Club Sport Pleasanton, they discovered that the gym doesn’t have squash courts — only racquetball courts.

Despite initially thinking racquetball was a “pretty lame sport,” Chauhan tried it out and soon grew to love it because of all the friends she has made in international competitions. She has now been playing for around six years and hasn’t looked back.

“The things that I do for conditioning are actually a huge mixture of things and change all the time. Racquetball is one sport in which the greatest amount of muscles are worked out so I have to make sure I am working out my entire body,” she said.

Outside the gym and on the racquetball court, Chauhan practices six days a week doing specific drills,  such as footwork drills, using the ladder to improve her movement on the court, and practicing her serves “since it’s the most important shot of the game.”

In addition to this training, she also has a coach in Arizona, to whom she sends videos of herself playing and who responds with critiques.

Beyond preparing herself physically for competitions, Chauhan also noted the importance of preparing herself mentally: “I’ll watch my previous matches and see what I could have done better. You know, finding certain words to tell yourself when you’re in an important match that kind of help you stay calm and keep going. To keep your focus and attention and focus on the game.”

As a result of her diligence in training, Chauhan has had numerous accomplishments in racquetball.

Most recently, at the National High School Racquetball Tournament in Portland, Oregon, from Feb. 28 to March 4, Chauhan and her fellow Dougherty juniors Reema Sreenivasan, Mansi Jain and Kashish Pandey brought home 11th place for Dougherty Valley for girls out of all the schools in the nation.

Chauhan is ranked first in the state of California for girls aged 18 and under and has participated in four Junior World Championships as a part of Team USA. At her first one in 2014 in Cali, Colombia, she won a bronze medal. The following year in Santo Domingo, the Dominican Republic, she was a semifinalist. In 2016 in San Luis Patosi, Mexico, she won a bronze in doubles. And in the 2017 tournament in Minnesota, she won a bronze medal in the gold division.

Chauhan has thus far been to six Junior Nationals and competed as a part of the Team USA team for the last four.

Having been on Team USA for the last four years, in 2017, Chauhan had the honor of being chosen from all the players on Team USA to receive the Sportsmanship of the Year award for her good sportsmanship and positive attitude. She credits this as one of her proudest accomplishments and most memorable experiences in the sport.

“Normally they give it to players whose last year it is on the team and I think I was 15 at that time,” she said. “My coach handed it to me, so it felt really rewarding. Smiling on the court and being a good sport really does pay off.”

Although Chauhan has always worked hard to maintain a positive attitude, she admits that she has had to overcome difficult losses and obstacles as an athlete.

“Forgiving yourself when you make a mistake has been one of the hardest things,” she said. “The most difficult [loss] was last year at Junior Nationals. I made it to the finals and I was training really had to defeat my opponent. But I guess I was just having an off day. I don’t mind about losing or not but it’s always tough when you don’t give a tough fight and play your best game because you know you could have played better. But that’s just helped me train to prevent that from happening again.”

Chauhan, as a junior in high school, has also had to surpass the additional obstacle of managing her time — balancing her life as a student and an athlete.

“Honestly I’m not really good at it,” she laughed. “But you just have to prioritize and see what is more important to you. At times, there have been tournaments I’ve missed because of school. Because you know, junior year … It’s difficult as it is. And during tournaments, I would do some of my homework. I think also just also keeping a schedule really helps me. But just having a lot of things to do has helped me get better at time management and understanding what’s more important.”

Highlighting the importance of having the support and understanding of teachers at school, Chauhan also expressed gratitude to several individuals whose support has been formative in her growth as an athlete, including her coach, Horn, and her father, who sparked her interest in racquetball and continues to support her athletic endeavors today.

“I look up to my dad because all the sacrifices he has made in trying to help me become the best player and person I can be on and off the court … My dad is my main coach and takes time off [from] work to be able to coach me at important tournaments” she said.

Since her beginnings as a racquetball athlete, Chauhan’s passion for racquetball has never wavered. But she is dismayed that racquetball doesn’t get as much recognition as many other sports.

“I really don’t know why racquetball doesn’t get enough credit. It’s an Olympic sport. And it’s entered a bid for the 2028 Olympics in L.A. I think it just got unlucky and kind of died down after the 1970s-ish but hopefully it’s popularity is going to start to gain back,” she said.

To promote the sport and students’ interest in it, Chauhan founded and is the president of Dougherty Valley High School’s racquetball club.

In the future, Chauhan aspires to go to a college that has a racquetball team, or would herself like to start one there to continue to help the sport gain recognition.

Consequentially, she is also potentially interested in pursuing a career in the fields of biology or biophysics.

Uncertain about what her future holds, Chauhan hopes to enjoy her time playing racquetball as much as she can and advises young athletes to “appreciate whatever you’re doing and have a good attitude.”

Never taking her talent and opportunities for granted, Chauhan continues to embrace pressure and challenges, stating that “there are many people who would want to be where I am.”

Every day, she lives by tennis player Serena Williams’s quote at the U.S. Open last year: “Pressure is privilege.”