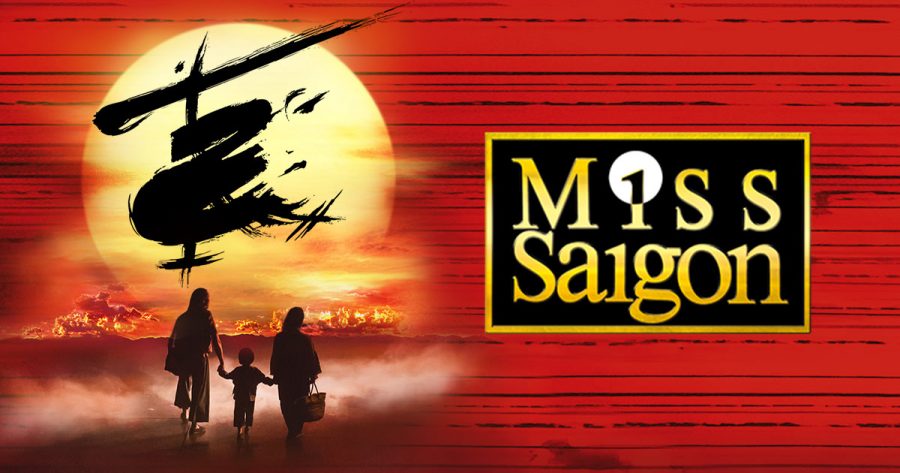 Miss Saigon is a story that breaks barriers through a historical precedent, originally presented on Broadway in 1991 and again in 2014. This must-see musical presents a realistic fiction plot that uses the stage as a means to spread their message of diversity, poverty, privilege and the American dream.

The story follows Vietnamese peasant named Kim and former American G.I sergeant Christopher “Chris” Scott’s love for each other during the end of the Vietnam War. They eventually get married, but separate for a three year period since Chris must return to America. During this period he has a new life back in the States. Back in Vietnam, Kim has a son Tam from her marriage with Chris, and is confident that he will be back for her. Originally unaware of the fact he had a kid, he hurries to Vietnam with his wife and friend to find the child and Kim. This story has very depressing and shocking moments, but the emotion of the music and the stomach-curdling ending makes this musical unique and fascinating.

The main reason why this musical made the list was because of the lack of following, regardless it managed to win multiple Tony Awards. Despite that there has been a controversy surrounding the musical. The musical has been considered “orientalist” or the depiction of  negative connotation of Asian culture it is agreeable that it has a predominantly Western-centric application; however, it does highlight the struggles and repercussions of the Vietnam War.

The soundtrack has a mellow and somewhat depressing feeling, there are low tones and not many fast pace scenes, fitting for the war-stricken plot. The variations between each individual song shows how diverse the same instruments can be used. Previous productions of the musicals involved the orchestra using every last note to express the emotions each character is feeling. The performers were using every last breath and and pushed their performance to new heights. There was a sense of empathy through the orchestra, actors, and audience that is evident through each song.

The cast will be featuring many of the same people who appeared in the 2014 version. Eva Noblezada will be reprising her role of Kim. Noblezada’s stardom came from this musical. Another reprised role is Alistair Brammer, who will be playing Chris in the upcoming adaptation. The only other significant actress is Rachelle Ann Go who played Elizabeth Schuyler in Hamilton. She will also be reprising another role as Gigi, one of Kim’s friends during the beginning of Act 1 of the musical.

War Paint is a musical adaptation of a popular 2004 book written by Lindy Woodhead. It takes place between the 1930’s and the 1960’s, and it follows two divas battling it out in the cosmetology industry to find out which pioneer reigns supreme. Overall, it is an original plot, with an amazing soundtrack, a fantastic cast and hysterical scenes to be shared with everyone.

The plot of “War Paint” is original, it follows two pioneering cosmetologists from the 30s to the 60s: Helena Rubinstein and Elizabeth Arden. In an industry dominated by men, this story breaks gender barriers by showing how these women paved the way for females in the beauty industry. Each have their own unique style of fashion and beauty: Arden is very pink and flashy, wanting to represent high-society life. Rubinstein, on the other hand, is dramatic and exotic and goes for a more simplistic look. Both have their own troubles with personal lives, lawsuits and the Great Depression, which happens during the span of the musical. Other than that, their rivalry is one of a kind; even though they never met, they are aware of each other’s existence, displaying how competition can drive people further. The bond that they share is also unique because points of the musical show how they even suffer together. This, coupled with the acting that went into perfecting the roles, definitely makes it a story worth telling.

The lighting and how it spans from the linear stage between Elizabeth Arden and Helena Rubinstein is elegant and visually appealing. The costumes are rich in vibrant colors, ranging from flowing bright pink dresses to slim dark blue dress suits that exaggerate designs on the top portion of the dress. The musical makes the effort to juxtapose the two characters through whatever means possible and the difference in costumes achieves that purpose. The sets were simple with a couple of furniture items differentiating between the styles of both characters. The set also manages to encompass the scenes in which everything was staged in a way that screams “less is more,” the minimal but meaningful props like Arden’s pink office or bed characterizing her love for color and the sophisticated life. Each element that went into the production was executed beautifully.

The cast for this musical is filled with two main powerhouses: Patti LuPone and Christine Ebersole, both two-time Tony award winners, play the main roles of Helena Rubinstein and Elizabeth Arden respectively. Both of these actresses bring out the diva roles they were meant to play. They were the most notable cast members playing the most notable roles, and there could not be better people to fit each of the characters than them.

There was some historical inaccuracy near the end, but this was to pose a deep and thought-provoking question. Near the end of the musical, they finally meet (which never actually happened) at a conference for women in business. They find each other at the dressing room, and they discuss the industry they built from scratch. The discussion follows whether the industry they built was good for women, whether it provoked stigma of beauty standards or self-confidence. This scene is what really leaves the audience thinking about what legacy has been left.

This musical’s message shown through a strong cast, set and music show the struggle of two women in a man-dominated industry and how they influenced the world through something as simple as skin care products.

Both of these musicals are only two of the many new Broadway musicals coming in the spring of 2017. These two are unique because of their individual way rebellions against oppressive societal norms.