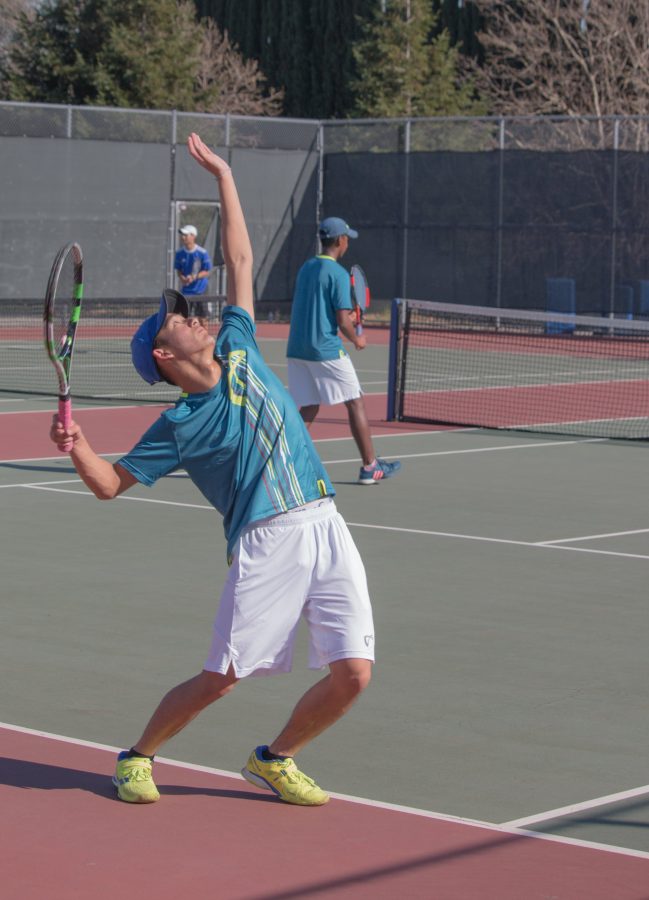 After a tense, brutal matchup, Dougherty’s Men’s Tennis team shot down the Foothill Falcons 6-3 on March 14, continuing their 46-game winning streak and setting up the team for continued dominance through the rest of the season.

DV’s formidable Men’s Tennis team traded up from the Diablo Foothill Athletic League (DFAL) to the East Bay Athletic League (EBAL) in the 2016-17 school year, joining the other three SRVUSD schools and having to face a whole new slate of opponents. In their eyes, Foothill was one of the most intimidating of their new challengers.

Going into the game, team captain Shawn Jiang’s anxiety tempered some of the team’s usual confidence.

“I feel nervous,” Jiang, currently a junior at DV, stated. “But we can’t lose a league match.”

At the outset of the first-rank singles matchup, between Wildcat Kevin Ma and Falcon Akshay Patel, the intense heat made their rapport sluggish, as the players visibly faltered under the conditions. A series of false starts marred Ma’s serves, and most of their rallies — when they did happen — were fleeting. Nonetheless, Ma eked out a 1-0 advantage.

But their rallies ramped up over time in both size and speed as the set progressed. Excellent serves nabbed Patel a game point, evening out the score to 1-1, but from here, Ma began to excel. His mobility allowed him to reflect most of what Patel threw at him, and his success was compounded by Patel’s many just-out-of-bounds longshots. Ma racked up game points quickly and efficiently, while Patel struggled. In a particularly bruising play, Patel smartly sent out a drop shot while Ma hovered near the back, but to no avail. Ma leapt and volleyed the ball with brutal force, to which Patel replied with another soft drop shot — and Ma once again smashed the ball out of Patel’s reach in an amazing double-volley. Ma won the set handily, 6-1.

The second-rank singles matchup, between DV’s Shawn Jiang and Foothill’s Kyle Thompson, raged on with equal fervor. Unlike Ma and Patel, their rallies were not lightning-fast, but longer and more deliberate, allowing for a more moderately-paced matchup. Jiang similarly dominated, even as Thompson threw difficult-to-reach, well-placed lobs at him. Thompson’s strategy was devastating for a little while — with several impossibly precise deep shots right at the corner of the backcourt, which Jiang struggled to deal with. That is, until things snapped into focus for Jiang with a stunning counter-lob out of Thompson’s reach that won him a game point. From there, he easily took the set 6-2.

Jiang hit the ground running in the second set, rapidly gathering game points — he was 3-0 within minutes — as he countered Thompson’s now quicker and shorter shots. He did have to concede one game point as Thompson staged a minor comeback, winning a game point with an efficient, brutally fast downward smash — but Jiang was able to maintain his lead, so much so that tensions for his opponent boiled over as Thompson, at one point, threw down his racket in frustration. Jiang took the set 6-1, ultimately winning his matchup with Thompson.

“It was very hot — I wasn’t ready for it, I was feeling heatstroke,” Jiang said. “But I toughed it out.”

Jiang chalked up his earlier nervousness to routine hesitation. “You’re always a little nervous. You don’t want to underestimate your opponent.”

Though it was becoming clear through the success of other matchups that Dougherty would prevail, the tension that marked Jiang’s matchup bled into Ma’s long-winded second set with Patel. Gone was Ma’s easy dominance — Patel began to develop a finesse for fast and deep shots that were hard to return, while Ma began to overshoot several shots just outside of court bounds. A killer smash by Patel signified his success, as he squeaked out a 3-2 lead. But another lob, counter-lob exchange — like the one between Jiang and Thompson — turned the tide in Ma’s favor. From there, Ma’s characteristically fast volleys came into play, handily shooting down many of the Falcon’s best shots. Though there was a definite sluggishness to the second set as they tired, Ma and Patel played with a silent fury that culminated in many thunderously fast exchanges. Most arresting was an intense rally between Patel and Ma that culminated in Ma bending over backwards to smash the ball angularly out of Patel’s safe zone. The ploy worked, and from there, Ma’s 6-3 victory was crystallized, allowing him to ultimately win his matchup, as well.

Regardless, he seemed unfazed by the matchup. “It was… okay. I can’t think of a better word to describe it.”

In the end, DV ended up decisively shooting down the Falcons from their perch, continuing the winning streak they’ve had going for three and a half years. Coach Akshay Arora owes it to Dougherty’s methodical approach.

“Foothill’s a talented team — you can’t underestimate an opponent,” he said. “But there’s just a formula [for success] — and it played out.”

The Wildcats’ next game will be at DV on March 30, against Monte Vista High School.