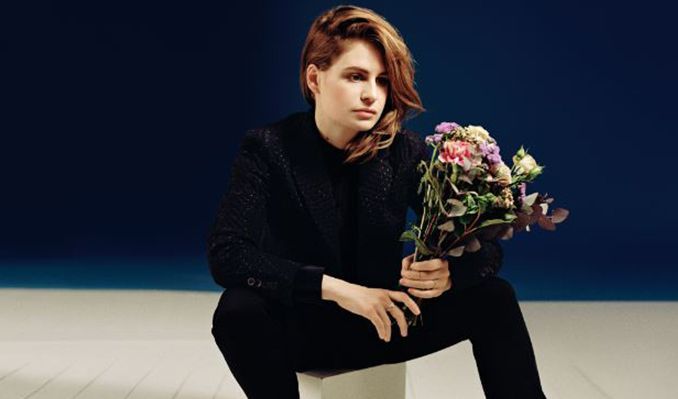 Album of the Month: “Christine and the Queens” (self-titled)
Héloïse Letissier is post-gender, perhaps, but not post-emotion on her evocative debut LP as Christine and the Queens. Twelve searing synthpop tracks glide across the ears with power and grace, partially delivered in French, presenting her queer identity, and that of many others, with the nuance it deserves. Letissier herself still identifies as female but not quite feminine; on stunning opener “iT”, she declares, “I’m a man now, and I won’t let you steal it,” asserting her identity over a piano played as though producing its last tones and intricately syncopated synths and drum machines. Her conflicts become universal without leaving her slice of the gender-and-sexuality spectrum: “Tilted” depicts a beautiful, harmonious relationship through the lens of both partners’ specific gender identities on top of a rough yet pleasant synth melody; “Half Ladies” explores the tensions in more complicated gender identities over cleansing pianos, hand-clap rhythm, and exuberant horns; “Here” is delivered half in French, but a translator is not necessary to understand the crisis of identity, which occurs when gender identity morphs, that Letissier lays bare over tense organ and mounting strings; and “Narcissus Is Back” takes down a selfish lover savagely, over a killer and incredibly danceable bass line interjected with loud blasts of synth heaven.
Letissier employs piano, strings, occasional organ, and a variety of synths to make the sonic soundscape which evokes such powerful response in addition to the great lyrical storytelling. One of the keys to the instrumental success is her careful use of timbre; synth tones are almost always effortlessly picked to perfection, pianos are tuned and pitched and positioned just to fit a given song’s emotional palette, strings are compressed and mixed for alternate anger and catharsis–but it’s Letissier’s knack for fantastic, intricate rhythms which completely sets her apart from the competition. Some of these drum machine patterns feel worthy of a virtuoso like John Stanier to be brought to life, but they do more than enough on their own. Again, she employs different percussive timbres to heighten the already-inspired patterns, often just handclaps and snaps woven together to memorably propulsive heights. Just as much as listeners will hum the incredibly sticky melodies, they may too find it impossible not to tap along on their desk.
The strengths of the album are epitomized in the stunning “Jonathan”, featuring everyone’s favorite destroyer of homophobia, Perfume Genius. (He’s the one who lit the Internet on fire last year by mocking prejudice into submission with one vocal refrain: “No family is safe / when I sashay.”) A simple song of yearning and people displaced by prejudice, “Jonathan” depicts a relationship crumbling into pieces because one member internalizes bigotry against their own queer identity, and is ashamed of the relationship she has. The duet is somber and sung with fervorous tension set over perfectly ached and building strings. The tale is as old as time, but Letissier uses her own idiosyncratic identity as synecdoche for all those falling along the spectrum of gender and sexuality, making “Jonathan” feel simultaneously personal and quintessential, much like the rest of this self-titled marvel.
Other Notable Releases:
Marianas Trench’s “Astoria”: Yet another benchmark for pop music from this talented Canadian quartet, Marianas Trench’s fourth LP is an ambitious concept album that pulls it off. Josh Ramsay’s impassioned vocals, frequently becoming screams, elevate a brilliantly mixed range of guitars, synths, and drums. It creates an epic sense of bliss which feels earned, and it never runs out of melody in its 60-minute runtime the way that nearly all modern music, indie or otherwise, does.
Should have been a single: “Wildfire” builds a wall of pianos, echoing drums, nostalgic synths, staccato violin, and an impassioned performance from Ramsay himself to make for a truly stunning and epic pop tune.

Demi Lovato’s “Confident”: Lovato violently wrestles the popstar throne from Selena and Miley with a fifth LP which exudes its title. Synths, piano, actual drums, and — yes! —roaring electric guitar make for a colorful and exciting release that sticks in the brain for days. Demi’s passionate, soaring voice — multitracked to perfection — is icing on the cake.
Should have been a single: Heartfelt closer “Father” shocks with its nuance and grandiose mix of gospel choir and piano which reverberates with emotion indescribable, all elevated by an emotional performance from Lovato herself.

Selena Gomez’s “Revival”: Midtempo pop, consisting of synth lines and drum machine patterns so familiar that the album might as well be credited to Lorde, Max Martin, Jamie xx, and Diplo. Gomez’s strong yet dispassionate vocals are pleasant, but the piano which occasionally creeps into the mix always steals the show—too bad it’s rarely present.
Should have been a single: Title track “Revival” actually shows hints of originality, with several cathartic synth flourishes bouncing around a spacious mix, making for an engaging and uplifting pop song.

Neon Indian’s “VEGA INTL. Night School”: Trading chillwave for straight synthpop, Neon Indian’s third LP is their most direct yet. Alan Palomo’s seductive croons are often drowned-out by synth melodies that are alternately gripping and lost in their own excessive layering. Unfortunately, the warbling synths and samples start blend together, especially in the second half.
Should have been a single: Opening one-minute instrumental “Hit Parade” accomplishes a lot in its short runtime, effortlessly combining boiling synths and samples to make an unforgettable, short synth jam.

Deerhunter’s “Fading Frontier”: Deerhunter switches up their sound yet again, forgoing the noise of “Microcastle” and “Halcyon Digest” for small, simple psych-pop songs populated with honeyed synths, acoustic and electric guitar, expert drumming, and a serious emotional punch.
Should have been a single: Extended ballad “Leather and Wood” overwhelms with its beauty; a slow-moving piano which is slowly overtaken by distortion and noise underscores the emotionally evocative vocals and lyrics.

Beach House’s “Thank Your Lucky Stars”: Another month, another… Beach House album? Yes, the dream pop duo has dropped their second LP in two months (and sixth overall) which hearkens back to their late-2000s sound, with a reverb-soaked mix of warm guitar, sweet synths, and barely-there drum machines. Victoria Legrand’s lyrics, interestingly, lean political this time around.
Should have been a single: Longer cut “One Thing” for including some surprising abrasion in its guitar and slowly-building wall of synths which increases in beauty, just like Legrand’s impassioned performance.

Deafheaven’s “New Bermuda”: The most hated band of metal purists everywhere, Deafheaven continues to blend pleasant prog-rock, abrasive black metal, and sweet folk tunes haphazardly. Expect a variety of riffs, blast beats, strangely dispassionate shrieks, and occasionally pleasant synth lead or acoustic guitar punctuating the mix. Still, in going darker than their sun-kissed “Sunbather”, something has gone missing: originality.
Should have been a single: Every song on this LP is at least eight minutes, but “Baby Blue” is an exciting instrumental odyssey, jumping between beautiful melodies and chugging riffs, courtesy of some excellent guitar-playing by Kerry McCoy.

Joanna Newsom’s “Divers”: Another set of wonderful harp and piano tunes which captivate with great lyrical storytelling and even greater melodic composition. Newsom adds in a few surprises when it comes to instrumentation this time around, including even some buzzing electric guitar.
Should have been a single: Closer “Time, As A Symptom” builds to a great string-affected climax in its five-minute runtime and hits with major emotional power.

The Game’s “The Documentary 2/2.5”: Two hours of nostalgic gangsta rap featuring verses of inconsistent quality, soulful samples, and loads of great features. It’s a monster, but there are rewards to be found.
Should have been a single: Deep cut “New, York, New York” strikes with powerhouse commentary on religion and prejudice with an evocative soul sample and a great drum beat which builds to a fantastic zenith.

EL VY’s “Return to the Moon”: Funky, fun indie rock with a witty edge. Expect eclectically mixed guitars, bass, punchy drums, and the occasional left-field organ supplemented by a varied mix of synth tones. Fans of the two bands which combine to make EL VY, The National and Menomena, will find much to love here.
Should have been a single: “It’s a Game” combines gently plucked acoustic guitar, warmly tuned piano and Matt Berninger’s soft crooning to make for a potently subversive love song.

Beach Slang’s “The Things We Do to Find People Who Feel Like Us”: Punk rock which wears its heart on its sleeve, Beach Slang’s debut LP refreshingly embraces feeling and melody, casting aside the nihilism often associated with punk music for a quick, less-than-half-hour emotional journey. If only the middling riffs and interplay possessed more potency.
Should have been a single: “Young and Alive” encapsulates its title with a churning, sticky guitar riff and vocal refrain helped along by a great performance from frontman James Alex.

The Neighbourhood’s “Wiped Out”: Epic and enveloping until it isn’t, The Neighbourhood’s hazy mix of RnB and indie rock comes together again with mixed results. The atmosphere is potent but unmemorable, and the lyrics border on inane, but some great guitar lines and even greater bass lines make some tracks enjoyable.
Should have been a single: aptly-titled “Single” meshes softly strummed acoustic guitar with just enough reverb and spaced out backing vocals to build slowly to a genuinely fantastic bridge which, unlike most of this LP, sticks in the brain for days after listening.

Escort’s “Animal Nature”: Disco-revivalists Escort craft incredibly catchy, incredibly danceable dance tracks bolstered by great production and even better vocals. House-styled piano, eclectic synths, funky guitar, and metronomic drums craft a bubblefunk paradise. It may not be deep or experimental, but it is excellent escapism.
Should have been a single: a tour-de-force cover of the already-brilliant “Actor Out of Work” (originally by St. Vincent) elevates the cut from grimey indie rock diss track to anthemic heights.