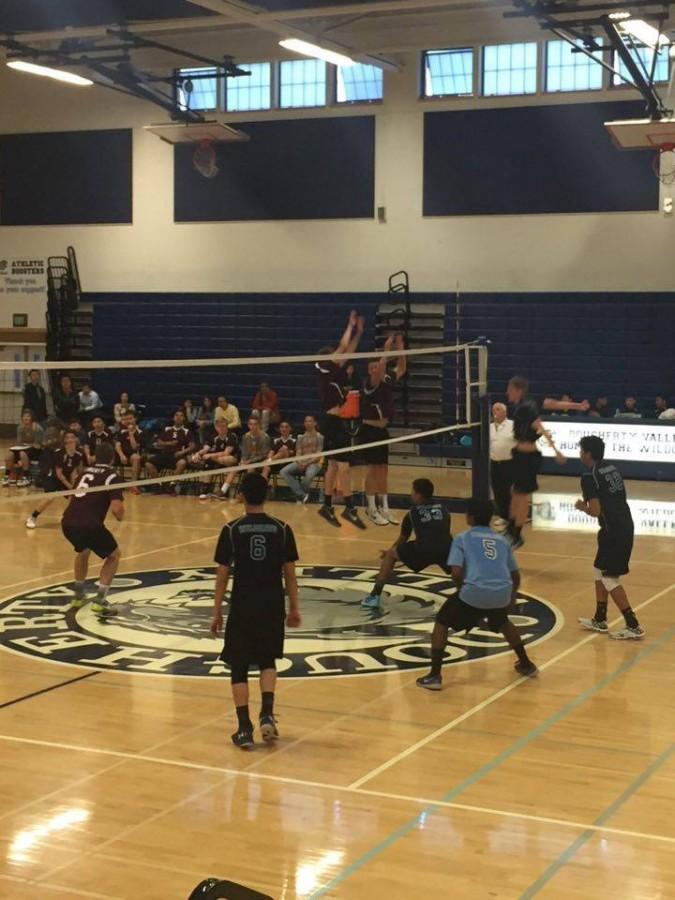 Senior Thomas Nelson led the scoring with multiple kills in the first set, putting pressure on the Lions’ line up and giving the Wildcats an early lead of 10-6 within the first ten minutes of the game.

Liberty attempted to combat the Wildcats’ strategic plays, as exemplified by how senior Jonathan Cavote’s chose where to tip the ball as to prevent Liberty’s defense from being able to assist the setter.

And every time the Lions took back the serve, they were met again with the determined force of the Wildcats. With Liberty stuck in what one could describe as a state of purgatory, Liberty had to call a time out to regroup their team.

Nonetheless, the Wildcats continued to rapidly widen the gap with at the very least, a four point cushion, due to a series of kills from Nelson, Cavote and sophomore Sankalp Panagrahi. The Lions were cut short at 25-15, thus moving the game onto its second set.

Not surprisingly, the second set began with kills from first Nelson and then Cavote. The Lions continued to show a lack of communication, and thus were unable to bounce ball. With Dougherty in the lead, the score read 11-2 as Liberty called for another time out.

This was the perfect opportunity for the Wildcats to sub in “guys who don’t get to play a lot [so they can] get some experience,” according to Coach Ray Montalvo.

Senior Andrew Um added that because they were “playing a weaker team, … [they] were able to get benched players some time to play.”

Um, who has been on varsity since sophomore year, notes how interesting it was to see benched players get a lot of court time, especially because he was once in that position himself.

However, a mixed sentiment fell over the crowd as Liberty caught up to Dougherty, who fell victim to the very same virus that infected Liberty’s ability to play efficiently as a team: lack of communication. Suddenly, both teams were tied 19 all, and the state of alarm the Wildcats were in did not help calm the situation.

When asked how important team chemistry is in volleyball, freshman Walter Guo, who plays outside, responded, “it’s really important.”

Um emphasized its importance and added how “[volleyball] is a six-man sport. It’s not one of those sports [in which] one person can just take over and basically run the game. Volleyball is definitely a team sport [in which] if everyone’s not in it, nobody’s in it.”

Luckily, with some guidance from Nelson and Cavote, who both happen to be team captains, the Wildcats came out with the win in the end at 25-22.

In the third set, the Lions began to stabilize their team chemistry, evidenced by their ability to consistently keep up with the Wildcats. The gap between the two teams was only a couple of points, but those couple of points taunted Liberty, as the Wildcats put up a strong defense against Liberty’s offense.

After two aces from sophomore Nitesh Perumal, Liberty called for another time out in an attempt to regroup.

Nonetheless, Dougherty’s offense continued to dominate, with Guo’s kills prompting chants from his fellow teammates, as Liberty fell short due to the accumulation of small mistakes.

The third set ended 25-19, resulting in an overall win for Dougherty.

The Lions were ultimately unable to conquer, as the Wildcats continued to reign supreme.

When asked for a final comment regarding how the Wildcats played, Coach Montalvo replied, “We came hard tonight. All in all, we played really well.”

Dougherty hopes to continue that streak, as the Wildcats play Mission San Jose on Tuesday, April 19.