The Wildcat Tribune • May 5, 2015 • https://thewildcattribune.com/1532/showcase/lady-wildcats-softball-crushes-in-las-lomas-and-dublin-games/ 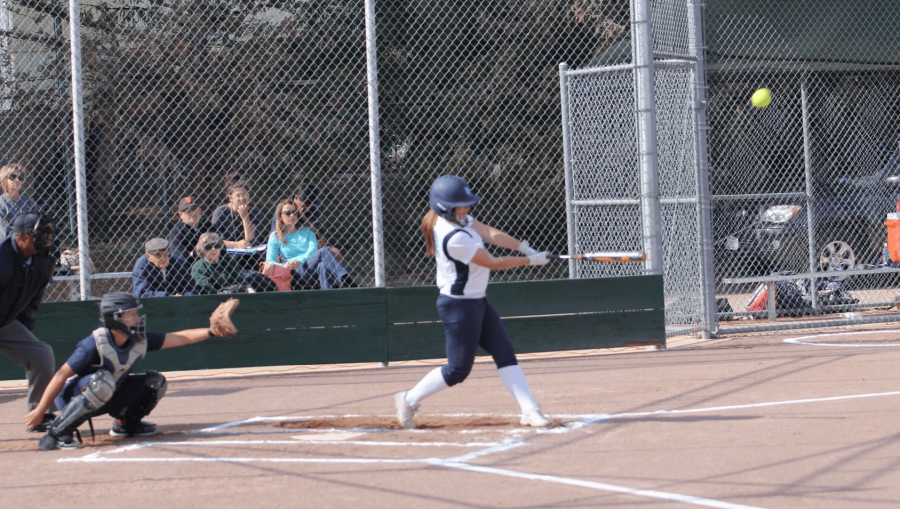 Dougherty Valley’s varsity softball humiliated Las Lomas in the second mercy ruling this season on Apr.16, with an outrageous score of 10-0, following that game with a crushing 11-0 win over the Dublin Gaels on Apr. 21.

The Wildcats got down to business quickly against Las Lomas. The top of the first inning ended gracefully in three swift strikeouts.

However, Las Lomas retaliated, as the two teams battled for control of the early game; the inning ended in a standoff, as the scoreboard remained empty.

Then everything changed as the second inning started when Dougherty scored four runs in a row.

Smart base stealing and solid hitting all around defeated Las Lomas’ defense, as Las Lomas struggled to even progress in the inning.

“We just had to go in and win early,” confirmed Coach Vince Felix.

Senior pitcher Carolyn Lee kept the Knights in check. She pitched 27 strikeouts in the game alone, only allowing one hit, pinning Las Lomas down.

Las Lomas’ pitching could not match up. Numerous innings of walks and fly balls allowed the Wildcats to sneak in an extra run in the fourth inning, raising the score 5-0.

But the Wildcats could not stop there.

“The last inning made it for us,” said Coach Felix.  “Gena Galeano‘s hit was game winning in the fifth and that’s what had us set.”

Despite a grand lead of 5-0, the Wildcats continued. In the fifth inning, Dougherty doubled their score, scoring an additional five runs. The game was stopped by the end of the second inning due to a mercy ruling, with official softball rules preventing the game from continuing further.

Next up for the Wildcats was the Dublin Gaels, struggling with a 3-11 season.  The lady Wildcats were already pumped before the game even started.

“We had a good game last year — we’re looking to continue our winning streak,” Lee said.

While the game started slowly, remaining scoreless until the second inning, it was senior Kaitlin Scheid’s double and sophomore Alyssa Steiger’s two run home run that changed the dynamics of the game.

“That two-run homer was huge,” Coach Felix said.  “It took us a few innings to adjust [to Dublin’s slow pitching] but once we saw the pace, we felt more comfortable.”

Entering the third inning 2-0, the Wildcats scored again, raising the score 3-0.  But it was Lee’s pitching that dominated the next three innings.  Strikeout after strikeout, Lee just could not be stopped, and the Gaels could not even get on base.

“I made good adjustments [in the third inning] to pull out a win,” she said.  “I started throwing the ball hard and worked on my release point.”

The Wildcats took the game in the sixth inning, scoring eight runs, even batting around to the lead off hitter.

It started with sophomore Audrey Miller’s line drive up the first base line, followed by notable singles from junior Kelsey Nelson, junior Rachel Ingram and Scheid, and a double from Steiger.

Several infield errors and sloppy defense from the Gaels defense didn’t help either, as the inning finally ended 11-0.

Coach Felix hopes the girls maintain their great attitude but wants to focus on winning “every inning”, adjusting earlier in the game to ensure an overall win.

Miller feels the team can continue to improve on “mental errors”, but was overall very pleased with the team’s performance.

“We showed Dublin who we are,” Miller said.  “We crushed them.”

Overall, the games were a massive confidence boost for the Wildcats, who came off a four game losing streak.  The morale for the team is at a new high, as they next prepare to face off against Acalanes on May 8 and hope to make the playoffs.