“Spider-Man: No Way Home” weaves together a web of characters and backstories 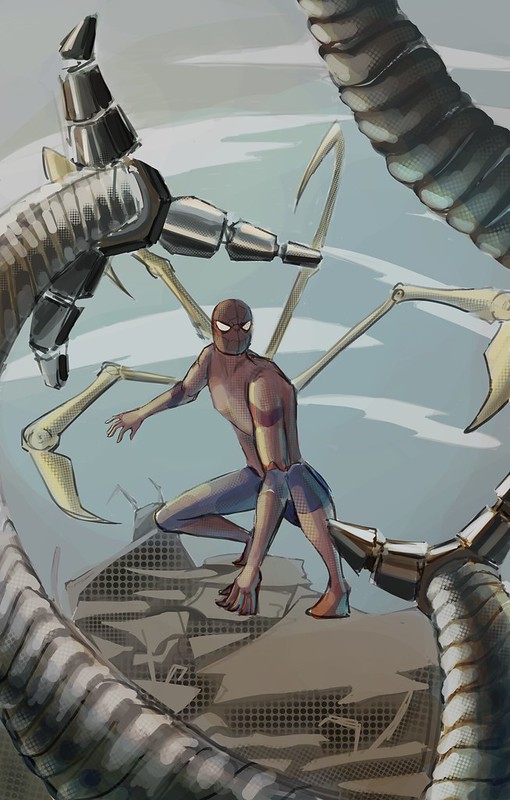 Spiderman's No Way Home is a satisfying blockbuster coupled with nostalgia.

The story follows Peter Parker (Tom Holland) right after Quentin Beck (Jake Gyllenhaal), also named Mysterio, frames him for murder and lets the world know the true identity of the man behind the mask from the previous movie, “Spider-Man: Far from Home.” Parker’s life is left in chaos as he’s ostracized at school and swarmed by the media.

The film immediately gains momentum, as Peter comes to the conclusion that Dr. Stephen Strange (Benedict Cumberbatch) is the only one who may be able to revert his situation back to normal, using a spell. The story continues to ramp up velocity as dangerous supervillains leak out from their dimensions to wreak havoc in Parker’s life.

The villains bring a darker angle to the story, and the Green Goblin (William Dafoe) stands out from the rest. His fight with Parker in Parker’s apartment building is especially intense, as Parker is viciously thrown through multiple building levels. As well as providing a cinematically impressive stunt scene, the Green Goblin and other villains make Peter doubt the integrity of what he is doing. The Green Goblin also helps guide the film to explore the themes that overlay each Spider-Man movie–taking responsibility that comes with power.

The film does a great job humanizing Parker’s character, as he and his friends struggle with high school and college acceptances, unlike in many other Marvel films where the main focus is the character’s heroic arc.

Another redeeming factor that the movie has in terms of its villains is its upgraded wardrobe. All of the villains and even Parker are shown in revamped costumes, the most notable being Electro (Jamie Foxx), decked out in the more comic book-accurate outfit, with yellow lightning swirling around him as opposed to the pure blue electricity in “The Amazing Spider-Man 2.”

Netizens were ecstatic to find that their theories were indeed correct —  Tobey Maguire (“Spider-Man”) and Andrew Garfield (“The Amazing Spider-Man”) are in the movie, reprising their roles as Peter Parker, teaming up with Holland’s Peter Parker to take down their respective villains. The moment each Spider-Man whips off his mask to reveal Garfield and Maguire results in a cacophony of screams and whistles from fans, and is sure to be stunning regardless of whether you’ve watched their respective Spider-Man movies.

The Spider-Man trio has clear chemistry and a brotherlike bond, which only adds to the movie’s overall charm. This bond shines through especially in the scene where they comfort Holland after Aunt May dies, teaching him that being Spider-Man comes with pain, no matter what dimension he’s in.

Although this trio brings nostalgia for many long-time Spider-Man fans, their inclusion seems more geared towards fan service than any actual development towards a captivating plot itself. The storyline and main conflict are largely based on the reappearances of the past Spider-Mans and villains; without them, the plot wouldn’t attract the audience’s attention as much. Much of the hype is attributed to the number of cameos in this movie.

“No Way Home” capitalizes on its emotional scenes, creating a dark undertone that viewers didn’t see in “Homecoming” and “Far From Home.” This is explicitly visible when we see an anger-stricken Parker (Holland) brutally strike the Green Goblin in hopes that he can avenge his aunt’s death. Fans can’t help but feel a pang of sadness as they see their friendly neighborhood Spider-Man turn into a more sinister version of himself.

Building on emotional redemption, one of the highlights of the movie has to be when MJ (Zendaya) falls off the building, and none other than Garfield’s Peter Parker soars down to save her, giving him closure that he saved MJ at last. Knowing that he failed to save his MJ (Emma Stone) in his respective film “The Amazing Spider-Man 2,” the replicated scene is sure to leave no dry eyes in the theater.

However, for every gut-wrenching scene, “No Way Home” follows the same successful algorithm that the other movies used for humor. The Spider-Man trio’s initial confusion for which Parker is which and Ned, Parker’s friend, and MJ’s interactions with the villains are sure to bring laughter and clear the air.

The entirety of the film leads up to one large catastrophic fight with the three Peter Parkers (Holland, Maguire and Garfield) lined up against the many villains across multiple universes. After seeing these villains fight one on one with their Peter Parker’s in previous movies, it was a satisfying and hair-raising experience to see different yet the same worlds collide. It was truly the endgame of Peter Parker’s universe alone.

This fight scene alone is arguably one of the most fervent ones yet. With technology today being so advanced, and with most of the film’s concepts being artificial, the producers and animators did a great job of weaving together epic filming angles and computer-animated graphics to make it as realistic as it gets.

Though this film was touted to be the most serious, as it was supposed to conclude Tom Holland’s trilogy playing Spider-Man, it brought a multitude of different emotions to the audience from beginning to end. Ranging from the intense fight sequences that kept the audience at the edge of their seats, to the chaotic brotherly-like behavior between the three Parkers interacting, the audience reacted with comical laughs as well as heart-wrenching tears.

In short, “No Way Home” is well worth the hype, giving fans everything they wanted and more —  a gripping storyline, the reintroduction of familiar faces, hilarious jokes and Zendaya. We see the evolution of Peter Parker as both a superhero and teenager, learning from the other Peter Parkers about what being Spider-Man means.