Disentangle Asians from the media’s delusions 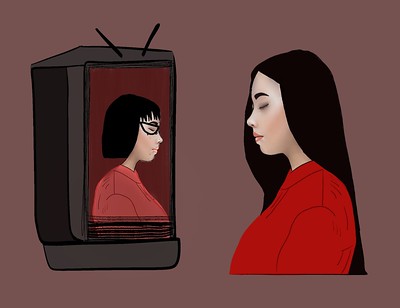 Poor representation of Asian characters in the media reflects terribly on the “real” Asians, concurrently feeding dangerous perceptions to the public.

People often protest that the media does not include enough diverse representation, especially of Asian women. But growing up female and Asian, we could argue that we DID, in fact, have representation in the media. We had Tiffany from “Bunk’d,” Cho Chang from the “Harry Potter” franchise and Lilly from “Pitch Perfect.”

But Tiffany was a violin prodigy with smothering “tiger parents” (who kicked her out for losing a spelling bee), Cho Chang was the intelligent Ravenclaw who only served to further the development of male characters and Lilly was so demure that she couldn’t speak above a whisper. Yes, we had representation, but everyone who represented us had stereotypical qualities that solely defined their character, reducing them to some caricature in which we could scarcely recognize ourselves in.

While distorted portrayals have planted outrage in ourselves (because no, we aren’t disowned as punishments), at least we knew to be outraged because we knew the truth. However, not everyone is exposed to the indicators of misrepresentation. The media must depict nuanced and realistic characters because nobody is exempt from consuming media.

It is easier to believe that Hollywood is becoming more diverse with the magnitude of Asian representation in both film and television compared to the decades prior. For context, Asians represent about 7% of the total U.S. population, and comparatively, 5% of Asians in all film roles is not a terrible proportion, statistically. However, only 1-2% of Asians have lead roles, and the rest are one-dimensional side characters who are too smart, too meek and too acne-prone. They are never just “normal,” but forced to depict a preconceived cliche.

These characters are hardly ever fleshed out or reflect the realistic nature of being human, much less Asian. Instead, they each have a generic “Asian” quality as their defining trait and are only present to give the film a pretense of diversity, when in reality they are only allowing dangerous prejudices to fester.

Kayla Suhaili, a previous DVHS student, has been acting for 12 years and is currently in post-production of her own short film.

“I’ve heard, ‘I like you because you’re Asian and there’s a really great market for Asians’… but you should be wanted for your talent and not for what your race can bring to satisfy social wants,” Suhaili said.

Only seeing yourself represented in overused molds is not representation. Seeing the shape of your eyes, the color of your skin or even the food you eat on the screen can be validating, but when these all so familiar aspects of yourself are paired with a grossly exaggerated misconception of what society thinks you should be, it’s demeaning. It is inevitable to hear the phrase, “Aren’t Asians supposed to be smart?” at some point, or something equally ignorant tossed around satirically. “I did better than you on the test. Aren’t you supposed to be Asian?”

But can we blame them? The “smart” trope has been immortalized as the defining characteristic of Asians to the point where the stereotype seems habitual. Eric (Justin Chon), a character in Stephenie Meyer’s “Twilight” franchise, is described as a “gangly boy with skin problems and hair black as an oil slick… He looked like the overly helpful, chess club type.” That description alone was enough for an Asian actor to be cast for the role.

However, Asian actresses struggle against another realm of hindrances.

The “market for Asians” Suhaili described has contributed to the history of fetishization Asian women experience in films. Another trope is painted: an exotic variant to the typical “nerd” stereotype. Here, Asian women are depicted not only as quiet, but as submissive and subservient.

“[Asian women] are put into a box for performing arts. It’s either “Miss Saigon” or an Asian person has to play Éponine in “Les Misérables,”” senior Gabby Ocampo said, an Asian actress at DVHS.

The critically acclaimed musical “Miss Saigon” tells the story of an Asian prostitute and an American soldier who buys her freedom from a brothel. While the white savior complex is overwhelmingly evident, the hypersexualization of Asian culture saturates the entire story. It is stories like these that perpetuate the misconceptions that led to the Atlanta spa shooting earlier this March, taking eight lives, six of whom were Asian women. Even though the perpetrator claimed to have acted from a sex addiction and not because of the victims’ race, it is clear that because of the history of frequent Asian objectification, any other motive besides a racial one is dubious at best.

As Asians increasingly occupy the news headlines depicting another gruesome hate attack during this COVID era, one could question how seeing Asians in films can be remotely important (people are dying and you worry about movies?). But these attacks exemplify the very reason why we must demand better representation.

“Movies matter because we are all constantly consuming media…Whether we like it or not, we are surrounded by film, so representation, and good representation is so important,” said Nadia Hoffmann, an aspiring filmmaker.

When audiences consume media portraying distinct characteristics for a marginalized community, viewers will hold the represented traits as the standard. Prejudice forms and the viewer is not always to be blamed. When society has constructed such a concrete image of Asians being education-oriented or submissive, it is too easy to alienate them. Asians are no longer individuals with their own complex thoughts and lives with their unique fears and desires. They are the quiet people captivated by textbooks, or the soft-spoken shy students, or possibly the perfect scapegoat for a pandemic…

For those who do not reside in areas with diverse cultures, their entire perception of Asians may rely on what they see on the screens. But this does not necessarily have to be a detriment.

Hollywood is taking steps in the right direction by creating films that allow audiences to see more realistic views of Asians. These characters are nuanced and represent the complexities of a person, not what society thinks they should be portrayed as. At the 93rd Academy Awards in April, Youn Yuh-Jung was awarded an Oscar for Best Supporting Actress–the first Asian to win since 1957. She played the role of an unconventional grandmother in the critically acclaimed film “Minari,” refuting the classic nurturing notions the media typically portrays of Asian women. This is how change is established. This is the representation we need.

Some say that stereotypes have a foundation in truth, that you cannot completely discard these beliefs. Maybe to some extent, they would be correct. Labeling some Asians as smart or shy in movies isn’t necessarily incorrect, because like any other population, some Asians are introverted and some are bolder. But don’t misunderstand–it’s not because of our race, and there’s so much more to us than these generalizations. And once the media recognizes that, we can finally argue that we have representation that truly represents us.