The Wildcat Tribune • May 12, 2021 • https://thewildcattribune.com/12034/ae/she-would-never-know-navigates-the-realities-of-office-dating/

“She Would Never Know” navigates the realities of office dating 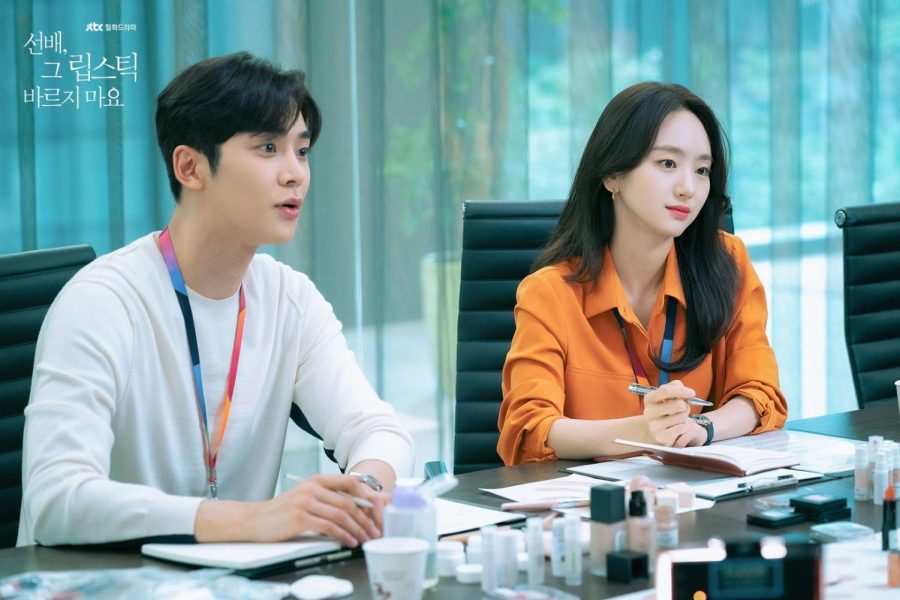 K-drama “She Would Never Know,” an adaptation of the webtoon “Sunbae, Don’t Put On That Lipstick,” aired its last episode on March 9, 2021.

The drama follows a group of marketers working at a cosmetic company called Klar, where Yoon Song-ah (Won Jin-ah) acts as a mentor and work partner to Chae Hyun-seung (Ro Woon). From the get-go, it is clear that Hyun-seung has feelings for Song-ah. We watch as he sneaks little glances at her, smiling at her actions, while Song-ah is oblivious to his interest. In their interactions, Hyun-seung continuously tests her boundaries, trying to see if she views him as a love interest.

However, Hyun-seung’s crush is bound to fail as Song-ah is secretly dating their brand manager, Lee Jae-shin (Lee Hyun-wook). Although heartbroken when he finds out, Hyun-seung prepares to give up on Song-ah until he sees Jae-shin bringing his fiancee Lee Hyo-joo (Lee Joo-bin) to his sister’s bridal shop — Jae-shin is getting married, and it’s not to Song-ah. Determined to show Song-ah the truth, Hyun-seung confronts Song-ah at work. During their conversation, he wipes her lipstick off, uttering the lines, “Sunbae, don’t put on that lipstick.”

Hyun-seung forces Song-ah to come with him to the bridal shop to witness her boyfriend cheating firsthand. As she watches Jae-shin accompany Hyo-joo to try on wedding dresses, her initial disbelief turns into anger, both at Jae-shin for his cheating, and Hyun-seung for the way he exposes Jae-shin. In an act of revenge, Song-ah and Hyun-seung start a fake relationship, one that Hyun-seung hopes will eventually become real.

Initially, Hyun-seung’s actions come off as creepy and almost stalkerish. While wiping someone’s lipstick might be okay in the webtoon world, in practice it just seems possessive. Song-ah is rightfully angry at him, as Hyun-seung’s behavior clearly oversteps her boundaries, and no one deserves to learn about an unfaithful partner by seeing them cheating in person. Although Hyun-seung’s reactions might make sense in the heat of the moment, they also make his character less likeable. Luckily, we quickly see his initial aggressiveness cool off as the show explores the reasons for his behavior.

On the other hand, Song-ah’s response to her partner’s cheating is much more realistic. Including her initial disbelief and disillusionment, she cycles through many different emotions as she deals with the pain. Facing a two-year relationship and a man she thought she would end up marrying, Song-ah initially clings on to the hope of Jae-shin choosing her over his fiancee. With her pride preventing her from exposing Jae-shin’s lies, she chooses to avoid him while dealing with her revelations separately.

As an act of revenge, Hyun-seung and Song-ah’s decision to start a fake relationship is such a stereotypical K-drama thing to do. The plot does help push it along, making the decision seem more natural. Although they are trying to make Jae-shin feel terrible, that doesn’t seem necessary as his situation already causes him so much pain.

In fact, Jae-shin seems to be drowning in his success. He relies on the Lee family for his current status, yet his achievements are downplayed and claimed instead by his obligatory friend and future brother-in-law, Lee Jae-woon (Lee Kyu-han). Hyo-joo’s threats of suicide have forced him into an unwanted engagement, and his father’s debts further strengthen his ties to the Lee family. Despite his pitiful past and present, Jae-shin’s actions of stringing Song-ah along (no matter how strong his feelings are for her) are as bad as Hyo-joo’s manipulation of him. Neither Hyo-joo nor Jae-shin are in the right place to marry each other — Hyo-joo’s suicide attempt only exemplifies that, as only her obsession with Jae-shin and the threat of her family is keeping the two together.

In the background of all the drama, Hyun-seung’s older sister Chae Ji-seung (Wang Bit-na) is pursued by Jae-woon. The couple acts as comedic relief to the more serious conflicts occurring between the other main couples. Hyun-seung’s second sister Chae Yeon-seung (Ha Yoon-kyung) also faces romantic problems of her own. Her husband’s eventual self-discovery spells trouble in her marriage.

While the show consistently uses common K-drama tropes, such as a fake relationship and a chaebol family, their usage is familiar and almost comforting. Instead, what might put viewers off is the initial actions of some of the characters. The show explores their flaws and gives them room to grow, but they are often unnecessarily aggressive and dramatic.

K-drama “She Would Never Know” takes on many roles. Sometimes rom-com, other times melodrama, the show never seems to take a break. Although the drama doesn’t have a standout factor, the subplots and romance in the show hold enough interest to keep the viewer engaged.