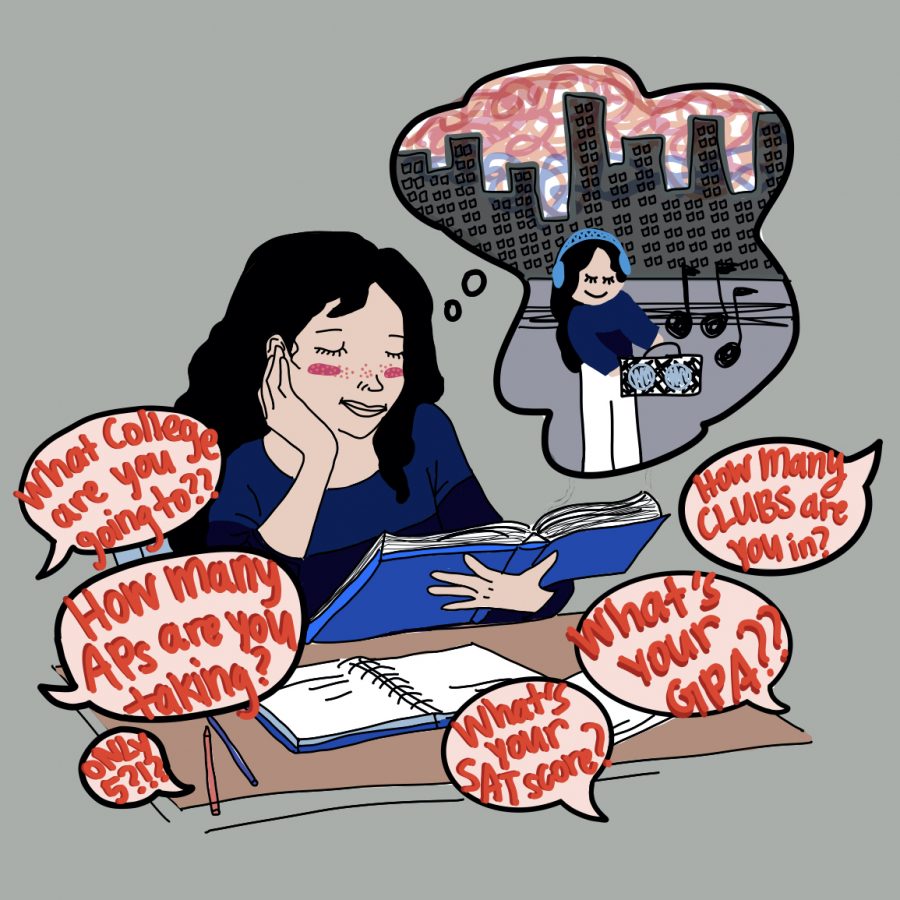 Students struggle to chase their dreams amidst the stringent expectations of Dougherty's status quo.

Dougherty Valley High school, located in San Ramon, CA, is widely known for its academic rigor. This rigor reflects onto the student body, establishing a condescending attitude in many towards those who don’t fit the school’s academic status quo.

During the second semester, a prominent question for most seniors projects through the hallways: “Where are you planning to go to college?” A simple question for most can hold deeper implications at Dougherty Valley (DV).

Manu Moganti, a freshman at Diablo Valley College and a member of DV’s class of 2020 recalls her experiences when she decided to take the community college route, noting that it took her a lot of strength in order to come to terms with attending a community college.

“In this community, where we emphasize academics and extracurriculars all for getting into a good college, anything below that is just looked down upon,” Moganti said.

Moganti recalls sharing her future plans with peers at DV during her senior year, specifically an instance with one of her fellow students in her Advanced Placement (AP) economics class. Moganti claims while everyone is outwardly supportive of her decision, it is clear that their true attitudes are condescending.

“It’s just so fake,” Moganti said, “They won’t outwardly express it but you can tell from their manners and how they act or what they say about other colleges, you can just tell how they feel about something like community college.”

This obtrusive elitism, however, extends much higher than community college on the college hierarchy. Moganti describes the culture of students derogating other colleges in order to illuminate their own.

“Especially around college admission times, people will try to make other colleges seem less than theirs. They [will] be like, ‘oh I don’t like this college it’s so bad’ and stuff like that,” Moganti said.

Sana Ansari, a senior at DV describes the negative stigma around going to community college but claims studying at many four-year universities also does not satisfy the status quo.

“You’re only smart if you go to an Ivy League or like a top UC university or something like that.” Ansari said, “That’s definitely the mindset here.”

Ansari explains how this perception of college admissions makes people feel ashamed to go to community college even though there is nothing wrong with it.

Instances such as these are numerous during the college decision season, especially at DV, and create a positive feedback loop of competitive mindsets because no one wants to be at the bottom of the college food chain. This approach to college admissions, however, is not beneficial. And while there are pros to a cut-throat competitive environment, there are also strong negative consequences.

To begin, a poll done by the Wildcat Tribune shows that around 85% of students of all grade levels at DV considered themselves “extensively stressed by school-related challenges.” This is a drastically higher frequency than the national average of about 50%, as reported by the Princeton Review.

Further than just stress, an environment that ties student’s self-worth to the college they are admitted to, their GPA or career choice ties strong negative emotions with nonoptimal grades. Rather than allowing students to decipher what success means to them, an environment such as DV’s puts emphasis on the status quo of societal success in high school.

“If you go to DVC then you kind of feel ashamed of it just because of the stigma around it,” said Ansari.

Experiences like these occur with frequency at DV. This sort of peer pressure makes students question their worth when they do not take rigorous courses or follow the status quo of the DV academic environment.

“There was a lot of pressure because I did feel like, oh I didn’t take AP calculus or these really tough science or math courses,” said Ansari.

Annesha Dey, a junior at DV continues to describe these pressures and speaks on how extracurriculars are a large point of stress for her. Dey speaks on how she consistently feels the need to run a club or do an internship, for example, simply because her peers are doing it.

“You look at what other people achieve then belittle yourself because you don’t have the same things as them,” said Dey.

Students report that this standard extends further than academic excellence. Stigmas around various majors favor the Science, Technology, Engineering and Mathematics (STEM) fields but look down on arguably less lucrative fields such as political science. Ansari plans to study environmental policy in college and shares the reactions she gets when sharing this with others.

“I feel like there’s some sort of unsaid judgment,” said Sana Ansari, a senior at DV.

DV Junior Faiz Hasnain shares similar experiences with Ansari and describes how his peers often degrade his intended major when he shares it with them.

“People say that some degrees are better than others […]They do realize that your path is successful but they just want to distract you by telling you the opposite,” Hasnain said.

There are benefits to a rigorous environment, however, as students do express how the highly competitive environment at DV pushes them to be better and allows them the opportunity to showcase their best selves. This environment also teaches students to be proud of who they are in the face of judgment.

Dey claims this environment has pushed her to be the best she could be and has motivated her to try new things that she would not have tried if she had gone to a school with less academic rigor.

“Having people around you that are intelligent and hardworking inspires you to be hardworking too,” said Dey.

Hasnain shares how through his experience at DV, he has learned to go against the status quo and express his true values even though the environment may not support them.

“For me, self-worth was tied to grades and what kind of classes I took but life is more than just grades and transcripts,” said Hasnain.

Hasnain speaks on how the environment at DV can be considered toxic in the sense that many people don’t want to see you succeed; a view Hasnain claims is caused by jealousy. On the other hand, Hasnain also describes the importance of having experiences like these and the lessons they have taught him.

“Learning that in high school is important because as you go beyond high school and beyond college, these philosophies are important,” said Hasnain.

It is apparent through these anecdotes that a judgmental attitude is prevalent in DV’s environment but where does this stem from. The influence of parents seems to be the source of such attitudes.

“Everyone here kind of looks at other people and thinks ‘oh they’re good if they are going to this college,’ but I think that is due to the background of people’s parents,” said Dey.

Dey shares how when her dad was going to school in India, scores from exams were posted on a wall in public for all to see.

“Everyone would go and see who’s at the top and who’s at the bottom and that’s kind of where that judgmental system came in,” said Dey.

This judgmental attitude towards those with lower grades originated overseas and accompanied many student’s parents when they immigrated to the United States. Like many students, Dey shares how she feels that she has inherited that mentality from her parents.

Many students’ parents are also first-generation immigrants. It is important to understand how many of these parents had to work immensely hard to get where they are today. From this, these parents value hard work and associate poor grades with laziness.

Overall, the condescending attitude many parents hold towards poor grades reflects on students. The effects of this judgment are felt throughout the student body, regardless of how many AP classes a student is taking or what their SAT score is.

It is clear that DV’s administration is aware of this culture on campus as the counseling department is taking steps to mitigate its effects on the student body. For example, DV does not have a class rank system, which ranks students from highest to lowest by GPA, nor is there a valedictorian.

In order to manage the stress caused by DV’s environment, counselors have paired up with students to create a wellness center. Sahithi Malireddy, a junior at DV, is on the board of this new wellness center and speaks on its purpose.

“We’re trying to destigmatize the challenges that kids with mental health issues are facing at Dougherty, especially kids that feel like they can’t talk about it because of this ‘Dougherty mentality’,” said Malireddy.

On Tuesday, March 16 Malireddy spoke to parents and Parent Teacher Student Association (PTSA) board members on the DV’s environment and what they can do to support students and help make a change for the better.

Efforts such as these are vital to creating a safer, more inclusive environment at DV and the actions of counselors and student advocates will go far in the battle against academic elitism.

Continuing campaigns to educate students, staff, and parents on this prevalent issue, such as Malireddy’s presentation at PTSA board meetings, is important to DV’s future. It is now the duty of the DV community to ensure that students do not feel judged based on academic results or their future plans.