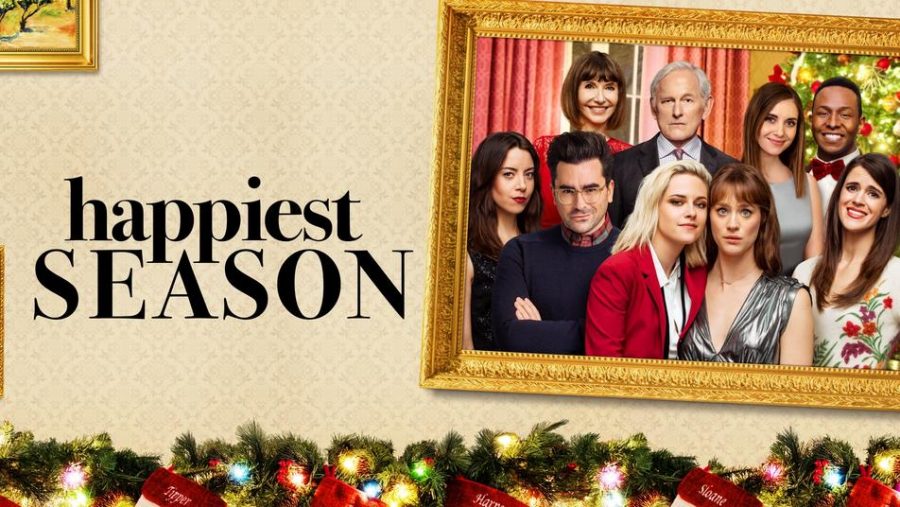 Released on Nov. 27, 2020, to an audience hopeful for some decent LGBTQ representation, “Happiest Season” delivered a disappointing plot and subpar acting that left us unfulfilled and irritated.

The Hulu original chronicles a conflict between Abby (Kristen Stewart) and her girlfriend, Harper (Mackenzie Davis). Harper wants to bring Abby home for Christmas — but there’s a twist: her parents don’t know she’s gay. This sparks a series of difficult situations for Abby, who was hoping to propose to Harper during the holidays. Co-written and directed by Clea Duvall, the movie was anticipated given its well-known cast featuring Stewart, “Schitt’s Creek” creator Dan Levy, “Community” actress Alison Brie and “Parks and Recreation” star Aubrey Plaza.

The film opens with a sequence that tries hard to be chaotic —  Abby and Harper are seen looking at Christmas lights and getting in trouble for climbing onto the roof. The two laugh and can’t keep their hands off each other; however, this five-minute scene must hold together the entire film, as it proves to be the only part where Abby and Harper are seen as a happy couple. From here, the movie bulges with tension and conflict between the pair.

Harper continuously hurts Abby, who continually fails to vocalize her pain. It’s a static exchange, and although the circumstances differ each time, the conflict gets old: 1. Harper messes up, 2. they smooth things over with a kiss, 3. the audience manages to feel both infuriated and bored. Excluding the last five minutes where Harper apologizes (dismally, it can be argued), the audience only sees the couple in agony. It becomes incredibly difficult to root for them as a couple.

The subpar acting of Davis hardly helps. Though Stewart gives an adequate performance (although all Abby really does is lower her head in submission anyways), Davis remains emotionless despite the turmoil her character goes through. Harper has to come out to a gruesomely maniacal family, complete with a conservative politician father, a socialite mother, and a rivalrous sister. That’s a lot of pressure, but Davis’ performance doesn’t flesh out the potential of these emotions. While Harper’s words carry weight, Davis’ facial features and physical actions do not enhance these lines in any way, making for a difficult-to-watch performance.

Despite Davis’ disappointing execution, there were bright spots in the cast. Dan Levy, playing Abby’s friend John, brought comedy to every one of his scenes. Using a running joke about killing Abby’s fish and delivering an impassioned pep talk to Abby about the fear of coming out, John was easily one of the most lovable characters, and exponentially improved the watch-ability of the film.

Yet, for a rom-com, “Happiest Season” was drearily lacking in comedy. The awkwardness of the situation — a lesbian couple pretending to be straight — had huge potential to be funny. The film was not lacking in awkward moments at all, but the laughter we expected at the expense of their discomfort was never fulfilled.

Another highlight: Jane (Mary Holland), Harper’s other sister and a lovable, shameless kook. She was the odd one out of the family (in every sense of the word), but she also had what Holland called a “deep level of self-acceptance.” Unashamedly bizarre, with the personality of a sugar-high golden retriever, Jane was an endearing presence but severely underused in the film.

The other standout performance of the movie was Aubrey Plaza’s portrayal of Harper’s childhood friend and ex-girlfriend, Riley. With a suave but charismatic personality, Riley made the audience fall in love with her (something both lead characters failed to do). The chemistry between Riley and Abby is undeniably more potent and irresistible; it is one of the movie’s biggest faults that the supposedly happy ending left many viewers upset.

The failure of the creators to notice the chemistry between Stewart and Plaza highlights flaws in the writing, and becomes another of the unnecessary and unnatural plot points the audience has to endure.

Happiest Season was plagued with numerous plot lines that were so forced that viewers were left saying “what?” There was the time Harper and her sister Sloane (Brie) raced an ice-skating lap in a showcase of outlandish sibling rivalry; if it was meant to be comedy, it only raised some eyebrows in despairing cringe. There was also Harper and Sloane’s horrible and dismissive treatment of their third sister, Jane. And there was the time Sloane’s children framed Abby for stealing — this was difficult to watch, and it didn’t help that Abby merely bowed her head and bore the blame like the doormat she had proved herself to be.

Of the many disastrous plotlines, one that deserved much more attention was when Riley revealed that Harper had outed her in high school, then proceeded to spew rumors about her to their classmates. This inexcusably mean-spirited and heinous action was glossed over all too briefly. Harper never apologized to Riley and closure was never fully achieved, sending a message to the audience that outing someone is a trivial matter that can be overlooked with time.

This message alone rendered the show’s LGBTQ+ representation as questionable. Glossing over an issue as severe as outing someone makes one wonder if the creators understood the weight of the topic.

This is seen again when Abby is upset with Harper for continuing to hide their relationship. John tells her, in one of the film’s most moving moments, that everyone has a different coming out journey. Abby proclaims that she deserves to be with someone who has completed that journey — in one of her only (and long-awaited) moments of assertiveness. However, less than ten minutes later, Abby and Harper make up and the movie ends without ever acknowledging Abby’s declaration that she is at a different stage of life than Harper. This emphasizes the lack of thought put into accurate representation as well as the laziness of the writers to quickly wrap up their film without too much complexity.

With its many outstanding issues — some bizarre, some unnecessary, and some plain inexcusable — watching “Happiest Season” added nothing to our lives except a passionate topic over which to rant about. It was neither “rom” nor “com,” but a mediocre excuse for both. Watch for the LGBTQ+ representation if you must, but don’t expect it to make your season any happier.