Three people who want the COVID-19 vaccine voice their opinions 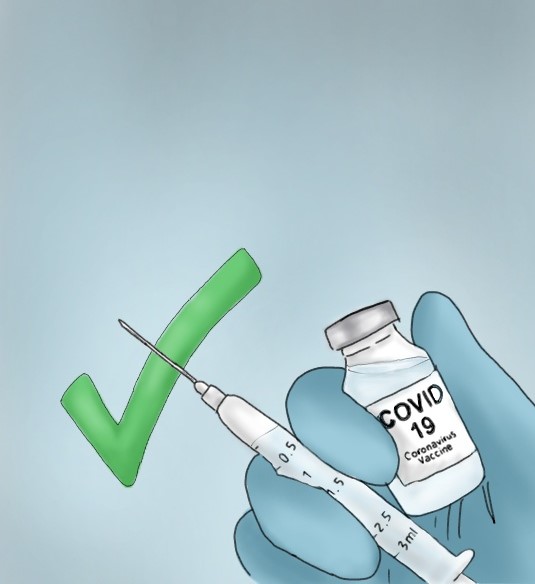 More people start to think positively about the vaccine compared to when it was first announced.

On Dec. 11, 2020, the Federal Drug Administration (FDA) approved the use of the COVID-19 vaccine. Since then, it has been a topic that many people have talked about, with some people voicing their opinions. As of Jan. 27, 2021, khn.org says 47% of the American population has said that they want to be vaccinated.

The only vaccines that have been approved by the FDA for national use are the ones made by Pfizer-BioNTech and Moderna, and others like AstraZeneca are in the third phase of testing. The vaccines were made in a short amount of time, but scientific research shows us that the vaccines are both safe and effective, as only eight people have fallen ill from the vaccine out of the 22,000 people who have been vaccinated as of  Dec. 21, 2020. The Pfizer vaccine was shown to be 95% effective against the virus, with only eight people getting sick after receiving it, compared to 162 people being sick with the placebo. Meanwhile, the Moderna vaccine was shown to be 94.1% effective against the virus after getting both shots.

In-Soo Moon, a senior citizen who received the vaccine, said, “First of all, it’s very safe, scientifically. It’s better than nothing. I feel much better [after getting the vaccine]. And you know the virus [has] a lot of bad effects. So it cannot be protected [against] 100%, but still, it is better than no vaccination.”

Sean Choi, a restaurant owner who wants to get the vaccine, said, “There’s no treatment except the vaccine right now. We don’t have any specific medicine; We can’t take care of COVID-19. So [the] vaccine is the only way we can prevent the spread of more.”

Mrs. Dearborn Ramos, a health teacher at Dougherty Valley High School, said, “Yes, I do [think the vaccine is safe], based [on] scientific research and studies that have been done by the CDC and the WHO. I’d feel less exposed to the virus and the potential symptoms that could arise.”

Choi said, “There are about ten times more [side effects] than the regular flu vaccine, but it is a tiny amount so it’s going to be very safe right now, and all people have said it’s safe. And the only people who have side effects are old people, or [people with] some kind of allergy.”

“[I trusted the vaccine] from the very beginning; I trust science,” Moon said. “It’s approved by the FDA or the health providers. The vaccination I had before is already approved by the doctors and FDA and the government, so I trust it.”

The CDC urges the public to get the vaccine if possible, to create herd immunity and somewhat slow the spread of the virus.

The different viewpoints regarding the vaccine all point to the same reason: trust the vaccine by trusting scientists and doctors. Based on the opinions of those that want to be vaccinated, it is essential to get the vaccine to ensure the health of both ourselves and the people around us.

“It’s a very personal choice, who wants to be [vaccinated], or who doesn’t want to do that, but for myself, whenever it is available and approved, I’d like to have [the] vaccination to protect myself and my family,” Moon said.