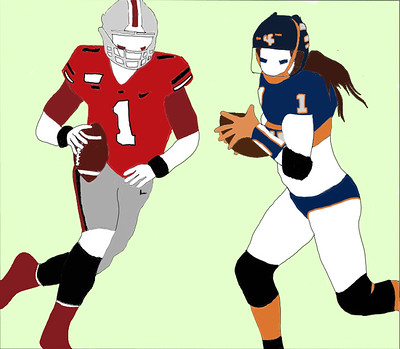 The women who dedicate their lives to pursue their passion, with rigorous training and mentally draining tournaments, should be acknowledged and valued for exactly that — not a fabric of clothing that they are sexualized through

“Let’s go watch the girls at the volleyball game” is a phrase probably articulated by every teen boy ever. A phrase that emphasizes how the sexualization of women in sports diminishes their value and reinforces previously held stereotypes about female sports. And though many things play into these consequences, the largest of all: sexualized uniforms for female athletes.

Since the 19th century, women have been put in clothing that emphasizes their gender. In 1870 women baseball players wore long, corseted dresses. These types of dresses were normal until about the 1920s when fashion began to change and skirt lengths became shorter. Many variations of uniforms occurred through fashion trends and needs of different sports but what remained extremely consistent was the fact that female uniforms were never exactly the same as those the men wore.

Fast-forward to today where volleyball uniforms provide a prime example of this discrepancy. Men are expected to wear loose-fitting knee-length shorts and tank tops while women are placed in small bikinis drawing quite a lot of attention from the male gaze. It is said these uniforms are made so the athletes can have the full range of motion as they are playing but couldn’t women reach their full potential with shorts and tank tops too? After all, they seem to work fine for the men.

Often in sports, women are not even allowed to enter the tournament unless they meet the required standard for uniforms, and if they are, their choice if clothing is heavily scrutinized. Most tennis players will practice in shorts, regardless of gender, so why is it that when the time comes for a tournament, they are not allowed to have this same freedom? This is not to say that women should only wear tennis shorts, but rather they should have the choice to wear what is most comfortable for them. In 2019, world-class athlete Serena Williams received backlash at the French Open after wearing a catsuit, which was actually worn to prevent pregnancy blood clots. It seems as though there was more discussion over the women’s’ clothing rather than their actual play, yet again, making the women’s’ side of the sport to be taken less seriously.

Most likely the worst form of sexualized uniforms in sports history is women’s football, which offers little to no protection. These uniforms look as though they took inspiration from a bikini, and then added an extra layer of protection around the neck area. Compared to the male version of this uniform, filled with padding, layering, and almost no skin showing, one would assume a female football player was actually going to the beach instead. Recently, companies such as Adidas have included quarter length bottoms in the attire, but it is clear from how long it took to get to this point that safety is not the priority

Melissa Marguiles was an MVP running back for the Los Angeles Temptations and key cog to the team winning three-straight Lingerie Bowl titles from 2009-2011. The Lingerie Bowl, later rebranded to be named Legends Football League, is a female football championship where women play American football in lingerie. As if that isn’t crazy enough, in a 2015 interview Marguiles said that the league — in particular, Mitch Mortaza, the chairman of the Bowl — had players benched because they didn’t “meet the standard of attractiveness.” “Bigger girls” were told to lose weight, furthering that physical appearance, not football ability, is what the LFL leaned on. The fact that such an organization even exists in the first place, disregarding the safety and health of the players for the sake of more views, is disgusting. To think that changing the name of the organization would make up for the way in which these women’s bodies are sexualized is a grave mistake and only a sign that this issue needs to be discussed and investigated further.

So the question becomes: why are they put in these sexualized uniforms in the first place? The answer very simply has to do with marketing. Media representatives know that photos of a woman in a bikini bent down and ready to serve a volleyball will generate more readership. Marketing executives know that catering towards the male gaze will increase ticket sales to games.

In brainstorming how to improve the viewership of women’s soccer FIFA president, Sepp Blatter said “Let the women play in more feminine clothes like they do in volleyball. They could, for example, have tighter shorts. Female players are pretty if you excuse me for saying so, and they already have some different rules to men – such as playing with a lighter ball. That decision was taken to create a more female aesthetic, so why not do it in fashion?”

This mindset emphasizes the sexualization of female athletes so much that their sport is the last thing people think of. It’s not “let’s go watch the volleyball game” it’s “let’s go watch the girls at the volleyball game”. The fact that the women are playing is the last thing people think about because their whole focus is on the way these girls look. And it is further emphasized by media and marketing executives who utilize this for their own monetary gain. Not only is it disgusting to use sexualization for your own benefit, but their actions also fuel the larger problem that no one takes female sports seriously.

Male athletes’ uniforms are practical for their needs and ensure the only focus is on these athletes’ quality of play. Their bodies are not the focus, their talent is. However, Dougherty Valley varsity volleyball player Shrena Sudhakar explains how the problem does not necessarily pertain to the uniforms themselves, rather, the mindset of viewers and spectators.

“I believe that our current uniforms provide the utmost flexibility because they allow us this freedom of movement. However, spectators of our sport will use the short, spandex shorts of our jerseys as means of scrutiny and sexualization,” Sudhakar said.

Essentially, these sexualized uniforms by such viewers of sports are part of the broader problem in that women are sexualized for almost every profession they are in, reinforcing gender roles in the process. Whether that be a librarian, nurse, or athlete, the media and men that run the show find a way to sexualize women, an idea that young generations grow up watching and becoming normalized to. Rather than being respected for the hard work they put into the game, they are respected for bringing in the bucks for larger companies solely because of their physical appearance.

The solution lies in two factors, the most important one regarding the spectators sexualizing uniforms in the first place. Targeting where such a mentality comes from, whether that be a deep-rooted societal issue, or from how the media and entertainment industry portrays womens’ sports, is the first step in addressing the problem. The second solution is to simply offer a variety of choices of uniforms, within reason, that both men and women can choose from. The women who dedicate their lives to pursue their passion, with rigorous training and mentally draining tournaments, should be acknowledged and valued for exactly that — not a fabric of clothing that they are sexualized through.