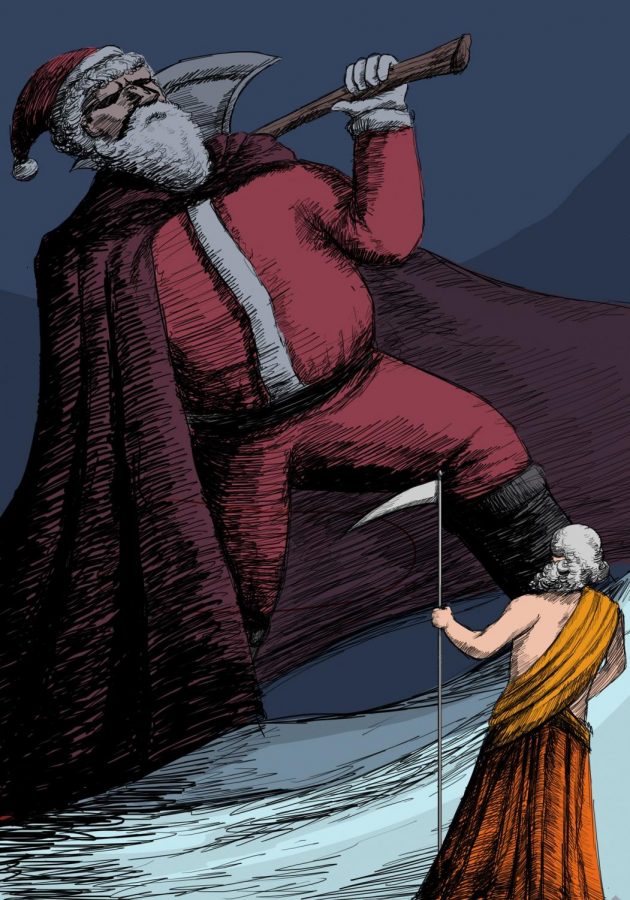 I recently went to the grocery store to buy barley and slaves. When I went to the checkout, something shocking happened. The cashier had the audacity to say to me, “Happy Holidays!” It is utterly preposterous that the great holiday of Saturnalia is lumped together with worthless holidays like Candle Day and Carthaginian Candle Day. When I heard this vile attack on Saturnalia, I spit out my coffee, which is when I realized that the Starbucks coffee cups don’t have any reference to Saturnalia, the greatest and most important holiday of the season.

It was at that moment that I realized that something was amiss about the world. I ran through the streets, throwing barley at people to get their attention and asking them if they knew what Saturnalia was. Not a single one of them knew. At first, I thought that this was just because they were stupid, but then I asked my son what his school was doing to celebrate Saturnalia. His answer astounded me.

I even saw a man dressed up as that cult leader wandering along the streets indoctrinating people into turning their backs on Saturnalia. I attacked him with a nail gun, as any good Roman would, but a large red man with a beard stopped me. His red clothing and face tipped me off that I was face to face with Mars, the god of war. I tried to explain to Mars that I was trying to execute an undead criminal, but he dragged me to a courtroom instead. The judge sentenced me to 20 years in jail, even though I clearly explained how I was the defender of Saturnalia. It became clear to me that the most powerful forces in society, from the government to the schools to Mars to even Starbucks, the most powerful and influential entity in America, were all conspiring to work against Saturnalia. That’s when I knew that the ignorance that masses had when it came to Saturnalia wasn’t the product of ignorance, stupidity, or lack of interest, but a full-scale War on Saturnalia.

Somehow I was released from jail on bail. My 3000 followers had posted on Instagram and Twitter about the injustice that I was facing because of my belief. I was happy to be free for now, but I knew that I had to stop the War on Saturnalia. Little did I know that the war had just begun.

With the pandemic in full swing, the War on Saturnalia has only escalated. When I tried to gather with my 3,000 friends at the Temple of Saturn to publicly sacrifice a pig, the meeting was broken up over “public health concerns” and “attempting to murder a police officer.” A lot of people got really mad at us for the second thing, which I don’t understand. Unless we honor Saturn, we will always receive poor harvests and everyone, be they police officers, law enforcement, or pig, will suffer.

Some of you may wonder why I so strongly advocate for Saturnalia’s restoration. Some of you may not comprehend the true importance that this obscure agriculture holiday has to our society. The real reason for celebrating Saturnalia goes beyond just pleasing Saturn and ensuring harvests. The real reason we need to celebrate this incredible holiday is that it is so important to our culture. America is a Roman nation. Everywhere you look, you can see the influence of Rome in America. It is in our most important governmental buildings, which harken back to the architectural styles of Rome. It is in our national motto: the Latin words

E Pluribus Unum. It is in our governmental system, an elegant system inspired by the Roman Republic. Rome is the bedrock of America, and when we lose sight of our Roman roots, we lose sight of all the things that Rome inspired that are so important to America. Democracy. Justice. Slavery. Income inequality. Military overspending. Fighting long and futile wars in the Middle East. By not celebrating Saturnalia, we lose sight of all of these important things and make America what it is.

In order to give Saturnalia the place in society it deserves and protect our precious barley, I have formed a Super PAC. We are seeking donations from everyday concerned citizens (and also oil billionaires) who envision an America with plentiful barley, pig sacrifices, and Starbucks cups that have sickles on them. We will start small by supporting local representatives and city council members who believe in Saturnalia. Then, we will move on to the Senate and finally the presidency, unseating the ungrateful despots who wish to spite the great Saturn and restoring America to its rightful place as a Roman nation.