SuperM becomes “one” with Kpop in the release of their sophomore album, “Super One” 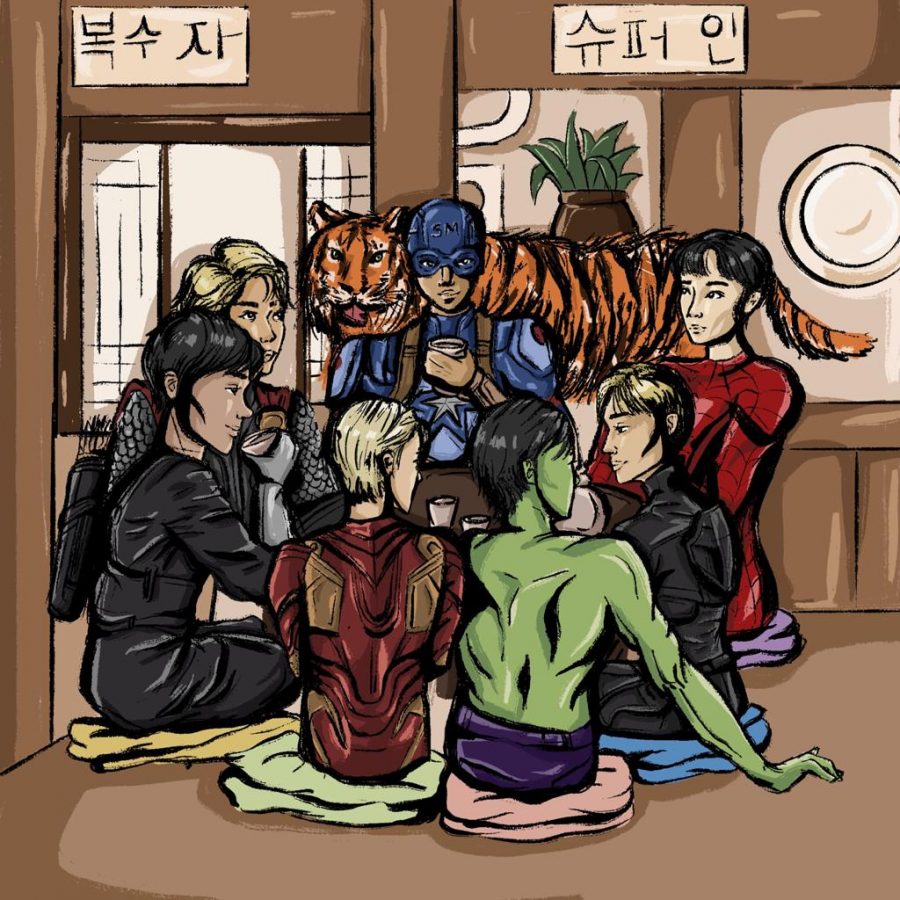 SuperM unleashes a new persona in their album and establishes themselves as the “Avengers of Kpop”.

SuperM is a seven-membered group from Seoul, South Korea. The supergroup consists of the subjectively strongest members from each boy group under SM Entertainment: Taemin from SHINEE, Baekhyun, and Kai from EXO, Taeyong, Mark, Lucas, and Ten from NCT. Their diverse skill sets, experience, and adaptability has allowed them to create strong, performance-based music.

SuperM entered the K-pop scene with their debut single “Jopping” and their first EP, SuperM, which charted as number one on Billboard 200 as the first-ever Korean act to achieve the title on their first-ever release as a group. Since then, SuperM has embarked on multiple other ventures, including their first-ever world tour, “We Are The Future”. They also were the first act to open “Beyond Live”(A series of concerts held under SM entertainment for their various artists).

Throughout their inspiring journey, fans have been anticipating new music. After the release of SuperOne, it’s safe to say that they weren’t disappointed.

The album opens with “One (Monster & Infinity)”, a mashup of the two succeeding tracks, “Monster” and “Infinity”. This is the first time that SM has released a mashup since the chart-topping “Sherlock (Clue + Note)” from Shinee in 2012. Melding the chorus of “Monster” with the intro and rap verses of “Infinity”, the song is rooted heavily in dubstep, which aligns with the futuristic appeal that the group has embodied in previous releases. The lyrics maintain that agenda as heard in the chorus, “Catch me in the latest, driving spaceships/ Landing in the matrix tryna break it”, while also encouraging listeners that, “If you’re aiming anywhere, aim high” just as they have as artists. The track provides a powerful and energizing opening to the album, immediately drawing listeners in for more.

The fourth track, “Wish You Were Here”, uncovers a completely different side of the group with a soft serenade. The plucking of string instruments contrasted with the upbeat drumming and the soft vocals paint the perfect picture of a sunny day on a tropical beach. Yearning for a lover, the members sing, “Different night, the same moon/ Different memories and different feelings/ Are you thinking of me too?/ I wish you were here.” The song demonstrates the group’s versatility as they break away from their usual bold, futuristic concepts to a slower song that showcases both their vocals and rap talents while embodying a more vulnerable and emotional facet of their artistry.

Released as a single before the album, title track “100” falls in parallel with their band concept of being unstoppable and showcases their identity as “Avengers of K-pop”. Co-written by group member Mark Lee, the song is electrifying and energetic; “There ain’t no turning us down/ You know we taking the crown/ We go hundred.” Perfectly embodying their traditional sound and rhythm, the track is littered with unsettling mechanical and industrial auditory elements that match the music video’s theme of automobiles. Though it does align with their reputation as superheroes, the concept itself is underdeveloped and lacks a storyline.

Honing into their masculinity in their next track,  “Tiger Inside”, the song showcases the group’s deeper, lower voices. Adhering to its title, rapper Taeyong’s growls tie the music to the theme, along with predatory vocals from the rest of the members. Though the message of the song is unclear due to inconsistencies in translation, the group seemingly sings about allowing one to unleash their inner beast, “A tiger inside you/ Let you free in this world more widely/ All your worries bite them.” Optimism shines through in this track and their stage performances exude charm and character.

Another song that deviates from a typical SuperM song is “Better Days”.The song is performed entirely in English and draws inspiration from the 90s R&B boy band sound. The song is a vocal-heavy track performed on a grand production level featuring an organ, tambourine, and a serene piano melody. SuperM serenades the listeners with optimistic lyrics and assures them that “there’s gonna be better days”.

However, this melancholic vibe is swapped with a more sensual rhythm in tracks such as “Drip”, “Step Up” and “So Long”.

In the song “Drip”, the rappers use fun and upbeat flow and the singers create intricate runs over the multiple trendy production elements: ad-libs, handclaps, trap beats, and vocal percussion. When asked to explain the idea behind the song, the main rapper Mark Lee elaborates “Through the interaction, you have with a person you are interested in, the  tension that exists between the two people is what we wanted to convey in the song.” It’s evident that the seductive tone of the piece accomplishes in communicating the intended message to listeners.

“Step Up” and “So Long” give off smooth R&B vibes, almost reminiscent of “No Manners” from their previous album. These songs give the singers performance time to show off their skills during the various runs, octave changes, and complex harmonies written in the track.

These complex harmonies bleed into their song “Dangerous Woman”. They perform a series of strong harmonies in the intro reminiscent of Ariana Grande’s track with the same title. However, the rest of the song contrasts with Grande’s original in terms of the genre with the upbeat melody and rap. Fans get to listen to combinations of members singing together who have never sung together before, a refreshing feeling for those who are familiar with SuperM’s music. The highlight of the song is Ten and Taemin’s vocal blend, creating an explosive fusion that hasn’t been explored in SuperM’s music until now.

The finale of the album presents listeners with “With You”, a track filled to the brim with cloyingly sweet romantic lyrics sung with sincerity. The song has elements of the pop music genre, vocal runs and flourishes run from Baekhyun, and Lucas’ balanced flows. The group had previously previewed this song during their world tour and also performed it during their virtual concert at the One World: Together At Home. In “With You” SuperM gives closure to an album filled with energy and surprises.

In SuperOne, SuperM showcases what gained them their fervent and supportive fanbase: vibrant visuals, stunning melodies, and their sincerity. SuperM keeps the crown for the “Avengers of Kpop”.