These Halloween songs will haunt your mind 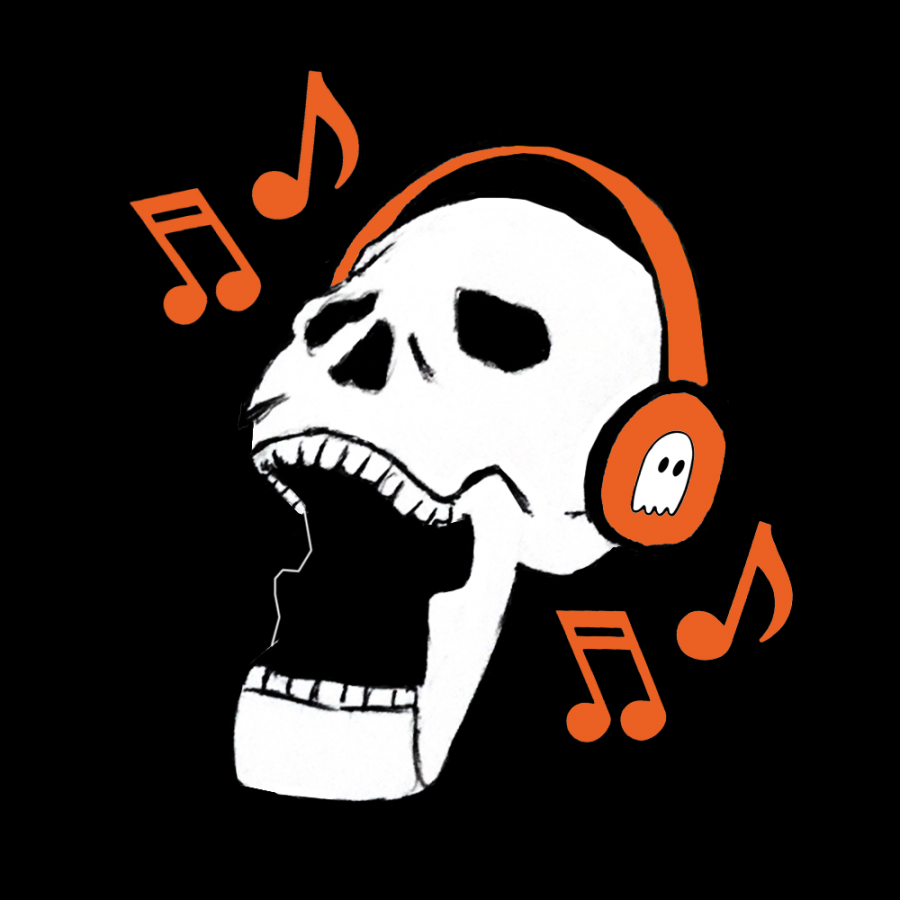 These ten spooky songs will surely scare you to shambles!

Spooky Scary Skeletons
Written in 1996 by Andrew Gold as a childrens’ novelty hit, “Spooky Scary Skeletons” has been putting people in the Halloween mood for years. The combination of many unique sounds such as the xylophone have helped this song become so popular that several electronic dance remixes have been created and used throughout several platforms such as TikTok. Despite its alliterative nature, the song is easy enough to sing, with the chorus being its title, repeated over and over. A definite crowd-pleaser, this song is sure to put anyone (not just skeletons) at a Halloween event in the spooky spirit!

This Is Halloween
From the well-known 2006 film, “The Nightmare Before Christmas”, “This Is Halloween” is quirky and ghoulish with an array of various monsters’ voices, some whispering and some shouting. The chorus is welcoming and intimidating at the same time, welcoming “boys and girls of every age,” yet chanting threats such as “trick or treat till the neighbors come and die of fright,” creating an almost comically spooky song that match the personalities of the silly ghosts, vampires, and monsters in “The Nightmare Before Christmas.” Each verse of the song is unique, with each new voice introducing itself smugly, threatening the audience in a sweet voice that contrasts with the lyrics, “I am the one hiding under your bed.” Chock-full of cackles and ghastly threats, “This Is Halloween” is perfect for all ages, and the music is a definite cult classic.

Somebody’s Watching Me
“Somebody’s Watching Me” starts off with some drums that continue throughout the song, adding on instruments and sounds such as percussion, synths, and vocals. With an upbeat synth-funk sound and a repetitive, catchy chorus combined with added dialogue in between notes, “Somebody’s Watching Me” is exactly how one would expect a Halloween song would be. However, despite the classic Halloween beat of the song, there is an unusual story behind its inspiration — when Rockwell was younger, he remembered neighbors always attempting to see inside their apartment by sticking their heads out of their windows. Later, when he grew older, he lived with a girl who was often on the receiving end of many of his pranks. He often scared her when she least expected it, which is where the idea of someone “watching” him came from. Featuring Michael and Jermaine Jackson as additional background vocals and chorus, “Somebody’s Watching Me” is one of Rockwell’s (born Kennedy William Gordy) most popular songs.

Monster Mash
Few songs manage to set a scene so clear as “Monster Mash.” The instrumentals bring the song to life, with the lighthearted music working beautiful with the bubbling sounds. It’s one of the most known and beloved Halloween songs for a reason — it’s one of the catchiest songs on this list. The simple lyrics and melody of the chorus make it a memorable classic. The vocals scream “mad scientist” without over exaggerating. If a song about the mash is so good, you can only wonder how incredible the subject was. It’s cartoonish in all the best ways. It paints a fantastic picture of the laboratory and all its visitors. Nostalgia only makes this incredible song even better. This Halloween classic is always a smash hit — a graveyard smash, if you will.

Ghostbusters!
“Ghostbusters!” is one of the most iconic Halloween songs. You can’t think of Halloween without thinking of ghosts, and you can’t think of ghosts without thinking of “Ghostbusters.” The instrumentals steal the show, working greatly with Ray Parker Jr.’s vocals without overpowering or underpowering them. Both the instrumental and the vocals are distinct enough to stand on their own, but together they make something beautiful. While it’s not necessarily goofy in the same sense as other songs, it’s very upbeat and not eerie at all. The simple lyrics and melody would not have had nearly as big of an impact without the fantastic arrangement and vocals that make “Ghostbusters!” a staple of Halloween.

Desolate
One of the more haunting songs on this list, “Desolate” by David O’Brien captures the horror side of Halloween perfectly. Everything about it screams paranoia. The combination of a traditional orchestra, dubstep, and electronica creates something hauntingly beautiful. While you might not know this song by name, you’ll likely recognize it through documentaries and web series, most notably “Buzzfeed Unsolved.” The eerie and unnerving calmness is only made more alarming with the chimes and echoes in the score. This isn’t something you’d want to listen to at night. The arrangement is gorgeous but chilling to the core.

Scooby-Doo, Where Are You?
“Scooby Doo” did more for the horror genre than Stephen King, and this song did more for the music industry than the Beatles. “Scooby Doo, Where Are You?” is a classic that will really get you in the Halloween spirit. There’s been hundreds of renditions and each always brings out a different aspect of the original, whether it be horror or comedy. And that’s what allows each rendition to work — they always embody the original. But the sense of goofiness and spookiness in the original is pretty synonymous with “Schooby Doo” as a whole, and makes it a true classic. The simple melody and lyrics, along with the serious nostalgia, make this song perfect for Halloween.

My Girlfriend is a Witch
The sixties charm and the cartoonish feel make “My Girlfriend is a Witch” perfect for Halloween. The song really draws you in through the instrumentals. They’re upbeat while having a touch of eeriness. The way the instrumentals complement the vocals creates a comforting, yet off-putting atmosphere. For a sixties song, it really has a sense of modernity that makes it less nostalgic and more reminiscent, if such a distinction could be made. It’s not as spooky or goofy as the other songs on this list, but it does have the same cartoonish vibes that older songs tend to have. And that’s just another testimony to the fantastic arrangement. While it’s not a classic, it definitely has the potential to become one.

Thriller
Released in 1982, the popular Halloween hit, “Thriller”, opens with a door creaking open, footsteps and the sound of wolves in the distance, starting off the Michael Jackson classic with an eerie tone. Starting off slow and becoming more upbeat as it continues, Michael Jackson’s vocals move with the pace of the song, whispering at first then singing higher. However, apart from Jackson’s precise, light vocals, the instruments used in “Thriller” deserve at least partial credit to the supernatural atmosphere of the song, specifically the pipe organ, electric guitar, drum machine, trombone, saxophone and different synths. Furthermore, in addition to the creative use of such a wide array of instruments, the sound of a dog howling and whistling in the background really completes “Thriller”, which is arguably more of an experience than a song. Despite being in the pop genre, the song is impressively ominous, combining several genres together to create the perfect ghostly Halloween song.

Moreover, if you thought the song was impressive, the music video makes “Thriller” even better. As a concept, this song was made to be more comical than genuinely scary, inspired by the childhood terrors Jackson suffered through as a child after his father, Joseph Jackson, put on a scary mask and scared him through the window in order to remind young Michael Jackson to close his windows. However, this clearly backfired and for years, Jackson suffered from nightmares, and sometimes even became afraid at the sight of his father. In the music video, Jackson takes his girlfriend, played by Ola Ray, to a horror movie which she doesn’t like. He reassures her and tells her to go home, but they are suddenly surrounded by several gang members, cornered. The rest of the video consists of Jackson singing and dancing in ghastly, skeleton-like makeup with the gang members. Arguably Jackson’s most iconic music video and one of his most iconic songs, “Thriller” is definitely a Halloween song that will be remembered for more decades to come.

Calling All the Monsters
“Calling All the Monsters” is one of the most iconic Halloween songs of the 2010s. Its upbeat, dance and electro-fused pop background with strong vocals made it an instant classic. Like “Thriller,” the pop song has a very prominent beat, but powerful vocals. But, it doesn’t incorporate different sounds to set the Halloween mood, and stays a pop song through and through. Despite this, it manages to embody the Halloween spirit without being comedic or frightening, which is incredibly impressive for a pop song. It has that very distinct, buoyant Disney Channel sound, while not being completely limited by it. Disney Channel songs often have similar vocals and instrumentals because of how Disney operates, but the iconic China Anne McClain, lead singer (at age 13!), embraced this instead of trying to work around it, and was able to keep it from being just another A.N.T. Farm song. It’s very reminiscent of that particular Disney Channel era, bringing back memories of waking up just to watch A.N.T. Farm all day, while also remaining modern with a unique focus on China’s vocals, giving the audience a peek into her talents beyond acting. Her voice takes center stage above the instrumental, but it’s powerful enough to stand on its own. Although the instrumentals do add to the song, China’s voice stole the show, letting the song stay relevant even without the nostalgia factor. The song is also very upbeat and inviting, perfect for a Halloween party, with the song almost calling the audience — the “monsters” — to sing and dance along with China.“Calling All the Monsters” is our generation’s “Thriller.”